Season 6 of Bachelor in Paradise has had its fair share of drama — from Blake’s feud with Caelynn to Jordan’s epic fight with Christian — but tonight it all comes to an end.

Now, we’re left with four couples: Demi and Kristian, Chris and Katie, Clay and Nicole, and Dylan and Hannah G. So, who will go to the fantasy suite? Who will get engaged? Who will break up? And who will spill the tea during the reunion show later on tonight?

Let’s find out all of that and more with the final recap of Season 6:

“I’m excited to show you,” he tells her. The next morning, they wake up in good spirits. Still, despite their overnight date, Katie admits she’s still unsure if he’ll propose.

Down on the beach, Chris tells her that she’s “everything” he’s been looking for, and Katie seems genuinely shocked that he’s finally expressing himself. “I can’t imagine a second without you,” he tells her before getting down on one knee. Katie happily accepts! Yay. What could go wrong?

Before heading to the fantasy suite together, Hannah admits that there isn’t a doubt in her mind that she wants to “continue forever” with Dylan and of course he feels the same way. That boy has been in love with her since the moment he met her. And I’m not sure if that’s a good thing or a bad thing.

The next morning, Dylan confirms he’s going to propose (DUH), so Hannah walks down to the beach to get her ring. Hannah tells him that she’s “terrified” and “really scared of being broken again” after Colton Underwood broke her heart on The Bachelor. Dylan insists that her heart is safe with him before getting down on one knee.

Hannah stands there in complete shock for a good five seconds before Dylan tells her, “You have to answer!” She of course says yes.

It’s clear something’s missing between Clay and Nicole. While the other couples seem to finally be getting on the same page, Clay admittedly has reservations. He tells her he’s not 100% confident in their relationship, but still Nicole is hanging on.

This dude isn’t even beating around the bush — he’s being pretty blunt about the fact that he does *not* want to propose to Nicole. Instead of going to the fantasy suite, he tells her that he wants to take the night to “think things through.”

Nicole doesn’t understand what Clay could possibly have to think about, despite all of the reasons he’s listing for her.

It’s time for a proposal and it’s truly mind-boggling that Nicole doesn’t know whether or not a Neil Lane ring is coming.

Still, she meets Clay on the beach and gives him her proposal speech. Again I ask, WHY? What are you doing, Nicole? Fans noticed that the recently split couple was missing in action at the 'Paradise' reunion — and here's why.

After going on and on and on about how much she loves him, she asks him if he feels the same. He tells her that he’s *starting* to falling in love, which is a slap in the face considering Nicole has already picked out their kids names.

Clay seems to want to pursue a relationship with Nicole, but his lack of commitment is not enough for her, so she voluntarily leaves alone.

He doesn’t seem too fazed by the breakup, saying he’ll “stop at the local pub” after departing the show.

It’s clear Demi and Kristian are very much in love heading into the “engagement moment” on the beach.

“Leaving here engaged to Demi would be a dream come true,” Kristian says. “If we were not to get engaged today, I would be really hurt.”

On the beach, Demi thanks Kristian for being patient with her while she sorted through her struggles. “I can’t here to find myself, but I found myself in you.” OMG, TEARS.

Demi pulls out a ring and gets down on one knee and proposes. Kristian immediately says yes and the two share a romantic kiss. YAY.

“I didn’t think I’d ever get engaged in Paradise, but I’m so f–king happy,” she says.

And that’s a wrap for the finale! Now, it’s time to get an update on all of the Paradise drama. Read on for all of the highlights from the reunion:

Caelynn and Dean are still dating

Caelynn apologies to Connor for blindsiding him when she left Paradise to be with Dean, but ultimately, she couldn’t be happier with her decision. Things are still going strong for Caelynn and Dean, with Caelynn even admitting that she “loves” her life in a van with her new boyfriend. But don’t feel too sorry for Connor who seemed to have gotten the short end of the deal — he’s now spending time with Whitney, so clearly everything worked out the way it’s supposed to.

Blake and Caelynn are still feuding

So, Blake takes the hot seat and once again, we take a trip down memory lane about all of his sexual conquests. Isn’t this a bit repetitive at this point? Didn’t we already do this all season?

“Paradise was really hard for me from beginning to end, I feel like I hurt so many people,” he says. One of those people being Caelynn, who still seems to be butting heads with Blake after all of this time.

From what the surprising texts said to how the rest of their 'Bachelor' friends have reacted, we're breaking it down!

“The reason I released the text messages is because of the allegations you made that were not true,” he says.

“I’ve never felt so exposed. That was the lowest of the low,” she admits, telling him that he slut-shamed her.

The cast keeps asking Blake to just bury the hatchet and say sorry to Caelynn, and finally, he caves. “I tried to get my truth out and I’m so sorry you got attacked. I want to apologize to everybody because it seems like a lot you feel like my actions before Paradise ruined some of your experiences.” Tayshia and John Paul Jones are back together

The rumors are true! Despite their heart-wrenching breakup on the beach, Tayshia and John Paul Jones reconnected after Paradise ended. During her sit-down interview with Chris, Tayshia reveals that after leaving the show, she regretted ending things with JPJ, so she flew to Maryland to go after her man.

“I’m a bold girl,” Tayshia admits with a smile.

@tayshiaaa is a bold girl and we’re here for it! 👏😍 #BachelorInParadise

We cut to a clip of Tayshia showing up at JPJ’s door and he admits it’s been a “tough couple of weeks” since their breakup.

“John Paul Jones, I want to explore things with you,” she says.

“This is the most pleasant surprise that I ever had,” he replies before asking Tayshia to be his girlfriend. TEARS!

Katie and Chris are struggling

Despite their engagement on the beach, Katie alludes during her interview with Chris that things might not be all roses off-camera. In fact, she admits that she’s “exhausted” from putting in so much effort into her relationship. She’s also not wearing her engagement ring.

“The whole time at the beach, he would tell others that he loved me and the only way I knew that Chris loved me is the way he tells everyone else, not the way he shows me,” she says. “The things he said and the things he did seemed so different.” 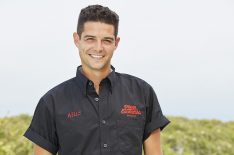 The bartender spills on that JPJ-Derek fight, who surprised him most, what people actually drank, and whether fiancé Sarah Hyland made it to 'Paradise.'

Though she claims they’re still engaged, she seems really unsure about their future.

“I don’t want to end things. I’m just conflicted,” she says. And so, out walks Chris to come face-to-face with Katie.

Chris admits that he “doesn’t know” why Katie isn’t wearing her ring, but comes clean that they have been having issues. Katie also touches on the fact that watching the show back and seeing how much Chris struggled with his feelings was hurtful for her.

“I thought I was going to watch you falling in love with me,” she says. “I’ve never been so insecure in a relationship.”

Ultimately, Chris tells her that he’s going to work on being a better partner for her and she puts her engagement ring back on. Honestly, I’d like to be excited for these two, but I just can’t see them going the distance if it’s been this hard so early on. But, fingers crossed regardless.

OK, that didn’t take long — we cut to footage of Chris and Katie arguing backstage over their on-air segment with Chris Harrison. Chris admits he felt “blindsided” by everything Katie threw his way. Sigh. I give these guys two weeks…

Of course Hannah G. and Dylan are still together, but they’re also moving in together. That’s literally the only update we got from the couple because everything else is so. damn. predictable. and ABC only dedicated 15 seconds to them. It seems like the bad boy has finally learned his lesson.

Demi and Kristian are happier than ever

Demi and Kristian walk out on the stage looking as happy as a newly engaged couple could look. Though Demi struggled with her sexuality throughout the season, she says it’s been “liberating” to no longer be hiding a secret.

“The hate is drowned out by all of the love,” she says. “I feel like we’re celebrating now.”

Before wrapping up, Kristian pulls Demi to the center of the stage to propose to Demi, since she didn’t get a ring during the original proposal. After a beautiful speech, she gets down on one knee and places a Neil Lane sparkler on Demi’s finger. Peth says there was 'no insult to anyone's intelligence' and he's 'never slept with a podcast listener.'

Although there were plenty of great guys to choose from, ABC ultimately went with Peter Weber as the next Bachelor star.

“I truly look forward to finding my girl,” he says. “I feel like the luckiest guy ever. I have all the faith in the world that this is going to work out for me.” “There’s going to be ups and downs, I know that’s coming,” he continues. “The possibility of making the wrong decision is out there but I’m going to follow my heart. As cliche as that sounds, I trust this. I can’t believe this.”

Congrats, Peter! His journey will kick off January 6.