How Long Is ‘Bachelor in Paradise’ Really? The Truth About Filming

Contestants on The Bachelor and The Bachelorette are expected to fall in love — and then get engaged — in less than three months, but the process is much different for the couples on Bachelor in Paradise.

Though the show is typically on television for six weeks, the actually filming process only lasts about half that time. Ahead of the Season 6 premiere in early August, spoiler blogger Reality Steve revealed that Bachelor in Paradise filmed for about 21 days in June 2019.

So while production attempts to make viewers believe a rose ceremony happens every week, in reality, these ceremonies occur every three to four days. That means contestants are coming and going every few days, as well.

It’s also easy to tell how long contestants are off filming because of their Instagram activity, or lack thereof. For example, Hannah Godwin posted on June 4 and then didn’t return to Instagram until July 1. Likewise, Demi Burnett’s last post before heading out to film was on June 3 and she returned to social media on July 1, as well.

Despite the fact the show is less than a month long, many of the couples who have come off the show have had great success.

From Season 2’s Jade Roper and Tanner Tolbert to Carly Waddell and Evan Bass from Season 3, to even Season 5’s Astrid Loch and Kevin Wendt — who got engaged in September 2019 — many of the relationships end up making it down the aisle. 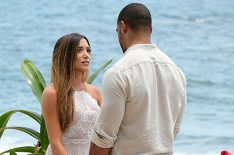 Think about it — over approximately three weeks, these contestants have absolutely no distractions on the beach and only spend time with the person in which they’re interested. Makes sense it could work out, right?