'Yellowstone' Continues to Be a Ratings Hit With Season 4 Finale

Did Yellowstone Go Too Dark?

Question: What do you make of the fact that Yellowstone has drawn far more viewers this season even as virtually all of the characters have careened toward the dark side? I mean, who’s a good guy anymore other than Kayce? — Sandy B, Hudson, N.H.

Matt Roush: What the blockbuster ratings tell me is that after pent-up demand for Yellowstone’s long-awaited fourth season, the show delivered on its promise of high drama, explosive conflict, and outrageous behavior to such a degree that people kept tuning in, even in more-or-less real-time. If you’re asking me to lament the fall of civilization because of the popularity of a show with so many despicable characters, I’ll pass. For me, the show feels like Dallas if it had been produced for HBO. Yes, Beth is too much (marvelously so), but even she knows that. And I take some exception with your overall observation because it seemed to me that John Dutton (Kevin Costner) actually softened up a bit this season. He took pity and begged for mercy on behalf of activist Summer (Piper Perabo) — and not only because he bedded her — and nearly tossed Beth off the ranch because he was so repulsed by her cavalier cruelty toward someone she saw as a rival for her daddy’s affections. Who knew he even had a moral compass? And though they’re hardly model foster parents, Beth and Rip took young Carter under their wing and he seems to be flourishing. If you’re looking for a hero besides Kayce, look no further than Jimmy’s evolution into an actual cowboy this season. This doesn’t mean Yellowstone has become touchy-feely by any measure, but I’ve seen far bleaker shows. Plus: the scenery is gorgeous.

Four Out of Five Dentists Choose 1883

Question: Judging from the amount of mail you have received about the “dirty mouths” on Yellowstone, I thought you might be amused with my complaint about its prequel, 1883. The costuming and makeup departments have done such a great job at making everyone look historically accurate, grimy and unwashed, that it is distracting to see almost everyone’s gleaming perfect white teeth in contrast. Isn’t there something the actors could swish around their mouths to at least give the illusion of bad teeth? — Dan S '1883' Is Paramount+'s Most Watched Original Series Premiere Ever

Matt Roush: You’re right, this did amuse me. I can’t remember the last time I fielded a request for poorer oral hygiene. But you do have a point, that most pioneers probably couldn’t navigate by the sheen from their teeth. I’ll probably think about this every time I watch the show going forward, so thanks for that.

Unhappy About Streaming’s Bait and Switch

Question: Affording multiple streaming services can be a problem, but I find the Paramount+ drug-lord business model most offensive. Watch The Good Wife but pay for the sequel. Enjoy Evil for a season, then pay up for more. Several seasons of SEAL Team, then we’ve got you. Should I ever trust another CBS offering? – Tom 'SEAL Team': 9 Burning Questions for the 2022 Return on Paramount+

Matt Roush: Short answer: Yes. I doubt CBS will ever put the network’s successful crime dramas and comedies behind the paywall first — although as we’ve seen most recently with 1883 (also from the ViacomCBS family), spinoffs are now off the table. Still: I’m sure whatever the next FBI series Dick Wolf comes up with (FBI in Space?), it will air first on CBS.

Typically, networks cancel shows before they move to streaming, and as I’ve argued before, The Good Fight probably would never have been green-lighted if not for streaming, and Evil was such an outlier on this most traditional of networks that moving to streaming may have been its salvation. (SEAL Team remains an aberration, and there’s no defending that move, except perhaps that it can now go grittier without network standards to worry about.) Regarding 1883, after it opened with a bang, the head of ViacomCBS Media Networks boasted that it’s “proof point of our unique model to leverage our linear platforms and franchise our biggest hits to supercharge Paramount+.” Once again, a sign that the industry is leaning into streaming as its future as the old models of ad-supported broadcast and cable programming diminish. 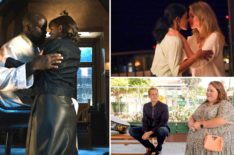 The Suds-ification of Prime Time

Question: It seems to me that prime-time programs are now emulating old daytime soaps. The storylines of programs like New Amsterdam and Station 19 spend half their airtime placing the actors in the beds/bedrooms of the actors and a majority of the other half of their airtime discussing those encounters while operating on some poor accident victim (Amsterdam) or discussing them while riding in the cab of a fire engine (Station 19) to a fire we may, or may not, see for 3 minutes. Unless the actor’s sexual encounters are part of the overall plot, why add it to the program week after week? What does the planned wedding of two firefighters have to add to an hour program on Station 19, week after week? Are the writers of these programs so lacking in imagination and ability that this is the best we can look forward to? Or do viewers like myself just look for something else to watch on a different channel? — LaVonne S, Joliet, MT

Matt Roush: This is hardly a new phenomenon, and some shows balance the procedural and the personal more effectively than others. (The formula has kept Grey’s Anatomy thriving for longer than any prime-time medical show in history.) There’s an argument that these characters — whether doctors, firefighters, police officers, lawyers, name your procedural profession — deserve to exist on a deeper level than mere workplace automatons, which means getting to know them personally on and off the clock. The challenge is to make their personal lives more interesting than merely who they’re sleeping with. The Sky Is Not Falling

Question: Can you tell me if ABC’s Big Sky is coming back for another season? I have been watching it from the beginning and it did not have an ending, with a lot going on. I did not see any notice of its going on hiatus for a period of time. Please tell me that it will be back and when. I would hate to see it just stop and leave everything up in the air, as some shows have done in the past. I have been checking your listings of returns and cancellations with no mention of Big Sky. — Jackie

Matt Roush: Not to worry, Big Sky will be back later this season — most likely Feb. 24 (the return date for the aforementioned Station 19-Grey’s Anatomy combo, also on Thursday), because ABC is sparing its Thursday dramas from competing against the Winter Olympics. And for much of January, they’re on hiatus while the historical docudrama Women of the Movement airs, which again avoids the trap of starting, then stopping, then starting, which also gets viewers riled. 13 TV Deaths That Wrecked Us This Year

And here’s an early warning: Production on many shows is again being affected by the latest Covid surge, so don’t be surprised if there are more disruptions going forward in the back half of the season. Safety first, everybody.

Comment: I’m hoping Big Sky will get renewed but am concerned that ABC did the show a disservice by stopping and starting many times. David E. Kelley may have been better served to have the show air on cable. It is very gripping for network TV. I try to get friends to watch from beginning as it is hard to jump into. — Charles

Matt Roush: You may be right that Big Sky would play better on cable, but it was significant that David E. Kelley brought the show to ABC, where he had enjoyed years of success before moving on to cable, premium cable and streaming, most visibly with Big Little Lies, The Undoing (for HBO) and Nine Perfect Strangers (Hulu). Big Sky’s more serialized thriller format is a bit different and risky for network TV, and the erratic nature of network scheduling doesn’t work in its favor. But for now, ABC is sticking with it. Question: I really appreciate all the inside information you have on our favorite shows. With Nancy Drew being moved to Fridays, is it less likely that the series will be renewed for a fourth season? I really enjoy the group and all of their antics. Please reassure me that they are likely to get another season. — Kristine

Matt Roush: It’s never a good sign for a show to move to Fridays (unless it’s on CBS), but with The CW, which rarely cancels anything after it gets past the first season, I wouldn’t be so concerned. Lately, the network has been fairly transparent about announcing the final season of a show in advance, so that’s another hopeful sign that Nancy and the Drew Crew will keep going for at least another year. More problematic are the recent reports that the network is on the market, which could mean all bets are off regarding The CW’s many low-rated shows once it’s no longer a joint venture between ViacomCBS and WarnerMedia should that become the case. 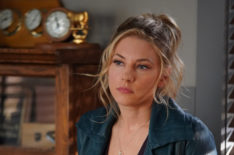 'Big Sky': Katheryn Winnick on Jenny Coming to Terms With Her Feelings for Travis