Question: I guess my question is, “What were they thinking?” The core of the story of the novel Little Fires Everywhere is the relationship between Mia/Pearl (a Chinese mother/daughter) and the Chinese baby that a white family adopted. Did the producer (Reese Witherspoon?) think that African-American is interchangeable with Chinese since they’re both minorities? Or was this supposed to be a color-blind TV series? Or worse, did they think that somehow Kerry Washington (admittedly a great actress) could play Mia much better than any number of Chinese actresses. Or maybe they couldn’t find a young Chinese girl to play Pearl? I was going to start a subscription to Hulu so I could see this new series as well as several others that appear only on Hulu. But now I won’t, so Hulu also loses with their decision to “tweak” some of the plot lines. — Roberta

Matt Roush: When I read Celeste Ng’s novel Little Fires Everywhere (which I enjoyed, as I did Hulu’s limited-series adaptation; see my full review), I never considered that Mia and Pearl were Asian-American. In fact, when I went back and scanned the opening chapters, I didn’t see any mention of their ethnicity. (I checked out several reviews and synopses and also found no evidence of this.) I can see how that assumption might have been made, because of the background of the author and the inclusion of several Chinese and Hong Kong immigrants in the narrative. But to me, the casting of Washington (who’s also an executive producer, along with Witherspoon’s company) was spot-on, especially when Elena (Witherspoon) offers Mia (Washington) a job as “house manager” — excruciating white-liberal-guilt shorthand for maid. Race is most definitely an issue in Little Fires, and that intensifies when the custody of the Chinese baby becomes a major subplot, but for me this is really a story of mothers in conflict: tightly wound Elena, bohemian Mia and Bebe, the Chinese immigrant mother. I hope you’ll reconsider and give this one a chance. 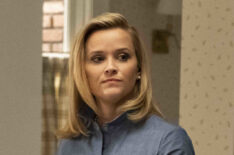 Question: I think it is fair to say that for most people, it has been a really rough week, with the sudden shutdown of most things that constitute normalcy in our lives. So I was especially pleased to turn on Zoey’s Extraordinary Playlist Sunday night. I’ve been a big fan of this ever since you recommended the pilot, but I found it particularly cleansing this week. Even when we are watching Zoey struggle, as she certainly did with her feelings for Simon in particular, the show itself is so much fun to watch. Of course, the musical sequences are a big part of that, but if the songs were all that was compelling, I wouldn’t love it as much as I do. I like that the characters are all fundamentally decent people and that their stories seem natural and warm and real, even wrapped in the fantastical conceit of Zoey’s power. It is a pure pleasure to spend an hour with them every week and to watch their growth. The episode just made me feel good and I had a big smile on my face during most of it (except for the parts which were intentionally sad, but even then I was invested and happy to be watching the show.) What do you think of the show’s progression, and what else would you recommend watching right now for a dose of happiness? — Jake

Matt Roush: Zoey is one of the few shows I truly look forward to each week, and I’m especially impressed at how it juggles broad comedy and heart-tugging sentiment within the same episode (sometimes in the same song). So far, it has lived up to its promise, and I agree that it’s a tonic during these unsettling times, when we’re more of a captive audience before the TV than usual. It’s hard, though, to know what brings others joy, but a short list of recommendations would include catching up on, or even rewatching, the three seasons of the reimagined One Day at a Time on Netflix before its debut on Pop TV (which rescued it from cancellation) on March 24. Schitt’s Creek is in its final weeks, and immersing yourself in that wacky world is worth your time, and Freeform’s Everything’s Gonna Be Okay was a real surprise. Netflix has a number of fresh comedies in its bottomless playlist, including Atypical, Sex Education and the recent Gentified — and of course there’s always Amazon Prime Video’s The Marvelous Mrs. Maisel. On network TV, I’m high on Mom, the recently concluded The Unicorn and Brooklyn Nine-Nine, among others. The list goes on, and there’s nothing more subjective than comedy, but there are plenty of ways to find your bliss while staying safe.

Artists Are Good Sports, Too!

Question: With sports on hold, TV network schedules are going to have big gaps in programming, especially on weekends. Why not substitute arts programming: local, regional and national singers and bands (including artists targeted to kids, even music festivals), comedians (we especially need more comedy), magicians, circus artists, etc., who no longer can do live gigs? It would be a Win-Win-Win for TV, artists and viewers. — Maurice

Matt Roush: It would certainly beat rerunning hours of recycled tournaments from years past. This is an honorable idea, especially if there is pre-existing footage of acts such as these. (PBS has a large catalog of performing-arts specials that would be wonderful to revisit during this time.) But bringing bands and other performers into a studio defeats the current purpose of limiting exposure under any circumstances, so I’d be surprised if we see anything like this happen, at least for now.

Crazy for That Rabbit

Question: I just stumbled across a show I really enjoyed. Year of the Rabbit on IFC had me laughing out loud with its clever writing. Can you tell me anything about it? I missed the first two episodes and couldn’t get them On Demand. And, as always, thank you for your helpful reviews and suggestions. — Lorna

Matt Roush: This Victorian-era detective spoof really is a hoot, as I noted in my review when it premiered mid-February. (Some episodes are available on IFC’s website, and it runs through March 25 on Wednesdays.) The six-episode series first aired in the UK last summer, and its star (and occasional co-writer) Matt Berry can also be seen in FX’s uproarious vampire comedy What We Do in the Shadows (scheduled to return for a second season on April 15). Best news: Rabbit has been picked up for a second year. Question: Why are shows having their series or season finales in March? Back in the old days, it was May. — Rodney

Matt Roush: More often than not, many prime-time series that begin in the fall still finish their seasons in May — although production delays because of the coronavirus outbreak may affect that this year. There are several factors behind early spring finales of certain shows: shorter episode orders, which could be either a creative or economic decision, and/or fewer repeats (which create their own flurry of complaints), meaning that some shows that might once have stretched out their run into May now end sooner. The networks are also into sharing time periods, especially during this midseason period, which either interrupts a show’s run by trying out a new series in its time slot or ending the season earlier than before. While there still exists a traditional broadcast-network season from late September to mid-May, the networks are a lot less tied to this timetable than they once were. And Finally… A Clarification

Question: Per an interview of Martin Freeman, the cursing of kids on Breeders was done without kids. They said lighter things when filmed with kids and then filmed the cussing without the kids present. — Pete

Matt Roush: My mistake, and apologies. FX also reached out to clarify that “the young actors were shielded from the profanity … It’s something the production took very seriously. If a particular scene contained strong language, they’d film with alternate dialogue when the children were present. Once the children were off set, the scene would be filmed again with the stronger language. The versions were edited together.” I feel much better now. But the point remains that by no means is this a “family” sitcom intended to be watched by kids the age of the children on the show. (It’s on FX, people.) That’s all for now. Thanks as always for reading, and remember that I can’t do this without your participation, so please keep sending questions and comments about TV to [email protected] or shoot me a line on Twitter (@TVGMMattRoush), and you can also submit questions via the handy form below. Please include a first name with your question. Stay safe and healthy!

Year of the Rabbit where to stream