[Warning: The below contains MAJOR spoilers for Season 2, Episode 4 of 90 Day Fiancé: The Other Way.]

Cultures clash this week as the couples travel internationally to be with their loved ones. From a smuggled alcohol bottle to surprising apartments, let’s see what these lovebirds have in store.

Some people are keeping secrets and have a lot of explaining to do once they land.

Jenny flies over 26 hours to India. She’s beyond excited to see Sumit but has thought of three requirements if their relationship will continue:

“If not, then it’s over,” she strongly states. After five months of being apart, Sumit is ready to see Jenny again. The two are giddy once they reunite.

“This is my happiness right here,” she beams.

They head to Sumit’s apartment. His new place, in his words, is “underdeveloped” because he’s trying to save money during his divorce.

Meet the first batch of new couples making the move for love.

After opening up to his sister, Armando now tells his parents about his new relationship with Kenneth. Both of his parents cry and embrace him after Armando explains the pain he’s been hiding in not fully sharing his sexuality with them.

“It’s a beautiful feeling to hear [from my mom] that she loves me, that I’m her boy. That’s what I needed in my life,” Armando says in a confessional.

“As parents, the pride we have as Mexicans, is what hasn’t let us see beyond reality that he’s gay,” his father, Armando Sr., explains. “I feel I found happiness with Kenneth and that’s where I want to be,” Armando tells them. “I hope that…you’ll accept me with him.”

His father says he’ll need time to think about whether he wants to visit Armando and Kenneth once they move.

Deavan, her mother Elicia, and her two kids prepare to leave for the airport. She can only hope that Jihoon is ready to be an adult this time. “This is a huge gamble…I gave up my life in America and everything I’ve ever worked hard for to start this new life with Jihoon,” Deavan says. “This is actually a really big deal, and it’s terrifying.”

Yazan sits down with his mother and father to discuss fiancé Brittany’s upcoming arrival in Jordan. The biggest concern for Yazan’s dad is whether or not Brittany will convert to Islam. Yazan assures him that she will wear the hijab (something she just told him she would never do), and they will wed as soon as possible. The mountain of lies both from Yazan and Brittany threatens to topple their relationship before she’s even landed in Jordan.

Ariela packs for her permanent move to Ethiopia. Her mother makes sure Ariela packs medical supplies, and she has requested an epidural kit for her labor and delivery. Ariela’s mom explains to the camera how risky an epidural injection can be since it occurs near the spine, so she hopes the Ethiopian physician can properly administer it. The following morning, Ariela and her mom leave for the airport. “I’m really sad,” Ariela cries after saying goodbye to her father and sister.

“The sadness comes with happiness too,” her mother assures her. “Hopefully when we get to the end of this journey, there will be happiness on the other side.”

Jobless but Not Hopeless

In South Korea, Jihoon meets with friends ahead of Deavan’s arrival. His pals ask about Jihoon’s plan to support his family of four, and he admits he “doesn’t really have a real job.” He’s been doing deliveries but that’s barely enough money. He had previously told Deavan that he had a new position working with tile. “I lied to Deavan because if I have no money, Deavan’s not coming to Korea,” Jihoon justifies.

“He’s making a fool out of Korean men,” his friend tells the camera.

Jenny arrives at Sumit’s house, and he has organized a housewarming ceremony for her move. “When I first walked in my house, a priest is putting a flower pot on my head and I’m just looking around going ‘what’s happening?'” Jenny says. As she walks through the house, she notices how much of a “mess” it is. 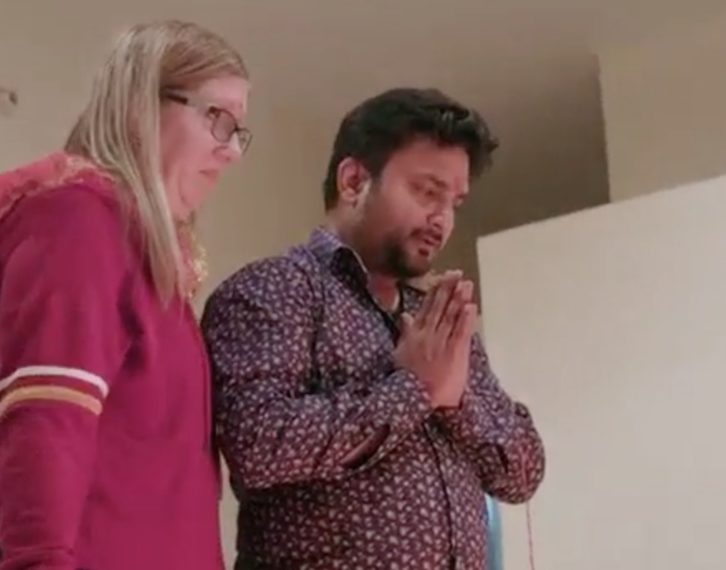 “We don’t have extra money to fix up this house,” she says in a confessional. A ceremonial cow also walks through the house as a sign of good health and wealth. “We are poor now,” Sumit chuckles. “We need to be more careful. Crime ratio is very high over here.” Jenny is rightfully worried.

Just the “Sip” of the Iceberg

Brittany lands in Jordan. “I just can’t believe I’m home,” she gushes. Yazan meets her in the airport with a bouquet. They embrace and tell one another they love each other.

Off-camera, apparently Brittany shows the TLC crew members she has a bottle of alcohol in her luggage. Yazan sees it and flips out. “F**k you, f**k the Brittany. I am so stupid,” Yazan yells as he gets in his car. He told Brittany specifically she can’t drink in Jordan, but she still packed liquor. “I’ve never seen him act like that and it was scary to me,” Brittany talks to the camera. “I’m not proud of his behavior at all. I’m actually very disappointed.”

“This is exactly what my parents warned me about. Brittany either doesn’t understand or doesn’t care about the traditions or the country I live in,” he says.

“Of course I respect his culture and his choices but at the same time I am not Muslim,” she counters. “It reminded me of the way my ex behaves and so if he’s going to behave like my ex then I don’t want anything to do with him.”

'90 Day Fiancé: Happily Ever After?' Premiere: The Pursuit of Happiness (RECAP)

This season promises to be a rollercoaster of arguments, cheating allegations, and new loves.

Kenneth says goodbye to his family to go to Mexico. Another couple is introduced, and Biniyam’s friends call Ariela a “mistake” like his ex-wife. Jihoon’s family meets Deavan’s mom Elicia, and Brittany confronts Yazan about his response at the airport.

It’s all next week!

My Life In 7 Suitcases

« EPISODE 3
Heart My Broken
EPISODE 5 »
Wing and A Prayer