’90 Day Fiancé: The Other Way’s Jenny Slatten Is Proof ‘There Is Hope’ for Long-Distance Love

90 Day Fiancé: The Other Way star Jenny Slatten knows a thing or two about long-distance romance. Last season, Jenny travelled to India to be with her beau of eight years, Sumit. Unbeknownst to her, Sumit was actually already in an arranged marriage, and Jenny was the other woman.

After lots of heartbreak and a move back to her hometown of Palm Springs, California, Jenny is now returning to India in Season 2 to give Sumit another chance — and hopefully tie the knot.

Ahead of the new season, Jenny opens up to TV Insider about how her relationship with Sumit persevered, how she’s adjusting to the Indian culture, and what it’s like to be a long-distance success story within the 90 Day Fiancé franchise. 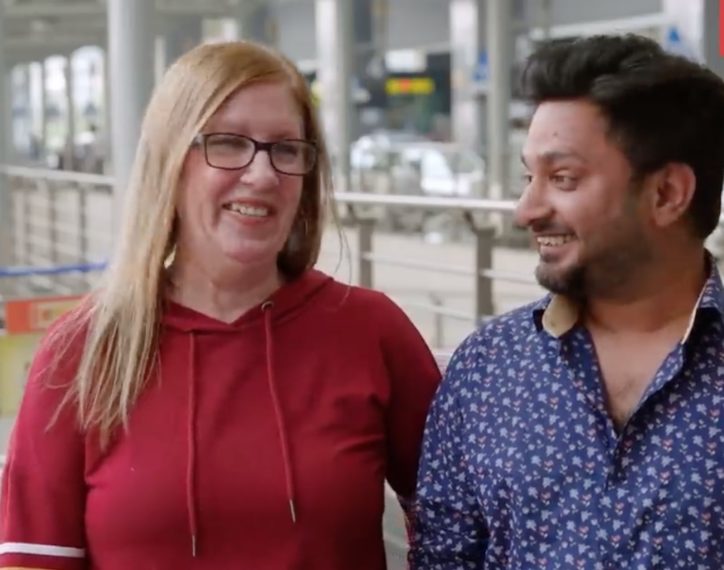 Last season, we saw you move to India to be with Sumit, only to find out later he was in an arranged marriage. You went back to Palm Springs but at the Tell All, you and Sumit were still together. How has that healing and forgiveness process been like?

Jenny Slatten: We never broke up, that never happened. Of course I did leave India because I had to for two reasons: you know the first reason, and the second reason was because of my visa. Our relationship never ended. We never broke up. I knew that he was going to get his divorce so I just went back and waited for that to happen. So that’s pretty much what I was waiting on, for him to get his divorce. We’ve always loved each other very much.

Congratulations! It’s nice for viewers to know you’ve found happiness. This season we see you’re back in India too. Was the second time moving there easier leaving your family and friends in Palm Springs?

Yeah. I’m really close with my family but my daughters totally understand that I’m happy with Sumit and that we’re happy together. I’ve been in this relationship for a very long time. My daughters completely support me, and they support us together. It was easy. I miss them but they want Mom to be happy too, just like I want them to be happy. They’re adults, they’re living their own lives now so they don’t really need Mom there anymore.

Last season your daughter Tina and her wife Jen surprised you in India, which was a touching scene for viewers. Will we see more of them this season?

I’m hoping for that, my fingers are crossed. I’d love for my daughter to show back up. It was a major moment in Season 1 when Sumit stood up for you against those in India who questioned your age and background as an American. How was fitting into the Indian culture the second time around?

It’s no problem for me. I’m comfortable. Being in India is ok for me. I’m comfortable there, I don’t have any problem with it. I can fit into the culture because I’m a pretty kind person, pretty open-minded. I just kind of go along with things and how they are. I don’t argue and fight or complain about anything. I like India, I really do. I really like the culture, I like the way the people are. Everything in India I like, except of course arranged marriage! India as a country and as a people is a nice place. I really like it there.

Will we see you interacting more with Sumit’s family this season?

I don’t really know yet. I haven’t really been having any interactions with them as of yet, but I can tell you that it’s going to be difficult. As you saw in the first season, it wasn’t easy, and it won’t be in the second season either. '90 Day Fiancé: The Other Way': Meet the 6 Americans Moving Abroad for Love

Being part of TLC’s 90 Day Fiancé franchise is huge. Do you watch the other 90 Day Fiancé shows? Who are some of your favorite couples?

I do watch them. I like all the couples. I think all the couples are great. I don’t really have any favorite couples. I think everybody is good, we’re all on the same show, in the same boat together. If I had to pick a favorite couple though it probably would be David and Annie just because I’ve met them and I’ve talked to them. I see them doing really well and I do like them a lot. Jihoon and Deavan from Season 1 are also returning for a second season. Do you stay in touch with Deavan at all? What do you hope fans will take away from watching your relationship with Sumit unfold onscreen?

Long distance relationships can work and they do work. We’ve been in our relationship for a long time, over 8 years. We started talking in 2011 online. There is hope. I share my story with the world and the world sees that it can work and it does work. What they can take away from it is there’s hope out there. I do get contacted from a lot of women that are in that same exact kind of relationship as I am and they all are asking me for advice. I never knew there were so many women out there in these kinds of relationships. Everybody wants my advice.