‘Shameless’: Lip & Tami Have a Ghostly Setback in ‘Slaughter’ (RECAP)

[Warning: The below contains MAJOR spoilers for Season 11, Episode 5 of Shameless, “Slaughter”]

Shameless returns after a few week off with a bang in the latest installment, “Slaughter.”

The title may bring to mind some bloody scenarios — and murder does cross Frank’s mind when it comes to the Gallaghers’ newest neighbors, the Milkoviches — but what it actually refers to is a lot funnier, as Lip (Jeremy Allen White) and Tami (Kate Miner) encounter an unusual problem with a house. Meanwhile, Frank’s (William H. Macy) quest to eliminate the growing Milkovich virus grows, well, inventive. Find out what’s going down in the South Side for them and the rest of the gang in the breakdown below, but beware of major spoilers. 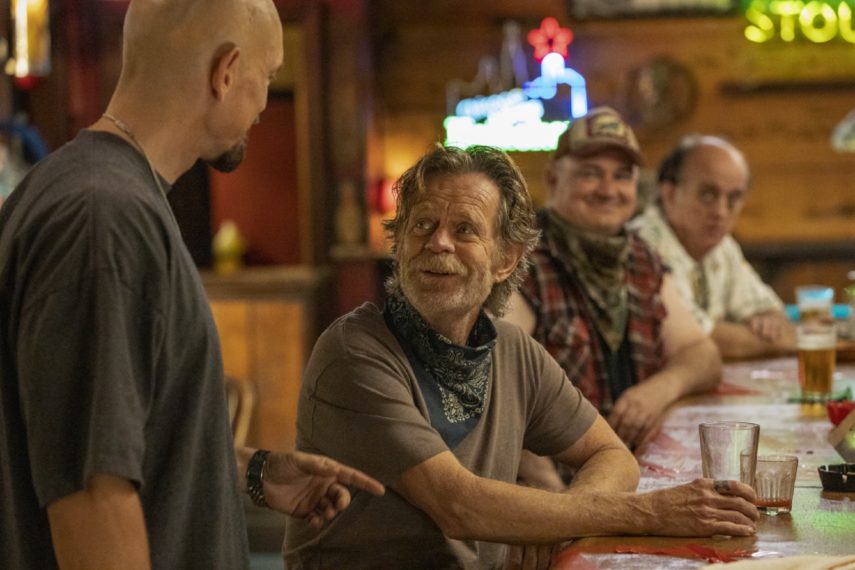 The episode opens with Frank discovering a box of poop on his stoop. A note on the outside of the container iss a sarcastic apology from new next-door neighbor Terry Milkovich (Dennis Cockrum), who acknowledges the mess he and his extended family are making. Deciding to confront Terry, Frank walks over to the house is deterred from wandering closer when he spots a dead dear in their yard.

Frank goes instead. to the Alibi, where he complains that ignoring the virus — referring to the Milkoviches — doesn’t do anything. So, he, along with Kev (Steve Howey), takes another crack at it, and goes back to their house. There they find one Milkovich gutting the deer carcass as another gets a swastika branded onto their arm. This thwarts Kev and Frank’s attempt to have a discussion and Frank begins plotting, noting that the virus has mutated beyond reason.

His plan? Murder Mrs. McCurdy (Bunny Levine), the woman whose house the Milkoviches are crashing in. Kev backs out while Frank devises a way to drive the wild family away from their home long enough for him to kill Mrs. McCurdy. He creates phony fliers for a “Unite the Right” rally at a local park that day, baiting Terry and tricking the neighbors to take leave from their new compound.

But Frank’s attempt to end Mrs. McCurdy doesn’t go as planned; he unplugs her life support machine, but she wakes up and fights back. Frank gives up, for now at least.

Lip & Tami Get Slaughtered by Housing As for Lip and Tami, despite them having settled in and improving Lip’s friend’s rental, they wake to a “for sale” sign on their lawn. Taking things in stride, Lip promises Tami that they can begin house hunting as soon as possible. 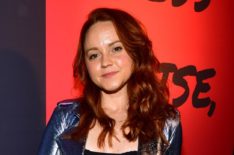 Later that day, while perusing listings in the window of a real estate office, Tami notices a place in their price range. That’s when the weird vibes start: Lip reacts strangely, and when they ask to be shown the house, the realtor who greets them is also a little off. The showing includes a rundown interior, odd noises, and a mysteriously locked door.

Lip tells the realtor he knows what’s wrong with the house, but wants to keep Tami in the dark so she can decide what she wants to do. What does Lip know? When the couple go to the Alibi, Kev spills the beans and tells Tami (and Lip) that the home is called the “Slaughter House” because a few years earlier the man of the house discovered his wife and children murdered inside. Not long after, the man hung himself outside. The South Side family is investing in new illegal ventures and welcoming some dangerous new neighbors in this first look.

But Tami’s not exactly deterred. She and Lip go back for another viewing and despite what seems like a possible haunting — including disembodied crying noises — the couple put their fears aside and explore the option of living at the Slaughter house. But then Lip gets fired from the garage because the new owners are implementing cutbacks. This leads to a fist fight that friend Brad (Scott Michael Campbell) is forced to break up. While the buddies sit and chat following the ordeal, Lip and Brad share a beer and discuss possible retaliation for the changes at their workplace. Will this work out well? We doubt it.

Carl Continues to Make a Mark on Chicago Back on the job, Carl (Ethan Cutkosky) continues to witness some rough tactics from his partner, officer Janes (Toks Olagundoye). During a shoplifting call, they chat with a suspect the store employee managed to detain. While Carl’s all about an easier approach, Janes threatens the suspect — who happens to be a kid — with a machete, causing the boy to pee himself.

Later, when Carl and Janes get a call to the same store just hours later, they find the boy has come back with a gun. Janes brings her machete for the chase, but accidentally falls on the weapon, injuring herself. Carl pursues the perp. Carl catches the boy in an alley and cuts a deal: He asks the boy to stay out of trouble and says in return he’ll protect him from Janes.

Debbie’s Suspicions Get the Best of Her Debbie (Emma Kenney) has a big day planned with Franny (Paris Rose Newton) to visit her daughter’s favorite wrestler and the park. She invites her girlfriend Sandy (Elise Eberle), but when she passes on it, Debbie’s curiosity gets the best of her and she puts Franny’s tracker in Sandy’s bag before she leaves for the day.

At the park and in line to meet Franny’s favorite wrestler, Debbie is distracted, focusing on her phone as she watches Sandy’s day unfold. Sandy visits restaurants and a strip club, and now anxious to follow her, she lies and says Franny is ill so they can cut the line in the meet-and-greet and then dash over to the club. Debbie is kicked out of the strip joint though and once she finally returns home, she questions Sandy.

Sandy gets mad about Debbie’s tactics and unwillingly reveals she has been driving for Postmates and bar tends at the strip club. She also tells Debbie she’s been living in her car when not at the Gallagher’s house. Before the pair can finish their argument, a man calls out to Sandy from outside the house and she reveals it’s her…husband! Continuing to transport pot, Ian (Cameron Monaghan) and Mickey (Noel Fisher) run into trouble when they get robbed on the road. Luckily, one of the robbers is Mickey’s cousin and they aren’t entirely cleaned out. Despite their ex-convict status, Ian decides to give up on playing it safe and allows Mickey to devise an alternative form of transportation for them so another robbery becomes less likely. The remedy involves boosting an ambulance, which is made easier with Ian’s past as an EMT.

In a moment of passion the men park the vehicle for a little afternoon delight, but the mood quickly dissipates when they discover a corpse in the back of it. After some quick thinking the men pull off under a bridge discard the body on an abandoned couch, and carry on with their day. While Frank is annoyed by the Milkoviches, Liam (Christian Isaiah) is straight-up horrified as the family next door torments him. He tries to tell the other Gallaghers, but they mostly brush him off. That is, until Liam discovers a dead deer head upstairs in his house and trails of blood all over the place. He beats it out of there and calls Carl from the streets, who tells him to go to the Alibi. There, Liam tries to pour himself a drink, but is stopped by Kev who asks Liam to explain what’s wrong.

Later, Carl picks up his brother and returns him to the house, presenting the youngest Gallagher sibling with a gun. Carl goes through all of the safety rules and tells Liam to use it against any threats if needed. That evening, when the noise in the streets from Frank’s made-up rally frighten Liam, he shoots up into the air before heading back inside for safety. The bullet rains down — and hit Terry, who is seriously injured. As for V (Shanola Hampton), she hits the political path, going door-to-door to encourage Black voters to support a new housing bill. Her list of targets don’t prove to be that helpful as many of the listed residents have been replaced by white residents. And of the Black people she does meet Black , V is discouraged by their views on voting. Will she find the motivation to carry on? Only time will tell.

« EPISODE 4
Nimby
EPISODE 6 »
Do Not Go Gentle Into That Good... Eh, Screw It
ADVERTISEMENT