Ask Matt: When Stars Depart, Why Not Recast? 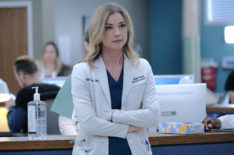 'The Resident' Shocker: Emily VanCamp Leaving Ahead of Season 5

A Nic by Any Other Name

Question: So another major female character has decided that she no longer wants to continue on a network series. I’m referring to Emily VanCamp leaving The Resident and its fans high and dry. This follows Megan Boone‘s leaving The Blacklist just a few months ago, and in both instances, this was sprung on the viewers like a surprise at the last minute–WHY????

By the way, we who follow all medical dramas note that the ensuing storyline that is sure to follow of a medical professional and single father taking care of his child has been already used on New Amsterdam for quite some time now, but that was used as a plotted cliffhanger about who survived a car crash, not a last-minute change due to an actress deciding not to continue in a role which to me is getting disgusting already. My point is: Why not bring in another person to assume the role instead? This has been done before, most famously by Dick Sargent going all the way back to the ’60s on Bewitched when he assumed the role of Darren previously played by Dick York. I think that should be given another try rather than this. — JV Matt Roush: Can’t really address the why. It’s their careers, lives change and so do priorities, and we just have to accept that some actors choose to move on during the course of a long-running series. (McDreamy, we still miss you.) But the subject of recasting is an interesting one, more common in sitcoms (Roseanne’s Becky as another case in point) and soap operas (Steven in the original Dynasty, and too many in daytime to mention), though not so much in prime-time “quality” dramas. Let’s see how they write Nic out of The Resident before making a final judgment, but for many, it would probably be even more jarring to see Matt Czuchry cozying up to another actress in the role.

Question: With the good news that Kate Walsh (Addison) is returning to Grey’s Anatomy, it conjured up fond memories of Private Practice, the spinoff that lasted six seasons. With so many spinoffs and reboots, do you think there is a chance ABC will consider working out a deal for that show to return? It had millions of fans during its run that I’m sure would be willing to watch more of it. Grey’s was ABC’s highest-rated scripted show last season (and likely will be again next season or close to it) plus spinoff Station 19 is also one of ABC’s stronger performers. I think ABC should milk the franchise even more with another spinoff. If not Private Practice (which had a built-in audience), perhaps another show. While it’s not “creative” for ABC to do this, I think it would have a better chance of success than a new standalone drama. — Fred How Will Nic Be Written Out of 'The Resident'? (POLL)

Matt Roush: I get your devotion to the Grey’s universe, but even the notion of this makes me despair for the future of network TV. They’ve all barely begun dusting off the shelves of vintage IP (“intellectual property,” my favorite oxymoron TV term) to try to reclaim the past for their shaky futures, so while I think it’s highly unlikely ABC would reboot an old spinoff, I’m also sure nothing’s off the table anymore. Especially if Grey’s eventually shuts its doors once Ellen Pompeo has had enough, ABC will want and/or need to continue the franchise somehow. I do agree with you on the point that resurrecting anything with a familiar title and premise has a better shot nowadays than trying something new. More’s the pity.

Comment: I am glad that Grey’s Anatomy is bringing back a character who is actually alive, and it will be fun to see Kate Walsh as Addison again. But the voice in the back of my head reminds me that Amelia (Caterina Scorsone) was in a serious committed relationship at the end of Private Practice, and they just threw all of that character development away once she migrated to Grey’s so that she could be paired with Owen. So even though I am excited for Addison to return, I hope they will be able to do it in a way that respects where they left her. Private Practice ended with her wedding to Benjamin Bratt‘s character of Jake Reilly, but it’s interesting to me that they haven’t confirmed if he will be coming to Seattle with her. I’ll be really irritated if they just had her divorce him offscreen so that she can get back into sexual shenanigans with whomever in Seattle again. — Jake Matt Roush: As far as I’m concerned, Private Practice never happened. (Wasn’t a fan.) But as usual, I’ll advise to wait and see and then judge. Her return does seem to have sparked some positive fan interest, whether she comes to Seattle attached or otherwise, so that’s a good thing.

Get a Clue, Jeopardy!

Question: Will they consider Sarah Whitcomb Foss to be a host on Jeopardy! or give her a shot? She has read clues for decades and always seems good. She’s very personable and people would recognize her. — Steve O

Matt Roush: I had to think for a minute before it clicked that Sarah is one of the “Clue Crew” (along with Jimmy McGuire), and yes, wouldn’t that be a nice gesture to a member of the Jeopardy! family. Beyond that, I’ve given up speculating on anything regarding the show’s ongoing search for a full-time host. I just hope they resolve this mess soon. The Future of NBC Sports

Comment: Your recent comment about NBCSN (as an outlet for Olympic programming) not being obscure seems to be in opposition to the fact that it has been announced that it would cease operation by the end of the year. I guess in 2022 and 2024 the Paralympics will be on the Olympic Channel mainly, but it is truly obscure. I am a sports fan, and barely knows it exists. — Jeff B

Matt Roush: Fair point, but that’s then and we were talking about this summer when NBCSN’s reach was still quite wide. The announcement about NBCSN shutting down noted that some of its programming will shift to USA Network, which is the opposite of obscure, so if NBC continues to leverage its most prominent cable partners in airing the Olympics — and the underappreciated Paralympics — many will still be able to see it. But so much will already have changed by the next Olympics, and certainly by 2024. It’s true NBC may need to put more marketing muscle behind the Olympic Channel, but this ignores the real story here: that the future of NBC Sports (and the sports divisions of other networks) lies in digital, and I found the NBC Sports app the most useful tool in navigating the Olympics this year. Which included, of course, Peacock, the streaming service that (like Paramount+ for CBS and Hulu for ABC) is where the business is ultimately heading. Question: Is the Bachelor franchise falling apart? It might seem so since the departure of Chris Harrison. The current Bachelor in Paradise segments are just plain lame: hosts with questionable commentary, along with a cast which can only be described as uninteresting and somewhat uneducated. Bartender Wells is the only saving grace! Where are the entertaining 20 and 30somethings to keep the pace fun and just the distraction we all need from the weather, virus, and war news? I am surely not the only member of Bachelor Nation who feels this way — Mary Anne

Matt Roush: You are most certainly not alone. Here’s this from Sondra B:

“Is it just me or is Bachelor in Paradise getting a bit raunchy this year? In the first episode, here comes Kenny walking around nude! The only thing the singles do all day is lay around and make out. The show used to be entertaining to watch, now it’s who can I go to the Boom-Boom with!” When, Where, and for How Long Was 'Bachelor in Paradise' Season 7 Filmed?

Matt Roush: Who knew people held this show to such high standards? I can’t really comment since I wouldn’t watch this if it were the last show on TV. But I must say I’m tickled by the notion that Bachelor in Paradise ever had a golden age.