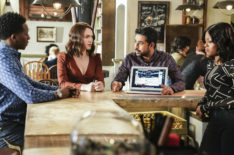 The CBS drama is ending after two seasons.

Question: I just read that CBS has canceled God Friended Me. I’m so sad! I realize that you probably receive a lot of mail from fans lamenting the demise of one of their favorite shows. Can you shed any light on why CBS decided to cancel it? Was it ratings? Is it a show not owned by CBS and so then the network may not have wanted to continue taking a chance on it? Rarely, some shows get saved by other platforms. What do you think the chances are here? The statement from CBS said that there was a conclusion that was hopefully satisfying. So, maybe that will be enough. Here’s hoping! — Beth

Matt Roush: These are the questions that try any TV fan’s soul when a favorite show is canceled — and this decision is a bit of a surprise, especially considering the precarious state of the TV industry during this period of coronavirus uncertainty. There is a school of thought that shows previously considered marginal — and to be honest, I hadn’t even put God Friended Me in this camp — might have a better shot at renewal because of the impact on pilot season and development. But I’m thinking this decision had more to do with its scheduling on Sunday night — which makes sense given its subject matter and tone, but it’s something of a blessing and a curse to air on one of the most-watched nights of the week. CBS and Warner Bros. Television promise 'a satisfying conclusion to Miles' journey in search of the God Account.'

Sandwiched between the immortal 60 Minutes and the NCIS spinoffs, Friended was something of an outlier, and according to the industry trades, its ratings had fallen 20 percent (33 percent in the coveted demo) from the first season, making it the network’s lowest-rated show on the night. Friended was a co-production of CBS TV Studios and Warner Bros., so I doubt the corporate angle was much of a factor. And it seems unlikely another platform would keep this going, although stranger things have happened. (It’s probably out of the price range for a feel-good network like Hallmark, but it would be a good fit there.)

Among other reactions in my mailbag:

From Amy S: “I’m so upset that CBS canceled this really great show, It added so much to their lineup and was smart and funny and perfect for Sunday nights (especially now). I used to DVR it because it always started late. It also added some much needed diversity to their lineup.”

Matt Roush: Which brings up the issue whether the sports-related delays (in Eastern and Central time zones) on CBS on so many Sundays negatively impact shows like this. The answer is no. CBS has a long history with this and understands how it affects shows — especially those in the 10/9c hour — but I’m betting CBS had hoped God Friended Me would perform in a comparable way of a previous Sunday-night hit, Touched by an Angel, and that didn’t happen.

From Brian: “I was dismayed to learn that CBS canceled God Friended Me. The show was entertaining and different than the seemingly endless supply of police/medical shows. Do you know if the show will have a real series finale, considering that the COVID-19 pandemic shut down production on many shows, or will it be a “that’s all they filmed, sorry” type of case?”

Matt Roush: By all accounts, the producers were given ample warning — more than the fan base, apparently — and the two-hour finale on April 26 is expected to work as a series wrap-up. Whether it will satisfy regular viewers is another matter.

A Tale of Two Series Finales

Question: I watched both the Modern Family and Schitt’s Creek series finales and retrospectives last week, and they were like night and day. While I’ve watched Modern Family throughout the years, I don’t think it was ever able to sustain the great levels of their first one or two seasons. Meanwhile, I think Schitt’s Creek is a near-perfect TV show, where its last season was every bit as fabulous as its first. With Modern Family, the characters aged over the series’ span, but in Schitt’s Creek, the characters evolved. The latter’s series finale had me laughing, crying, and laugh/crying throughout, as did its retrospective, which showed just how special this show was to so many people. Modern Family’s retrospective was more about the actors than about the show’s impact. Anyway, what did you think? — Sharon We're not just eager to see what's to come of Bishop and Torres' Tiva-like dynamic.

Matt Roush: It’s a fair assessment, although I seem to have enjoyed the Modern Family finale, and especially the retrospective, more than you. I’ve rarely seen a behind-the-scenes special for such a popular show from a major studio give such a candid look at the interaction of cast, producers and crew. But your interpretation is spot-on when it comes to comparing the arc of two very different comedies: one that started small and grew into a cult phenomenon, capturing the attention of Emmy voters as its final seasons grew richer, funnier and sweeter; and a mass-market sensation that exploded on the scene, dominating the Emmy scene for years, but which probably overstayed its welcome.

Question: We’ve been watching a lot of Netflix lately and have found some great shows. Our favorites are Ozark, Hell on Wheels and just finished watching Wanted, a great three seasons from Australia. I know that Ozark is coming back, and Hell on Wheels is finished (unfortunately), but didn’t hear anything about Wanted. We watched all three seasons in a week and want more. Any idea if it is coming back on Netflix? — Rick 'Modern Family' Cast Says Goodbye: What Did You Think of the Series Finale?

The stars paid tribute to the show, its fans, and each other with heartfelt messages and photos.

Matt Roush: As more and more households dive into the overwhelming depths of the streaming pool, especially in these days of self-isolation when there’s precious little else to do, it’s helpful to keep in mind where these shows are coming from. Ozark is what I consider top-tier Netflix, an original production for the service and one of its highest-profile. These are the shows Netflix promotes to critics and which occupies much of our (or at least my) attention. Hell on Wheels is a second-run acquisition, having aired for five seasons (2011-16) on AMC, and as is often the case these days, is the type of show that gets discovered by new viewers when arriving on Netflix (or Hulu or Amazon or others, depending on who gets the rights).

Trickiest of all from my point of view are the international acquisitions, which tend to fly under my radar because with rare exceptions, they’re not promoted with the same energy as Netflix’s originals. Wanted, which aired only three short seasons (six episodes each) from 2016 to fall 2018, falls into that category. I haven’t seen it, but it sounds addictive. At present, there hasn’t been word on a fourth season, but that’s going to have to be decided by Australia’s Seven Network, and I’m afraid that falls a bit out of my coverage zone. Getting in the Dirt with HGTV

Question: I almost always agree with your analyses of shows and enjoy reading them. My question I am an avid gardener. When HGTV first started, they had several gardening show: The Gardener Guy, Victory Garden and many others. Now there are none, it seems. Why is that? They forgot the G in their name. I can’t believe there is no audience for garden shows and I miss them a lot. Is there any hope that will change? In today’s atmosphere, I can imagine they would be particularly welcome, especially in light of renewed interest in being at home and starting a garden. Linda, Barnet, VT

Matt Roush: I can’t think of a more perfect time to jump-start this type of programming, especially with so many people isolated at home, and presenting a show from a garden sounds even safer than doing it from the makeshift living-room studios we now see so often. To your bigger point, the most obvious reason HGTV may have gravitated away from the gardening genre to a flurry of home renovation, design, flipping and buying shows has to do with eyeballs. It’s what the audience prefers to watch, in large enough numbers to create its own cottage industry. Why else would Travel Channel, for instance, have evolved into an almost 24/7 paranormal network? 'Schitt's Creek' Goes Out With a Bang, Finale Pulls in Highest Ratings for Series

A lot of people tuned in to see David and Patrick say 'I do' in the comedy's final episode.

Question: Do you know why, after Spectrum Originals announced that the first season of Temple would premiere on March 9 as an original series, it still hasn’t aired? I have tried to get info on an updated release through Spectrum but no one seems to know. Help! — Melissa, Buena Park, CA

Matt Roush: I don’t know the reason for the delay, but I’m assured this crime drama starring Mark Strong, as a surgeon who opens an illegal medical clinic beneath London’s subways, is still in the pipeline for future airing on demand for Spectrum customers. No new airdate has been announced, but you might have to wait until fall.

Question: Our DVR only allows me to record one show while watching another. Several shows including Swamp People run over a minute or two, making it hard to record other shows. I feel like they’re trying to hold us prisoner and it’s extremely annoying. Is there any way to let them know they might lose viewers because of this? — Linda M The creators and stars thanked fans and shared behind-the-scene photos.

Matt Roush: I’m sorry to say they really don’t care. (This falls under the FAQ category of recurring complaints in my mailbag.) This strategy has been in play for years, to extend a popular show into the first minute of another time period in hopes of keeping people from tuning elsewhere. It often backfires and only creates bad feelings from viewers like you. Of course in some cases, especially on cable, producers are given freedom (mostly in scripted series) to let their episodes run longer than the usual hour or half-hour for creative reasons. But in an example like this, it’s shoddy business as usual. (My advice has generally been to manually program the later show to start a minute later, because it’s usually less risky to miss the first minute of one program rather than the very end of another.)