Ask Matt: Why Is CBS Shutting the Door on ‘NCIS: New Orleans’?

Question: How come CBS is canceling NCIS: New Orleans? I really like that show. If they wanted to cancel one of those NCIS shows it should have been NCIS: Los Angeles. That show has gone downhill since Hetty is only on it occasionally. The best part is LL Cool J. — Sandra

Matt Roush: As you can imagine, the shockwaves from CBS turning the lights off of any of its NCIS shows are intense. (Same thing happened when CBS began winnowing its schedule of CSI shows back when that was the dominant crime-drama franchise.) There’s no way to address a cancellation that will satisfy a show’s fans, and adding to the confusion this time is the fact that New Orleans is the youngest (seven seasons) within the franchise — the mothership is in its 18th year and Los Angeles its 12th. While it may seem premature to NOLA‘s fans, this is pretty much in keeping with CBS’s history of refreshing its schedule and retiring many of its procedurals, even those with solid ratings, after roughly seven seasons (i.e., Cold Case, Elementary, Without a Trace), a point at which a show can become much more expensive to produce. NOLA was never quite as self-sustaining ratings-wise as its predecessors, and I’ve read that it hasn’t been as successful or lucrative in the syndication market, which along with the high costs of location filming could be other contributing factors. Another fan, Ouida, wrote in to point out another twist: the reports about the producers developing a Hawaii-based NCIS spinoff, which couldn’t be more CBS if it tried. She points out: “Why create [a spinoff] in Hawaii, which reminds me of Hawaii Five-0. McGarrett was Navy, so why not just combine this with some characters from Five-0 and keep NOLA?”

Matt again: I doubt McGarrett would reappear under any circumstance. Alex O’Loughlin had been ready to hang it up for quite a while. But as they’ve done on their other Hawaii-based shows, I wouldn’t be surprised to see Five-0 characters, as well as Magnum folks, show up if the Hawaii NCIS comes to pass. Junior Does the Time Warp

Question: On black-ish this week, we see Junior deciding to take his girlfriend, Olivia, on a vacation instead of his mother, which brings up the whole thing about how weirdly intense the relationship between Bow and Junior is. Whereas on this week’s episode of the spinoff grown-ish on Freeform, the plot involves Junior crossing over to that show because “I came to reclaim my woman,” Zoey’s friend, Skye. He had been flirting with Sky a couple of seasons ago, before Olivia was introduced on the mothership. I know the shows are on different networks, but they are still meant to exist in the same world and clearly have at least some crossover viewership. I don’t expect them to intersect nearly as much as something like Grey’s Anatomy and Station 19 do because they serve different needs for different networks. But they should at least make some attempt not to blatantly contradict events occurring on the other show. This just seems like sloppy management, making me wonder how does this even happen? — Jake

Matt Roush: This weird scheduling of episodes may have something to do with grown-ish taking such a long hiatus during the pandemic, not airing new episodes between March of 2020 and January of this year. Even so, black-ish has by now established Olivia (Katlyn Nichol) as a main character in the world of the Johnsons, so maybe grown-ish could have shelved this episode because the timeline disruption is so jarring. Question: I’m inquiring about the third season of FX’s Mayans M.C. I love, love, love the show and am hoping it’s coming back. Please tell me and many of my friends what we want to hear. — Lise

Matt Roush: For a change, some good news. Your long wait is almost over. The first two seasons premiered in September, which obviously wasn’t possible in 2020 during the year of COVID, but mark your calendar for the third season to begin March 16. Question: What happened to the CBS show, Evil? I read at one point it had been renewed but then nothing came of it? — Donna S

Matt Roush: Be patient. It’s coming, just can’t say when. Production on the second season didn’t begin until late 2020, so it’s hard to know when episodes will be ready. But I know I am, and many others are. This could end up being a chilling summer treat, and I’d be up for that. Question: A Million Little Things has been off for about three months and why are these show doing this? It is so hard to remember what’s going on. This is not the only show doing this. Years back they never did this. — Unsigned

Matt Roush: All together now: Years back, there wasn’t a pandemic. I know it’s a tiresome refrain, but this crisis has affected everyone in the business, and there were some who argued that this and other shows might have been better off not even airing their handful of episodes in late 2020. I imagine we’ll get a healthy recap when ABC’s Thursday shows return in two weeks, but this disruption was as inevitable as it is frustrating. Question: I enjoy the new Chain Reaction episodes airing at 5 pm/4c on GSN channel. I also really enjoyed watching the old version every Saturday and Sunday morning at 9 a.m. Of course it has been removed and replaced with reruns of Deal or No Deal which I don’t like at all. Is there any chance of the old show returning on the weekends?

Also, I like Ken Jennings better than Mike Richards on Jeopardy! Ken Jennings was more reserved and did Alex Trebek credit. I am not interested in the upcoming guest hosts for fear of turning my favorite show into a joke. — Marianne Matt Roush: For now, it looks like GSN wants to focus on the Chain Reaction reboot and let the endlessly repeated early episodes rest for a while. Schedules on channels like this are constantly in flux, so maybe if you reach out to GSN directly, they’ll hear you. (They may also read this, so that’s step 1.)

Regarding Jeopardy!: I’m going easy on just about anyone who’s filling in during this interim period. I was pleasantly surprised by Ken Jennings and have said repeatedly in this space that if the show sticks with him in the long run and vice versa, I’d be at peace with that. As executive producer Mike Richards explained at the beginning of his first week and in this video on the show’s website, he’s filling in by default because of the logistics and timing from when they lost access to Ken (because of his commitment to ABC’s The Chase) and when they could start booking the celebrity guest hosts. And while I get your concern that the parade of new faces could feel a bit like a circus, as long as they keep the game and the contestants front and center, Jeopardy! will be fine — and more importantly, will keep going with new episodes until a decision is made presumably for next season. So far I’m enjoying it, while still missing Alex. 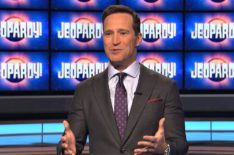 How Did 'Jeopardy!' EP Mike Richards Do as Guest Host? Fans Weigh In