FX is gearing up for a strong spring season with several premiere dates lines up in the coming months at the network.

Kicking off the month of March, FXX’s Cake returns for its weekly showcase of short-form comedy beginning Thursday, March 11 (10/9c). Each of the season’s nine episodes will be anchored by Nine Films About Technology from Peter Huang, dark comedic live-action stories about human relationships in the age of smart phones and social media. Both the weekly showcase and individual programs will stream on FX on Hulu. 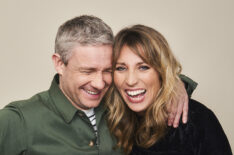 The pair play frazzled parents in the new comedy.

Less than a week later, the third season of FX’s Sons of Anarchy spinoff, Mayans M.C., will zip onto screens after more than a year off air. The 10-episode third season begins Tuesday, March 16 at 10/9c on FX. A few days later, the comedy Breeders, starring Martin Freeman and Daisy Haggard, returns for its sophomore season on Monday, March 22 (10/9c).

And while returns may be enough to get fans going, the excitement extends beyond familiar titles as FX introduces a new documentary feature spotlighting the women of stand-up comedy. Hysterical debuts Friday, April 2 (9/8c) and is an honest and hilarious backstage pass into the lives of stand-up comedy’s most boundary-breaking women. Stay tuned and mark your calendars for FX’s packed slate this spring.