Question: CBS has announced that production has started on a number of shows, like NCIS, Magnum P.I., etc. One show that I fell in love with last year seems to be MIA: the CBS supernatural drama Evil. I know it was renewed last year, but I’m starting to worry that it might have been canceled do to COVID-19. Like Netflix canceling The Society. Halloween is coming up and I’m jonesing for some devilish good times. Please tell me you heard some good news. — Justin

Matt Roush: If you hoped to hear that Evil would be back by Halloween, I’m sorry to disappoint you. (I’m disappointed as well.) But maybe it will left your spirits (so to speak) to learn that Evil has not been canceled and should be returning to production relatively soon. The TV Insider editors regularly update a list of shows that have resumed production, as news becomes available. The last report I saw in the industry trades regarding Evil was that a green-light from the network and studio was imminent, so I’m hoping we’ll eventually start seeing episodes (maybe by early 2021, if not earlier?) if all goes well. Evil was one of my favorite new shows from last season, and if you need a refresher, the first season just started streaming on Netflix as well as its regular streaming home on CBS All Access. (The first season of The Unicorn, my favorite new network comedy from last year, is also part of the Netflix licensing deal.) Will Full Seasons Be Less Full This Year?

Question: When shows like The Rookie and Zoey’s Extraordinary Playlist finally get to start their 2020-21 seasons on the air (apparently sometime in 2021), do you anticipate they’ll have a full season’s complement of episodes, or are producers of non-reality, non-game shows expecting — if they’re lucky — they’ll be able to have 12 or 13 this year? – Paul

Matt Roush: Or, depending on the show and the circumstances, maybe even fewer. I’m not up to speed on the episode count for every series this bizarre season, but it only makes sense that most shows delayed until what would normally be the midseason are unlikely to produce a full slate of 20 or more episodes this year, especially considering the challenges and protocols and possibilities for temporary shutdowns (as occurred recently with Chicago Med, for instance). With Zoey, it was reported that it was renewed for a second season of 13 episodes — the first comprised 12 — and that sounds about right, although even that’s ambitious for such an elaborately produced show. 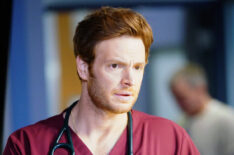 A Star Is Born?

Question: Is it just me, or should Zurie Hester, the 7-year-old granddaughter of Terry Bradshaw from The Bradshaw Bunch, get her own TV show? She’s fantastic! — Don V, Kissimmee, FL

Matt Roush: I’ll have to take your word for it, because I can’t bring myself to watch this sort of show where celebrity families welcome cameras in to watch them act out, crack each other up, or whatever constitutes their televised “reality.” That said, no matter how telegenic a 7-year-old is, I can’t support encouraging someone to become more famous just because of proximity to fame, unless there’s a talent or an ambition displayed beyond playing to the camera. That path lies to a toxic byproduct of our celebrity culture I think of as Kardashian-ism. Giving Movies Made for TV Respect

Question: I watched Showtime’s The Comey Rule the other night and loved the film, and then I read reviews. After all these years, there still seems to be a stigma about a film made for television. HBO and Showtime have been producing quality movies for decades now, and now Netflix produces great films. Can’t a film just be a film now, no matter where they come from? — Dail W

Matt Roush: I don’t know what reviews you read, but anyone who condescends to TV as a lesser medium than movies anymore — especially in the limited-series format as seen in the premium and streaming sectors (and I’d add FX to that list) — has a screw loose or is just being lazy. I mostly enjoyed The Comey Rule, but it’s open to criticism on a number of fronts, though not because it was made for TV. Question: Is the BBC channel WTTW going to have another season of Beecham House and World on Fire for 2021? — Diane C

Matt Roush: To be precise, WTTW is not a BBC channel. It’s Chicago’s leading PBS station, which like most in the system broadcasts British dramas (often as part of the Masterpiece franchise) that originated with the BBC — or, in the case of Beecham House, ITV. Sadly, Beecham was not renewed for a second season, but World on Fire will return, though given what an expansive production that WWII drama is, it’s unclear just when it will be filmed or when it will be seen.

Question: I feel compelled to voice my displeasure at the ending of one of my favorite productions: Beecham House on Masterpiece. I have been a faithful watcher of this anthology since the days of The Forsyte Saga and have enjoyed many of their productions. I taped all of the beautiful episodes of Beecham House and was transported to another world and time. The acting was superb and I looked forward to the end of this drama. Sadly, to have it end with everyone being killed in the household and the baby stolen was very upsetting. I did read that they were hoping to continue the story in another production but it was not picked up. Don’t the people at Masterpiece realize how unhappy this made their faithful viewers to see this beautiful production end this way? I think it tarnishes their reputation. Someone should have had better foresight! — Janet B, Cranbury, NJ

Matt Roush: This has come up before, and as I’ve previously noted, when I reviewed Beecham House, I warned viewers several times without spoiling as best I could, that if they stopped watching a few minutes before the end, they could pretend the series had a happy ending. Only in that misbegotten final scene, when Beecham and his soulmate returned to the house to that scene of horror, did we experience that awful sensation familiar to anyone who’s had a favorite show prematurely canceled: The Unresolved Cliffhanger. (This was also the case, though not quite as violent, with another one-season-and-out ITV import, Jane Austen’s Sanditon, earlier this year.) PBS and Masterpiece don’t control the fate of these series, and I’m not sure if they would have had the ability or rights to lop off that final scene (I doubt it), but it does leave a terrible aftertaste to what had been an enjoyably escapist period drama, one of Masterpiece‘s specialties. Matt Roush: I liked it, too, and apparently a second batch of episodes has been confirmed to be filmed in Amsterdam, but given the global pandemic, like so much else it’s unknown when we’ll see it again.

Question: Will the show What We Do in the Shadows ever return? I, for one, thought it was very original, up-to-date and funny. — Bill

Matt Roush: You’re not alone. This hilarious vampire comedy made a splash at this year’s Emmys. It didn’t win anything in the year of Schitt’s Creek, but to receive three (!) writing nominations and to be up for best comedy series in such a competitive year, there’s no way FX wouldn’t bring it back. Just can’t say when. (I recommend a binge-rewatch during Halloween season.) Beecham House where to stream

The Comey Rule where to stream