Worth Watching: More Chaos Below 'Decks,' Stand-Up Festival on HBO Max, Thaw Out With 'Secrets in the Ice'

Star Trek: Lower Decks (streaming on CBS All Access): The animated sci-fi comedy finds its sweet spot satirizing Starfleet protocols in the best episode to date, when Capt. Freeman (Dawnn Lewis) loses her cool upon learning her crew has built "buffer time" into their menial tasks. (As one explains, "You never admit the actual time it takes to finish a job. If you did, your days would be packed.") As punishment, the captain overcompensates, running everyone so ragged they're not up to the challenge when a diplomatic mission goes dangerously sideways. Even then, the captain won't let up: "It's called multi-tasking, people. They do it on the Enterprise all the time!" How You Can Watch the Emmy-Nominated 'Star Trek: Short Treks' for Free

The CBS All Access was series was nominated for Outstanding Short Form Comedy or Drama Series. The truTV comedy returns for Season 2 on Thursday, March 26. Ten people will enter the Vancouver Island wilderness solo, each carrying only what they can fit in a small backpack.

In a busy day for the streamer, which apparently hopes to mimic Netflix in its overkill, HBO Max also unleashes 20 episodes of the prehistoric animated comedy The Fungies!; and 15 episodes of the British reality show Singletown, in which five couples "take a break" (so very Ross and Rachel) and move into new flats, where they're surprised to find their exes are their new neighbors. They all keep tabs on each other's new romantic hookups and regularly reassess their relationships in a "Love Locket" ceremony. 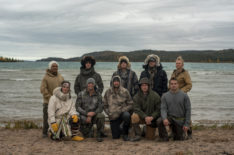 Secrets in the Ice (10/9c, Science Channel): Haven't I seen this science-fiction movie before? A new documentary series seeks to chill with long-buried mysteries, as experts and scientists look within glaciers, subterranean chambers, mountaintops and other icy tombs to expose relics from the past. Examples: a glacier in southern Greenland that preserves an ancient stone (possibly Viking?) hut, and a tattooed mummy discovered in Siberia. Plus, check out the official key art of the new animated series.

Upright (streaming on Sundance Now): This heartfelt and harrowing Australian road-trip comedy is one of my favorite finds all summer. With one more week to go of back-to-back episodes, time to check in on not-so-lucky Lucky (series co-creator Tim Minchin), a musician traveling across the desert country with plucky teenage runaway Meg (Milly Alcock) and an upright piano in tow. After a bitter fight, Meg leaves Lucky stranded, with more chaos ensuing. A snakebite, a stolen horse and an ill-fated camel all play into the latest leg of this bittersweet journey, which picks up urgency when Lucky gets a disturbing call from the family he's so desperate to get back to.

Also streaming on Sundance Now: the final episode of the fifth season of acclaimed French spy drama The Bureau, and the first-season finale of Australian psychological thriller The Secrets She Keeps.

Inside Thursday TV: In what appears to be a three-hour season finale, History's Alone (8/7c) follows its final three survivalists through more frigid struggles on their way to Day 100 and a $1 million prize… The Democratic National Convention concludes (check local listings for times) with an address from presidential nominee Joe Biden, scheduled to be preceded during the night by several of his prominent rivals for the nomination during the primaries: New Jersey Sen. Cory Booker, former South Bend mayor Pete Buttigieg and entrepreneur Andrew Yang… The Netflix documentary John Was Trying to Contact Aliens profiles John Shepherd, who spent 30 years trying to make contact with extraterrestrials by sending music into space… In the conclusion of a two-part episode of truTV's wacky Tacoma FD (10/9c) set at the Firefighter's Ball, Terry (Kevin Heffernan) and Eddie (Steve Lemme) have it out with each other while trapped in an elevator.