Words you’ve probably never heard spoken on a Star Trek series before: “The bridge is not cool.” Isn’t there a prime directive against irreverence in this sci-fi universe?

If so, Star Trek: Lower Decks proudly flaunts the rules, sending up the clichés the franchise invented and its followers revere. (Sample: “All Klingon names sound the same, like they all have an apostrophe for some reason.”) Trek has gone the cartoon route before (the earnest 1973–74 Star Trek: The Animated Series), but rarely has the final frontier been mined so exhaustively for laughs.

Set aboard Starfleet’s less-than-mythic U.S.S. Cerritos, which is more accustomed to making second (not first) contact with strange new worlds, the lively, mirthful and colorful Lower Decks focuses on the characters you rarely notice while the captains are busy saving the day. These are the grunts—often thought of as “redshirts,” though that sartorial distinction isn’t as exclusive as it used to be—who are often the first to succumb to calamities on board or during complications on away missions. Ensigns Boimler and Mariner have very different approaches to how they spend their free time.

“We’re not really elite,” explains Ensign Beckett Mariner (given delightfully insouciant voice by Tawny Newsome). “We’re more like the cool, scrappy underdogs of the ship.” The reason she’s so unimpressed by the authority she regularly defies becomes clear early on, but that doesn’t make her less of a blast.

Her jaded attitude and natural savvy are thorns in the conscience of her uptight buddy, Ensign Brad Boimler (The Boys‘ Jack Quaid), a by-the-books stooge who dreams of glory while nerding out on the ship’s warp core. He’s the sort of patsy who lets it slip to stern Capt. Carol Freeman (Dawnn Lewis) that their crew, which includes wide-eyed new transfer Tendi (Noël Wells) and cybernetically enhanced engineer Rutherford (Eugene Cordero), builds “buffer time” into their jobs. When the captain overreacts, refusing to let them shirk their menial tasks even to repel an alien invasion— “It’s called multitasking, people. They do it on the Enterprise all the time!”—Lower Decks finds its bliss in the realm of high comedy. Series creator Mike McMahan (Rick and Morty, Hulu’s Solar Opposites) clearly loves this world he’s satirizing with such spot-on and in-joke detail. Even when he puts Mariner in peril, after a peace mission goes predictably sideways on a hostile planet, she doesn’t bat an eye. Instead, she riffs: “Ah, circled by spears. This is a classic. What am I, Kirk? Is this the 2260s? All right!”

It’s all more homage than parody, so it feels more like a wink than a slap when Mariner taunts Captain Freeman with the “Live long and prosper” sign, and the boss barks, “Don’t you give me that sarcastic Vulcan salute!” Even Mr. Spock might be amused. 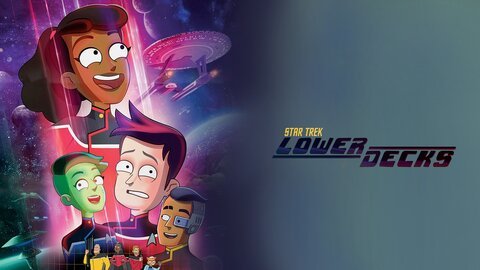