Sunday Night at the Movies (Sunday, 8/7c, CBS): During the pandemic, many of us are enjoying movie nights at home since there’s nowhere else to go. Reviving a long-dormant tradition of airing theatrical blockbusters on Sundays, CBS raids Paramount’s vaults with a lineup of the studio’s most irresistible titles. Raiders of the Lost Ark, which introduced Harrison Ford as Indiana Jones in 1981, leads the way, with 1994’s best-picture Oscar winner Forrest Gump, Mission: Impossible, 1997’s Oscar and box-office champ Titanic and Indiana Jones and the Last Crusade following in successive weeks. Watching movies on TV used to feel like an event. Can it happen again? Zoey’s Extraordinary Playlist (Sunday, 9/8c, NBC): It’s never a good sign when your reflection starts singing to you — and when Zoey (Jane Levy) finds herself belting “Bad Moon Rising,” she spends much of a tremendously affecting season finale — please don’t let it be the last — expecting calamity around every corner. Fans won’t be surprised to learn the source of her misfortune, and while there are some whimsical highs throughout the final hour — Alex Newell as Mo once again stops the show — the story takes a turn likely to have you reaching for the tissues you put away when This Is Us wrapped. Once again, Zoey hits all the right notes, emotional and otherwise. The parallels have to be deliberate. Right?

Westworld (Sunday, 9/8c, HBO): Not made available for preview, the plus-sized third-season finale — HBO has already renewed the sci-fi mind-bender for a fourth — goes into existential battle, with newly self-aware front-line warrior Caleb (Aaron Paul) musing in the teaser, “What’s about to happen was always going to happen.” With hosts at each other’s animatronic throats and a blood-spattered William (Ed Harris) pledging to save the world, expect the stakes to be apocalyptic. Billions (Sunday, 9/8c, Showtime): The cutthroat financial melodrama returns for a fifth season, with Axe (Damian Lewis) facing new challenges to his supremacy from a social-impact mogul (House of Cards‘ Corey Stoll), while welcoming Taylor (Asia Kate Dillon) back to the firm. Arch-frenemy Chuck (Paul Giamatti) is on the outs, licking his wounds as a lecturer at Yale, where he’ll meet a sensual professor (The Good Wife‘s Julianna Margulies), who could at the very least lift his spirits. 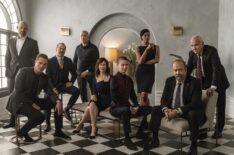 Nickelodeon’s Kids’ Choice Awards 2020: Celebrate Together (Saturday, 8/7c, Nickelodeon): Victoria Justice (Victorious) hosts the annual celebration of kids’ culture, produced virtually as so many events are these days. Among those scheduled to appear from home and remote locations: cast members of The Avengers: Endgame, plus Dwayne Johnson, Ariana Grande, Kristen Bell, Ellen DeGeneres, Millie Bobby Brown, BTS, Shawn Mendes and many more. NBA all-star LeBron James receives the 2020 Generation Change Award for his advocacy of education, and Nickelodeon furthers its social outreach with a $1 million donation to No Kid Hungry, a campaign to end childhood hunger in America. And yes, somehow there will be slime. (Parental warning: Do not try this at home.) Nickelodeon is also raising awareness with a $1 million donation to No Kid Hungry. Sci-Fi rebranded itself as Syfy 10 years ago, so we're looking back at the most memorable series before the change.

Good Witch (Sunday, 9/8c, Hallmark Channel): Most recently seen reprising her JAG role as Mac on NCIS: Los Angeles, Catherine Bell returns to her more nurturing role as the benign title character of Cassie Nightingale for a sixth season of the popular feel-good drama. With her and husband Sam’s (James Denton) offspring now away, the focus is more on the grown-up intrigues of Middleton — including the curse bedeviling Cassie’s cousin Abigail (Sarah Power) and boyfriend Donovan (Marc Bendavid), which now takes the form of “misfortune” cookies. World on Fire (Sunday, 9/8c, PBS, check local listings at pbs.org): In one of the more epic moments of the World War II drama’s first season on Masterpiece, Harry (Jonah Hauer-King) finally rises to the heroic occasion when his unit arrives at the evacuation of Dunkirk, where his path crosses that of overwhelmed field doctor Webster (Brian J. Smith). On the home front, Lois (Julia Brown) entertains the troops at an airbase, where she charms the stripes off an RAF fighter pilot, Vernon Hunter (Doctor Who and Legends of Tomorrow‘s Arthur Darvill). 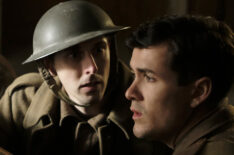 Killing Eve (Sunday, 9/8c, BBC America): A pivotal episode of the kinky spy thriller finds Eve (Sandra Oh) not much in the mood to celebrate her birthday, considering a trip to Poland to make peace with estranged husband Niko (Owen McDonnell). Villanelle’s (Jodie Comer) return to London has obviously rattled her, but the assassin’s quirky and obsessive behavior has also raised a red flag for her mentor and current handler Dasha (Harriet Walter), who’s not above taking drastic action to refocus her prized asset.

Run (Sunday, 10:47/9:47c, HBO): The edgy, suspenseful rom-com heightens the tension when Fiona (Archie Panjabi) schemes to put a wedge between Billy (Domhnall Gleeson) and Ruby (Merritt Wever), who’s already distracted by news from the family she left behind. What began as a lark of a road trip now becomes more of a chase thriller. Inside Weekend TV: Oscar-winning director, animator and cinema enthusiast Brad Bird joins a new season of Turner Classic Movies’ The Essentials (Saturday, 8/7c) as host with Ben Mankiewicz. His first choice is one of the all-time greats: 1952’s Singin’ in the Rain… For nostalgia lovers, MeTV declares May “The Month of Mayberry,” kicking off the celebration with a mini-marathon (starting Sunday at 5 pm/4c) of the first episodes of The Andy Griffith Show, Gomer Pyle, U.S.M.C. and Mayberry R.F.D.… ABC’s American Idol (Sunday, 8/7c, ABC) reveals its Top 10, reinforcing the “home” theme with past winner Phillip Phillips returning (remotely) to perform an acoustic version of his hit song, “Home.”… The preachers’ feud continues on Fox’s The Simpsons, when Rev. Lovejoy travels to Michigan to get dirt on his rival (guest voice Pete Holmes), and the Springfield congregants must decide whether to forgive or condemn their new faith leader… While we self-isolate indoors, Weather Channel devotes two hours to extreme weather outdoors, with new series World’s Deadliest Weather (Sunday, 8/7c) and Deadline to Disaster (Sunday, 9/8c) incorporating user-generated footage of devastating storms and floods from around the world… Series star Melissa Benoist directs her first episode of The CW’s Supergirl (Sunday, 9/8c), which is heavy on Lex Luthor (Jon Cryer) action and backstory… ESPN’s hit broadcast of the docuseries The Last Dance (Sunday, 9/8c) continues with two episodes focusing on Chicago Bulls’ star player Michael Jordan’s ascent to the top tier of world celebrity in the 1990s, with all of the accolades and scrutiny that entails.