Sci-Fi picked up this comedy series — in which a motley crew of humans and robots pillory real-life B movies — for three more seasons starting in 1997 after it lost its Comedy Central home. Without Sci-Fi, viewers might never have seen The She Creature, The Pumaman, and Squirm.
Sci Fi Channel/Getty Images

Ranked as one of Entertainment Weekly's "25 Best Cult TV Shows from the Past 25 Years," this show featured a ragtag team of humans and aliens eluding the authoritarian Peacekeepers, with the Jim Henson Company providing prosthetics and puppets.
Syfy/NBCU Photo Bank

Starting in 2002, Sci-Fi aired the last five seasons of this mythology-heavy, Saturn and Gemini Award-winning series, which centered on an elite Air Force unit thwarting alien threats throughout the universe through the use of the Stargate portals.
Frank Ockenfels/SCI FI Channel/NBCUPB

Perhaps the most critically adored show on this list, BSG depicts a war between humans and robots called Cylons, some of whom look just like humans and some of whom don't even realize they're not human. The impressive cast includes Edward James Olmos, Mary McDonnell, Katee Sackhoff, and Grace Park.
Andrei Jackamets/Syfy/NBCU Photo Bank

Never mind the accusations of pseudoscience that have plagued this show: It's still one of the biggest and most successful entries in the paranormal reality TV genre. The show tracks Jason Hawes and Grant Wilson as they use electronic gizmos to investigate spooky phenomena.
F. Scott Schafer/Syfy/NBCU Photo Bank

An offshoot of the aforementioned Stargate SG-1, a team of explorers discover that the mythical city of Atlantis is actually a starship that the Ancients took from Earth to the planet Lantea. And as a bonus: Future Game of Thrones star Jason Momoa joined the mix in Season 2.
Carole Segal/Syfy/NBCU Photo Bank

In one of its last moves before the Syfy rebranding, Sci-Fi picked up the broadcast rights to a webseries and turned it into this TV series, which stars Stargate SG-1 and Stargate Atlantis alum Amanda Tapping as a 157-year-old teratologist who leads a team that provides refuge for the cryptids, monsters, and legendary creatures.

Sci-Fi rebranded itself as Syfy 10 years ago this month, much to the consternation of many fans and critics.

Ad Age even wondered if we should "start a Syfy death watch" on account of all the negative hype around the name change. But both the name and the channel soldiered on, debuting such shows as Lost Girls, 12 Monkeys, and The Expanse. 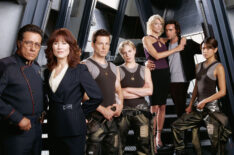 Whether you loved or hated the final episodes, there are moments we can all appreciate even 10 years after

Now, though, we're honoring our favorite shows from that long-lost Sci-Fi era in this totally unscientific, totally subjective pantheon in the gallery above. Don't frakking @ us.