Villanelle loses control in Sunday’s episode as she and Konstantin delve into freelancing as assassin and handler. He continues to try to get her to leave her obsession with Eve in the past and stops her before she kills a woman for cutting the line in the bathroom.

TV Insider spoke with Bodnia about Konstantin and Villanelle’s relationship, the fun dynamics we’ve seen in Season 2 with his character and Eve and Carolyn (Fiona Shaw), and the fact that his character has no other career options.

Realistically, how long can Villanelle and Konstantin freelance like they are? She’s not happy with the work, and there’s only so much he can do to control her.

Kim Bodnia: Exactly. That’s exactly what this is about. It’s always difficult with these kind of people. Konstantin and Villanelle have a good connection, but you’re right, you can never be sure what her next move is. So, are they going to continue to do this freelancing for the next few episodes?

I don’t want to [spill] the surprises, because that’s actually what we love about Killing Eve. You never really know what’s happening, but, of course, because I’m really enjoying playing Konstantin and I think we have a fantastic relationship, me and Jodie, I hope we continue.

You touched on Konstantin and Villanelle’s dynamic. It’s so fun and twisted, and I especially love that she told him she tried to kill him like he taught her in Episode 3.

That was funny, yeah. That reunion was just perfect.

Konstantin was very surprised when he saw her again, when she run through him with a knife. Even if her face was showing — in her world and my world — some kind of happiness, but you never know. When she’s running through you with a knife like that, you can never be sure.

I have to be sure that I’m not trusting her all the time, then I can maybe lose my life. I was happy that she didn’t stab me.

But then we’re seeing that Villanelle is being sloppy, like she is in the club, attacking the woman in the bathroom, and Konstantin has to intervene. How does he view this behavior compared to what he’s seen of her in the past?

It’s problematic. She’s behaving like a teenager. That’s the problem. She’s not really having control of her senses and feelings, and now with all the medical stuff she’s taking, that’s a risk. That’s a big risk. Actually when I read about Konstantin the first time, that’s what he loves about Villanelle, that she is so uncontrollable and she’s so good at the same time at doing what she’s good at.

It’s important to use the humor and remember that they’re having a good time. That’s why I’m trying in the car to have this nice time with her.

She’s out of control, and I’m definitely not happy about that.

We see Konstantin taunt Villanelle with Eve’s focus on the new assassin. But what does Villanelle think of this new killer and her methods?

It’s always a good question what she is thinking. There’s no doubt that she’s jealous. That’s exactly what we’re trying to say to her: “Don’t be jealous. Don’t have these senses and feelings.” We really don’t know if she is jealous. Does she really have these kinds of feelings?

I don’t know. But Emerald [Fennell], the writer, is actually playing with that in her scripts, and I’m enjoying that. I can see from her reaction, what she’s doing behind my back that she’s telling me that something is really, really wrong.

Do you think Konstantin would rather work with this new assassin versus Villanelle when she acts out like this?

I couldn’t really tell you what I really want. That’s actually some of the surprise in Konstantin, that we do not know what he really wants.

But I can tell you that Konstantin’s relationship to Villanelle is very close to big love and father/daughter relationship. 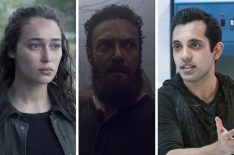 We saw Eve and Konstantin meet and talk in Episode 3. I thought those scenes were so intriguing to watch, these two people who are so focused on Villanelle, but he’s gotten a look at both women now and knows they’re obsessed with each other. Does he think they’re going to be each other’s downfall?

To handle both of them is quite a job. Both of them are actually behaving like teenagers and breaking the rules from each of their leaders and that’s so strange.

It seems like Konstantin knows what Eve wants and what Villanelle wants, so it is a surprise what way he will drive them. It’s a fun way. I loved seeing Konstantin and Carolyn together in Episode 3 because they have similar roles, wrangling these women who don’t always follow rules and are obsessed with each other. What was that like to play?

You’re right. It is a fun game, all the scenes with Konstantin and what’s going on. We are enjoying doing it because we know that something is going on also behind our backs, but we’re trying to keep it clean with the senses and feelings.

And Carolyn and Konstantin know each other very well. What you see in that scene is I’m actually trying to get the address for my family so I can see them because I miss them so much. That’s why he’s trying so desperately to try to make Carolyn relax as much as possible so he can have a chance to get [their location]. There was never a dull moment for these pairings from 'Killing Eve,' 'The 100,' 'Grey's Anatomy,' and more.

It doesn’t work like that. It’s definitely very dangerous for my family if somebody finds out where they are hiding.

And that’s why Eve is breaking the rule of giving me the address. That’s very strange that she’s doing that. That surprised me, too.

What are Konstantin’s priorities now? Where is his family on that list?

It’s a good question. There’s no doubt that I have a very, very strong relationship to my family, to my daughter, but at the same time, he is a guy that also is very connected to what he’s doing and these two things are sometimes a little problematic to handle, so that’s the conflict in him. That’s a very huge conflict. There’s no doubt that I really love my family.

In Episode 4, Villanelle asks Konstantin what else he would do if not what they’re doing. What would he do? Is there another job he could have? He’s not really qualified for anything else. I couldn’t see him in an office job.

No, you’re right. That would be very strange. That’s a fantastic conflict. She’s totally right, when she’s saying all that, “What would you do?” It’s so funny because I can’t say anything to that.