Sleuthers, you’re in for a treat, especially if you’re a fan of the Morning Show Mysteries on Hallmark Movies & Mysteries.

The mystery series starring Holly Robinson Peete as restauranteur, TV chef, and crime-solver Billie Blessings and Rick Fox as Detective Ian Jackson is in the middle of airing three new installments. Furthermore, the lead characters are finally ready to take that next step in their relationship.

TV Insider caught up with Robinson Peete and Fox to find out what to expect in April 21’s Countdown to Murder and April 28’s Death by Design.

How do you think each of your characters has changed as individuals and how they view each other going into the next two mysteries?

Rick Fox: For Ian, definitely there’s a lot of hope brewing from the [first new] episode, when we start to see that maybe he’s cracking through some of the distance that’s been between he and Billie in their personal lives. Also, he’s grown to understand that she has a genetic makeup as a crime-fighter coming from a crime-fighting family that he may have to accept, and that it can actually be of value if he can just let some of the control go. She is not a police officer, but she’s pretty darn good at solving mysteries.

But I think as you watch through the next coming episodes, you’ll see the personal connection grow and also maybe the crime-solving get a little easier for them.

Holly Robinson Peete: For Billie, she really, really wants Ian to own up to the fact that these two have so much in common, but she definitely wants to be more involved in the crime-solving, which is, in some places and sometimes can be actually illegal, so it’s definitely a slippery slope.

Billie is trying to stay in her lane, but she also has to balance and juggle her feelings for Ian plus her desire to solve every single crime that happens anywhere near her. It’s a real balancing act in her figuring out what to do.

Moving into this next movie, you’ll see that they’re finally connecting and figuring out that they may want to take this to the next level. What do Billie and Ian think of the other’s approach to crime-solving? Is there something they each admire and something that really gets on their nerves about the other?

But I think they may a good team if Ian would just embrace the talents that Billie has in this lane but he’s always pushing back. 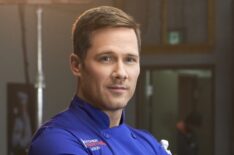 Fox: The thing that he recognizes and appreciates is her father was his mentor and partner, so there’s a definite respect for what she has grown up being attached to, in terms of the expertise of crime-fighting. Ian is well-aware of her genetic disposition to having a sixth sense to a villain, and in some cases, she actually maybe got a better sixth sense than he does. But if he acknowledges it, as we go along here, he starts to acknowledge that she’s just maybe a little better than him, always one step ahead. It’s inspiring, but challenging, when you’re constantly coming in second.

Billie and Ian appear to finally be moving forward with a romantic relationship. What’s coming up there in the next two episodes? Are you happy it’s happening now, or did you enjoy playing the slow burn?

Fox: Each of these movies have been a slow burn, but I think anything worth lasting is always going to have the initial foundation of ups and downs, and with the pacing of bringing authenticity and truth to any relationship, there’s going to be adjustments to fitting in for the long haul.

In this case, introducing my daughter and introducing some of the things that may be in Ian’s personal life when it comes to his own successes and failings in his past relationships, things that he has to get over, sharing those things openly is not an easy thing to do. But he starts to do that.

It starts to flow both ways. That’s creating for a longer burn than maybe the audience has an appetite for. I do recall shooting a kiss somewhere in there, in one of the movies, so if they’re patient enough, maybe they can see an actual connection. Robinson Peete: I’m just happy for the Sleuthers, our fans, because they are waiting anxiously to see this relationship go somewhere or go to another level. They’re very excited about that. I could see that in social media and engagement with all of our fans … So we have a lot of very excited fans to see where Billie and Ian are going to go.

I think the right amount of time has gone past. We’ve seen these guys really like each other and really want to spend time with each other. I think there’s not enough amazing things to know about Ian. He’s a great dad, too, and he puts his daughter first. And Billie’s down for that as well.

In Countdown to Murder, Billie and Ian definitely take a step towards another level of their relationship.

Speaking about Countdown to Murder, can you preview the case? And how those ducks with the Xes over the eyes in the trailer are involved?

Robinson Peete: The ducks are clues that the killer keeps leaving, almost like a countdown of different victims and different people that are on a list. It’s like a duck list. They keep turning up, with the little creepy Xes on the eyes. They’re very benignly creepy. But I really like the idea of the ducks. I think it really lends to the suspense of the movie.

I’m really excited about this one. We had a lot of fun shooting it. I’ll be honest, when I was reading the script, I was like, ‘Okay, I’m not following the duck thing.’ I couldn’t figure it out. I couldn’t quite put it all together.

And that’s what’s fun about these movies. The scripts are so suspenseful, and they’re written in such a way that we’re always trying to figure it out, even as we’re shooting it, and make it all make sense. So, when it all comes together, it’s really cool to see. Then there’s Death by Design. How difficult is that case, involving Billie’s childhood best friend, going to be for her compared to previous ones? Will Ian be there for her and act as a voice of reason and maybe devil’s advocate? [Watch an exclusive promo for this movie below.]

In life, whenever you have a dilemma and your personal life crosses with your professional life, even though Billie’s not professionally a detective, it’s always personal. This situation with her very, very best friend and them being twins, that one has a really good twist. I’m really excited for Death by Design because you just don’t see some of these things coming. And whenever you have twins involved in a murder mystery, there’s all kinds of twists and turns that are going to happen.

Fox: The crimes get a little more difficult to solve, so the additional help is definitely warranted. As sharp as Ian and Hawk [David Paetkau] may be, when you get a potential serial mystery involved where there’s clues, but the clues seem to be a ticking time bomb, with consistent mishaps around every corner, it heightens the intensity of getting this thing resolved quicker before another person goes down.

You’ll see that it’s a welcomed approach to have as many hands on deck in Countdown to Murder. The ducks, I would agree, are a little ominous. They started to become a little creepy.

Death by Design, I hope and I think it’s going to be our best one so far. So if you tune in for that one, our Sleuthers are going to get a good challenge there to uncover as it challenged us, even putting it up on the screen. Along the way, it challenged us to even follow along.

Are there any developments or fun storylines coming up for Billie and Ian’s families or coworkers?

Fox: Some of the characters [on the morning show set] are adding great value and color to Billie’s world with bringing lots of humor but also assisting in the mystery solving. Ian and Hawk’s relationship continues to grow as Hawk watches Ian and Billie’s relationship go in and out of being an effortless existence. Hawk has a lot of commentary around it. You’ll start to get some of the humor from some of the surrounding characters.

Robinson Peete: I like the restaurant, the precinct, the TV set, we have a lot of really great sets to pull and pretty interesting characters. I’m liking the way the characters are developing.

I love being so engaged with these Sleuthers online. They are so serious about solving these crimes, and I love watching it all unfold through their eyes. You can already see who they’re really gravitating towards in our cast.

They love Aunt Cassandra [Karen Robinson]. When they thought she was in trouble, they were panicked, like, “Wait, don’t let anything happen to her.”

You can see how they’re really starting to connect not just with Billie and Ian but some of the other supporting characters and I really like watching that process. If your characters were dropped into the middle of a Hallmark romantic comedy just as they are, with no mystery to solve, what would you want the story to be?

Robinson Peete: I always envisioned that Billie and Ian go to the Bahamas. It’s just a little dream, that they go to the Bahamas, and maybe they’re not solving crimes, but they’re doing some kind of Bahamian love story. Rick’s from the Bahamas so he’s got me thinking about the Bahamas all the time. What do we call it? Love in the Bahamas.

Morning Show Mysteries where to stream