Barry (Sunday, 10/9c, HBO): Emmy winners Bill Hader and Henry Winkler return for a second season of dark and bracingly original comedy in the ongoing saga of Barry (Hader, a series co-creator), a moody reformed hitman with the acting bug. He’d like to put his bloody past behind him — if only his over-the-top acting coach (Winkler) wouldn’t keep insisting he get in touch with his “inherent darkness.” If they only knew. 'Barry's sophomore effort is a triumph (as long as you’re not expecting a laugh riot), and in its last hurrah, 'Veep' is an unimpeachable hoot.

Veep (Sunday, 10:30/9:30c, HBO): All hail Selina Meyer (multiple Emmy winner Julia Louis-Dreyfus) in her crusade to make America laugh again — at itself and at the venal foibles of its most morally bankrupt and merrily profane public services. The vicious political satire is on fire in its seventh and final season as Selina hits the presidential campaign trail one last hapless time. Musical guests Sara Bareilles and BTS will appear with them.

Saturday Night Live (Saturday, 11:30/10:30c, NBC): Every so often, SNL announces a first-time guest host that makes you wonder what took them so long. So it is with Sandra Oh‘s debut appearance, coming a week before her buzzy Killing Eve series — which earned her a Golden Globe and SAG Award and Emmy nomination — returns for a second season. (Maybe Jodie Comer, her nemesis on the show, could do a cameo?) Tame Impala is the first-time musical guest. 'Killing Eve' Season 2 Trailer: 'When You Love Someone, You Do Crazy Things' (VIDEO)

The series returns this April on both BBC America and AMC.

Mrs. Wilson (Sunday, 9/8c, PBS, check local listings at pbs.org): It’s a role she was truly born to play — that of her late grandmother, Alison. Celebrated actress Ruth Wilson (The Affair) delivers a tremendous performance of mounting hysteria, despair and fury in this fascinating two-part Masterpiece drama of a woman searching for elusive truths about a husband who lived in a world of deceit. Newly widowed Alison fell for her intelligence agent-turned-spy novelist husband Alec (Game of Thrones‘ Iain Glen) during World War II, but after 20 years of marriage, she is rocked to learn his undercover assignments had double meanings. As the deceptions mount, Alison tries to shield her grown sons from the truth, spinning her own web of lies that leads to a moving crisis of faith. 'The Affair' star is in a role she was truly born to play in the gripping two-part Masterpiece drama.

The Walking Dead (Sunday, 9/8c, AMC): Winter has come for our suffering heroes, still reeling from last week’s incalculable loss at the hands of the evil Whisperers. Expect more tough decisions and conflicts as the survivors within the communities contend with a tremendous blizzard. Even Mother Nature is out to get them these days. 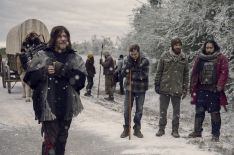 What hints about the Season 9 finale are revealed?

Inside Weekend TV: March Madness continues with the Elite Eight round of the NCAA Basketball Tournament beginning on TBS (Saturday, 6/5c) and continuing on CBS (Sunday, 2 pm/1c)… A bonanza for animal lovers. Nat Geo WILD launches a four-week run of Animal ER Live (Saturday-Sunday, 9/8c), from the creators of Live PD. Host Mark Steines guides the action with veterinary experts as live cameras capture real-time action in mobile veterinary emergency units from Boston to Portland, Oregon… Discovery’s Tigerland (Saturday, 9/8c) profiles conservation activists from India and Russia in their decades-long crusade to save the dwindling species of the endangered big cats… An eighth season of the PBS favorite Call the Midwife (Sunday, 8/7c, check local listings at pbs.org) opens in Spring 1964, with Britain celebrating the birth of the Queen’s fourth child, Prince Edward, and the midwives of Nonnatus House welcoming some additions — and the return of recovering alcoholic Nurse Trixie (Helen George).