The Trump Effect: How TV Shows Are Handling the President

Although Saturday Night Live‘s Donald Trump sketches (which will continue with Alec Baldwin as the president when the show returns this fall) may be the most familiar ways in which viewers have seen the new presidency covered on television in a non-news manner, many other TV shows have tackled the president and current political climate in the world of their characters. It’s become rare for a TV show to not address Trump—either directly or indirectly—since he’s practically ubiquitous, but how the shows do it is worth noting. The untitled animated series will be turned around in a timely fashion to keep up with POTUS's actions.

Here are how seven notable shows have reacted to Trump’s presidency.

It’s obvious that Broad City leading ladies Ilana Wexler (Ilana Glazer) and Abbi Abrams (Abbi Jacobson) aren’t fans of Trump, evidenced by the numerous “I’m With Her” references and their speechless reaction to Hilary Clinton’s appearance in Season 3. Moving forward, the show announced that the president’s name will be bleeped out as if it is profanity in the fourth season, which premieres September 13 on Comedy Central. When questioned about the censoring, Glazer commented that Trump has had enough airtime, and “it sounds gross every day saying it so many times.”

As Hasan Minhaj said at the 2017 White House Correspondents Dinner, “the news coming out of the White House is so stressful, I’ve been watching House of Cards just to relax.” The Netflix series has overflowed with political drama and deceit ever since its pilot, but much of the fifth season was inspired by real headlines. The writers incorporated current events into plot lines, such as suspicions of a tampered election and protestors chanting “Not my president.” Although Frank Underwood (Kevin Spacey) isn’t a Trump replica, their characteristics are eerily similar. 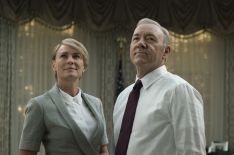 'The show’s digging into the boundaries of democracy, and I feel like so is the real world right now.'

Trump is no stranger to The Simpsons; his first mention on the long-running Fox comedy was in 1992. However, a few months ago the show released an online clip that depicts Trump and America reflecting on his first 100 days. In the clip, Trump recounts lowering his golf handicap and increased Twitter followers as major accomplishments. At the end of the short, Marge discovers she’s run out of antidepressant pills that were meant to last her the full four years. Like many, The Simpsons world seems to be awaiting the end of Trump’s four years in office.

The Carmichael Show never shies away from political discourse, making it one of the smarter sitcoms to be on television. The Season 2 finale consisted of each character supporting a different presidential candidate and specifically focused on the hatred that rises between differing political opinions. Amidst all the arguing, Jerrod Carmichael, creator and lead role on the show, stressed that true democracy occurs when you’re informed of both sides and reach a compromise. Although the third and final season doesn’t comment on the presidency, we expect to hear Carmichael’s opinions regarding the president in his next project. On Jimmy Kimmel Live, Tim Allen insinuated that the criticism he received for supporting Trump “is like being in ’30s Germany.” Allen’s conservative views correspond to his character’s beliefs on Last Man Standing. In Season 6 Episode 9, Mike delivers the commencement speech for his daughter’s business school graduation, and although the school requires the speech to be microaggression-free, he exercises his first amendment right (as Trump does in his tweets) and speaks his mind: “I’m proud to be an American…because it’s the land of opportunity. Some whiny babies might not think so, but in America, if you work hard, anyone can be successful.” Many believed the show’s cancellation was due to right-wing views, but ABC said they canceled the show because it no longer planned to air comedies on Friday nights.

Viewers of the TBS series will know that host Samantha Bee and her team have regularly taken the president to task. In the July 19 episode, Mike Rubens and Ashley Nicole Black hit the streets in L.A. during a protest for Trump’s impeachment, and it turns out that a lot of protestors aren’t aware just how long the impeachment process is. Rubens and Black try to convince the protestors to focus on specific issues and to vote in smaller elections to create incremental change rather than waste their time and energy waiting for an unlikely impeachment.