This will serve as Noah’s third time hosting music’s biggest night of the year as performers from all different genres are recognized for their musical contributions. Slated to take place Sunday, February 5, 2023, the ceremony will air on CBS and stream live on-demand on Paramount+. Returning to Los Angeles’ Crypto.com Arena, the coveted event will honor the industry’s best and brightest as several fan-favorite performers are nominated. Among the heavy hitters at this year’s awards are Beyoncé, Kendrick Lamar, Adele, Brandi Carlile, Harry Styles, and Taylor Swift among others who received nominations, which were announced in November.

Noah follows in the footsteps of other recent Grammys hosts such as Alicia Keys and The Late Late Show‘s James Corden. The news of Noah’s role also comes shortly after his surprising exit from The Daily Show which will now be helmed by a rotating group of guest hosts in the new year among which include Kal Penn, Chelsea Handler, and Al Franken. 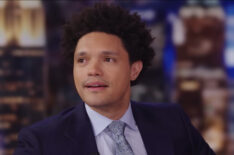 This year also marks the show’s return to Los Angeles as the 2022 ceremony took place in Las Vegas. Don’t miss the fun, catch Trevor Noah when he hosts the Grammy Awards on CBS and Paramount+ in the new year, and stay tuned for more updates on the annual awards show in the weeks ahead.