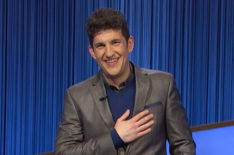 Matt Amodio Opens Up About His 'Jeopardy!' Streak and Getting Romantic Proposals

Could Mayim Do Jeopardy! and a Sitcom at the Same Time?

Question: Straight to it: I absolutely love Mayim Bialik as host of Jeopardy! I can’t gush about her enough, and I’m not even going to try to explain what I mean because I think you get it. The former producer was my top pick, but I’m so glad he’s out and Mayim is in. My question is: If she were to become permanent host after we’re made to sit through Ken Jennings’ next stint, how do you think that will affect the future of Call Me Kat? I know I’m in the minority, but I adore that show. Related, I thought Brooke Burns would have been great as Jeopardy! host, but figured she wasn’t considered due to her current contract with Masterminds on GSN. It makes me wonder how Jennings is able to do Jeopardy! with his commitment to both Masterminds and The Chase? — Mark

Matt Roush: Isn’t it nice to have some continuity again on TV’s greatest quiz show? What mail I’m getting on Jeopardy! lately has been quite positive regarding Mayim Bialik settling in for a long run, and I imagine that would have been true for nearly anyone they would have picked to move the show forward after the unfortunate Mike Richards incident. Her enthusiasm and engagement with the contestants help make the show a pleasure to watch again, though I refuse to speculate about what comes next after the headaches through the first half of 2021. (The “we’re made to sit through” crack suggests Mark isn’t a fan of Ken Jennings in the role, but as a consulting producer for the show, he’s not going anywhere anytime soon). About juggling Jeopardy! with other gigs: Keep in mind that while hosting Jeopardy! isn’t for amateurs, it’s also not a full-time occupation necessarily, with a full week’s episodes taped in a single day two days a week, roughly every other week. This would presumably give Mayim Bialik plenty of time to work this around her sitcom taping schedule, and the same goes for Jennings’ other commitments. Should either be lucky enough to be named permanent host sometime in the new year, or even sharing the job going forward, they might need to set new priorities eventually. But for now, it’s probably doable.

Getting Hooked on New Fall TV

Question: Of the new fall shows, I really like CBS’ Ghosts and ABC’s The Wonder Years (kudos to Dulé Hill). I’m wondering which shows are “can’t miss” for you? — CCM Matt Roush: As has been the case in recent years, there aren’t nearly as many new network shows to pick from as there used to be. By coincidence, in the next issue of TV Guide Magazine (out next week), I’m reviewing both Ghosts and The Wonder Years very positively as the fall’s breakout comedies. They’re both terrific in very different ways, and I haven’t missed an episode of either yet. I had high expectations for The Wonder Years, given my fondness for the original series, but Ghosts is a particularly delightful surprise. Elsewhere, I’ve already made my admiration known for the ambitions of NBC’s Ordinary Joe, and I’m trying to find time to catch up on Fox’s intriguing The Big Leap to see how it’s coming along. Beyond that, the only new show I’m watching avidly — make that hate-watching — is NBC’s La Brea as the guiltiest of cheesy pleasures.

The State of NCIS Minus Gibbs

Question: I’m still mourning the loss of Gibbs on NCIS but giving Alden Parker (Gary Cole) a chance as his replacement. Since Cole’s contract is for one year, wouldn’t it be interesting to bring Scott Bakula in from NCIS: New Orleans as a permanent replacement, especially since his wife previously worked in the DOJ? It would be a natural work transfer for both of them and would make for an interesting team dynamic. Your thoughts? — Cathy Matt Roush: They could certainly do worse, and it might help appease the fans who are still agitated that CBS took NCIS: New Orleans off the air after seven seasons. Still, for however long Gary Cole’s contract is with the show, it shouldn’t be underestimated what a smart move it was for NCIS to land someone with his considerable chops, distinguished resumé and undeniable charisma to see the series through this transition.

Comment: I guess there are more ridiculous ways to write off Gibbs on NCIS, but CBS wins the Oscar for an unsatisfying, disrespectful storyline. They seem to have a knack for getting rid of people in a disjointed, weak, nonsensical manner. Very disappointing. — Diane

Matt Roush: Not to pick on Diane, but vague yet negative comments like these tend to frustrate me. What was disrespectful about seeing Gibbs happy for a change? Does finding peace after a long career with a fair share of violence and tragedy make one weak? I get it that many fans will never be satisfied that Gibbs/Mark Harmon has left NCIS as a regular presence, regardless of how it played out. (Maybe the dissatisfaction comes from Gibbs being suspended and ending this chapter of his career in exile rather than receiving the hero’s tribute he deserves.) But would it have been better for him to go out in a hail of bullets, instead of receding into the distance — since it was McGee who flew off into the sunset — so when the time comes he can make a special appearance from time to time? His departure wasn’t really a surprise, given the events of this multi-episode arc. But I’m not sure it qualifies as ridiculous, either.

Should Al Get More Serious About Afghanistan?

Question: CBS’ United States of Al started off the second season with a very strong show about the fall of Afghanistan. Since then, however, they have barely mentioned it. I mean they are talking about trying to get Al’s sister to the U.S. but, besides that, if you missed the first episode you wouldn’t even know they were talking about it! Is this just because it’s kind of impossible to talk about it without getting political and they don’t alienate anybody? Especially in today’s environment! Just find it sad. They had such a great opportunity and they seem to be blowing it! — Mac S

Matt Roush: I would recommend patience. Only three episodes have aired, and the writers are still processing how to balance humor with the harsher realities of current events. Case in point: Next week, on Oct. 28, the episode will deal with Al having panic attacks from stress, causing his new family to urge him to seek treatment. A week later, the episode will seemingly be much lighter, dealing with Al’s romantic life when he begins dating Ariana. And the storyline about getting his refugee sister to America continues as well. So while I agree that the season premiere was powerful, a show like this can’t hit that beat every week. 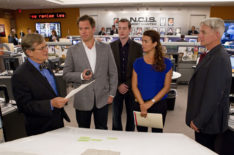 As you’ll see in the following question, almost any time a sitcom takes a serious turn there’s pushback from fans who would rather just be entertained. Add that to the polarized politicization of nearly everything in today’s society, and United States of Al has a more delicate balancing act to pull off than most. Give it time, and also the latitude to turn away from the tragedy in Afghanistan on occasion, though I’m sure the result will sometimes feel forced and clumsy. Bottom line: This is not a documentary, and in the big picture, they’re trying to do right by this difficult situation.

Comment: I never watched The Big Bang Theory but have been an ardent fan of Young Sheldon since Day 1. It has been laugh-out loud funny and also touching. BUT this season is downright depressing. I realize they are trying to set up the family history/dynamic that is known later, but can’t they take some dramatic liberties and keep the show in an uplifting tone? We need laughs and not sorrow watching a family fall to shambles. Curious if you agree? — Scott Matt Roush: Now that it’s in its fifth season, I figure Young Sheldon has earned the right to add some dramatic meat to its whimsy, which hasn’t entirely gone away. (Wallace Shawn and Ed Begley Jr.’s drunken duet on “Lollipop,” for instance. And anything involving Meemaw.) George Sr.’s health issues, his momentarily wandering eye sending him on a major guilt trip, and now Georgie facing the consequences of dropping out of school are all solid and credible situations. It doesn’t necessarily turn Young Sheldon into a downer. But it’s also the case that like with many family comedies, as the kids get noticeably older the tone begins to shift, because they’re not as cute as they used to be. Which leads to the next question.

Question: The kids on Young Sheldon are sure growing up. Don’t you think it’s about time Missy and Sheldon got their own rooms? — Maria W

Matt Roush: I’ve been seeing comments like this for quite some time, and I imagine it wasn’t lost on you that Missy’s first reaction upon hearing that dropout Georgie might be moving out — or might be thrown out by his angry dad — was to call dibs on his room. I’m not intimately familiar with the layout of the Cooper house, but if they had an extra room that could be turned into a bedroom for Missy, they probably would have done it long ago. But selfishly from the writers’ point of view, some of the best scenes of any Young Sheldon episode are those in which Sheldon and Missy share their secret thoughts (and insults) after lights out, and I bet the producers want to keep that going for as long as they reasonably can. 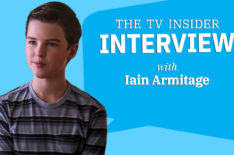