Garth & Trisha Live! A Holiday Concert Event (Sunday, 8:30/7:30c, 8 pm/PT delayed, CBS): Superstar country couple Garth Brooks and Trisha Yearwood scored this spring with an at-home musical special during the pandemic’s early days. Naturally, this calls for an encore, and no better time than the holidays. So once again, they’ll be performing live from their home recording studio without an audience, taking fan requests as they sing some of their favorite holiday classics and possibly a few surprises. Christmas Movie Conveyor Belt: It just keeps chugging along in the last weekend before Christmas. On Hallmark Channel: A Christmas Carousel (Saturday, 8/7c), where a royal family hires Lila (Rachel Boston) to help the handsome prince (Neal Bledsoe) restore a vintage carousel as a present for his niece, and off they go on a romantic ride… In Cross Country Christmas (Sunday, 8/7c), Rachael Leigh Cook and Greyston Holt are former classmates who brave a storm and multiple modes of transportation to get home to Colorado for the holidays, possibly becoming more than just travel companions. On Hallmark Movies & Mysteries: Lindy Booth and Justin Bruening are Swept Up by Christmas (Saturday, 10/9c) as they downsize a magnificent estate and discover antique treasures that help reconnect the home’s owner with his Christmas past… Project Christmas Wish (Sunday, 10/9c) is a dream come true for Lucy (Suits‘ Amanda Schull), whose annual seasonal philanthropy pays dividends in love. 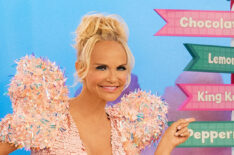 The singer/actress hosts a competition series in which professional confectioners fight for the ultimate sugar rush.

On Lifetime: A Christmas Exchange (Saturday, 8/7c) puts a romantic twist on home swapping when Molly (Laura Vandervoort) trades her farmhouse for Patrick’s (Rainbow Sun Francks) trendy London apartment, and vice versa. Though settling in on different continents, their emails and texts suggest they might end up under the same roof someday… A Christmas Break (Sunday, 8/7c) refers to a school going dark, possibly for good, unless a teacher (Cindy Sampson) can save the day, with the help of a Hollywood actor (Steve Byers) who’s come home to remind him where he came from. 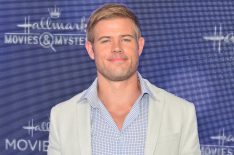 Hallmark's Trevor Donovan on 2020, From Holiday Movies to His Favorite TV Moment (Video)

Plus, our holiday edition Q&A reveals a pretty great Christmas dinner (steak & lobster, anyone?) & how 'Elf' has won his heart.

Letters to Satan Claus (Saturday, 9/8c, Syfy): And then there’s this macabre seasonal spoof, from the network that knows how to deliver cheese on demand (think Sharknado). This is the story of an investigative journalist (Karen Knox) who visits her hometown of Ornaments to cover the local Christmas festival. What could go wrong? Holly apparently forgot about that letter she mistakenly sent to Satan instead of Santa when she was 7 — long before spell check — asking St. Nick to make her parents “go away.” Now it’s up to her to stop Lucifer from a killing spree. The ABCs of COVID-19 (Saturday, 10 am/9c, CNN): This is not going to be a normal Christmas for anyone, kids and parents alike, and the fifth town-hall collaboration between CNN and beloved Sesame Street characters faces this yuletide quandary head-on. Big Bird and his Muppet friends join CNN’s chief medical correspondent Dr. Sanjay Gupta, anchor Erica Hill and experts from across the country with advice on how to celebrate the holidays from a safe distance and how to stay healthy during the challenging winter months ahead. Inside Weekend TV: John Legend hosts NBC’s Global Citizen Prize Awards (Saturday, 8/7c), honoring those who’ve taken action against poverty in the fields of government, business and the arts, with awards for youth and citizen leadership… In the CNN Special Report Pandemic: How a Virus Changed the World in 1918 (Saturday, 9/8c), Anderson Cooper looks back at the deadly 1918 Spanish Flu outbreak, with commentary from Dr. Anthony Fauci and historian John Barry… The versatile Kristen Wiig is back for the Christmas/year-end show of NBC’s Saturday Night Live (11:30/10:30c), her fourth time as guest host, joined by Grammy-nominated Dua Lipa for her second turn as musical guest… From MTV’s Documentary Films Unit, Gay Chorus Deep South (Sunday, 9/8c, Pop TV and Logo) follows the San Francisco Gay Men’s Chorus and members of the Oakland Interfaith Gospel Choir as they travel to Southern states, including crossing the iconic bridge in Selma, to spread a musical message of tolerance… Gayle King hosts CBS’s 22nd annual Home for the Holidays special (Sunday, 9:30/8:30c, 9 pm/PT) with uplifting stories of adoptions from foster care and performances from Josh Groban, Miranda Lambert, Meghan Trainor, Leslie Odom Jr., and Andrea Bocelli… The finale of the Food Network competition Candy Land (Sunday, 9/8c) finds host Kristin Chenoweth tasking the final two teams to whip up something truly scrumptious for King Kandy to win the grand prize. Goes down well with eggnog.