After 20 years of landlording over all sorts of roomies-in-lockdown, host Julie Chen Moonves is the voice of experience when it comes to surviving inside the Big Brother house.

As the all-stars enter their third week on the reality hit, she divulges the rules they should be following to win that $500,000.

“Loose lips sink ships. Perfect example? Season 16’s Derrick Levasseur [understood] this strategy, and he went home with the grand prize. No one knew he was actually an undercover detective outside the house. He played his strengths from his real-life profession in the game and won! Bonus: No one was mad at him in the end!” 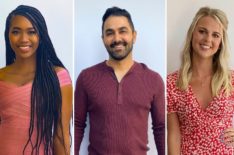 Find out who's back to compete to be the last remaining Houseguest and win the $500,000 grand prize.

“[Smart players] practice beforehand at home by eating plain oatmeal and testing out new recipes to make it sweet, salty and savory. When it’s your week to be a “have-not,” you’ll be happier. You may even make more allies by preparing decent slop meals for your fellow have-nots!”

“I highly recommend this to keep your sanity! Don’t do what Cliff Hogg III did last season and talk aloud to the cameras because the others overheard him and his whole strategy! Instead, talk to God in your head—he’s the original Big Brother.” “Even if it’s finale night and you’re sitting in the final two and have to face the jury you perhaps backstabbed. No one likes a liar. Plus, the truth always comes out…eventually.”

5. Look for the best in your housemates.

“Ignore their warts and put yourself in their shoes. Have compassion. It will go a long way and make others more forgiving toward you and your warts!” Who will survive eviction in the weeks to come? Let us know which All-Star has the best shot at winning.