The vows have been exchanged and it’s time for the next leg of Married at First Sight‘s 11th season as the couples face their biggest challenge yet… the in-laws.

Plus, learn more about new spinoff 'Unmatchables' joining the franchise.

In this week’s installment, “What Happened Last Night?”, the reality series’ newlyweds spent their first day of married life meeting parents, siblings and friends to get a better understanding of their partners. From every awkward conversation topic imaginable to the subject of their honeymoon location, we’re breaking down all of the major moments from the episode. On their first night together, the couples had varying experiences. Amelia and Bennett were blissful and silly as their quirks took over with him revealing some interesting sleepwear that consisted of a dress-length shirt. Brett learned that Olivia doesn’t prefer luggage to be placed on a bed for germ reasons as they sorted out which sides of the bed they wanted. As for Christina and Henry—the awkward silence continued into their hotel room. Meanwhile, Amani and Woody brought the party to Miles and Karen’s room before turning in for the night. And Miles and Karen fell asleep as exhaustion quickly took over. Once morning arrived, the couples chatted and nibbled on some room service breakfast. Amelia and Bennett traded glasses and learned they have nearly identical vision, while she also questioned his dress, curious about his sleepwear, of course, and his answer was just totally on-brand as he revealed it’s all about comfort. Christina revealed in a video diary that she is looking forward to traveling with Henry, who doesn’t seem to have a lot of jet-setting experience. She also commented on his female friends, feeling as though she’d been accepted by them. Amani is triggered when she hears her husband “smacking” the croissant he’s eating, reminding him that the sound of chewing is her pet-peeve. Karen finally gave Miles her phone number and Olivia and Brett began their day on the right side of the bed. And this was just the calm before the storm. Miles met with just Karen’s mother, sister and brother-in-law as her father remains uncomfortable on camera. During the meeting, mom Kathy tries to make sure he’s going to take care of her daughter and not string her along. After the cross-examination, Kathy seems pleased and noted that she may have to talk to her daughter if she begins second-guessing the seemingly perfect pairing. As for Karen, she met with Miles’ parents and sisters for a… tense brunch. Everything was pretty calm until Miles’ mother asked if Karen would be submissive to her husband in a “non-sexual way” and Karen did hint at a penchant for letting the man take control in the relationship, but that the woman is the “neck.” Karen admited she is slightly nervous about Miles’ mother though, after the matriarch referred to herself as a “mama bear.” When Bennett meets Amelia’s mother and brother, he’s told that they think the match was like seeing two puzzle pieces meet. The one area of possible contention was the subject of Amelia’s possible residency outside of New Orleans, and while Bennett suggested that he’d move under the right circumstances, it was clear he wasn’t ready for that big of a commitment. As for Amelia, she met with Bennett’s sister and parents, all of whom were very welcoming, but the conversation took a strange turn when the sister brought up Bennett’s feelings about children. According to her, Bennett thinks having biological children is unethical and prefers adoption. When it’s Olivia’s turn to meet up with Brett’s brothers, the conversation also turns to children and she’s quite candid about not having any particular interest in starting a family right away. She tells them that she wishes to accomplish other things in life before making that decision. Meanwhile, Brett meets with Olivia’s parents who question his stance on religion and if he has an issue with Olivia’s Christianity. He shows no—outward—issue with the matter and promises to take care of her. When Amani meets with Woody’s mother, grandmother and friends, she inquires about his temperament and whether or not he gets really heated in arguments. His grandmother said he’s good, but Woody’s mother admits she’s seen the “devil come out” of her son before. This unsettles Amani as she’s not one for confrontation. When Woody meets with his new in-laws, they ask about his past and he is openly candid by revealing a former relationship in which he and his partner both cheated on each other. He says that marriage is a forever thing for him though, and he has no intentions of separating from Amani. This, at least, seemed to settle any tensions for the time being. 'Married at First Sight': 8 Key Moments From 'It's Not the First Time' (RECAP)

The wedding festivities continued in this week's installment. In an especially awkward moment, Henry’s father informs Christina that she can dominate Henry because of his quiet and introverted nature. Christina also mentions to the boisterous group that she’s looking forward to traveling with Henry and sharing a new experience with him. The silence continued during Henry’s meeting with Christina’s mother and grandmother in which they reveal her love for gumbo and the need for strong communication. Henry then admits he’s not a great cook, but Christina’s mom suggests that they take time to learn together as a bonding experience. Following the in-law meet-ups, the couples chatted about their experiences including Karen’s brush with Miles’ mama bear. Christina mentions liking Henry’s father during their reunion and Amani inquires about Woody’s thoughts on his own anger levels. While on the topic, Woody reveals that he does know how to manage his anger whereas, in the past, he would struggle with it. Brett tells Olivia that her family is very protective of her and she teases that she almost didn’t make it out of brunch alive, joking about his brothers being tough on her. Amelia asks Bennett about his stance on children and while he admits he does feel strongly about adoption, having biological kids isn’t something he’s opposed to. Bennett also brings up Amelia’s residency and he says moving away from New Orleans is something he’d consider if things continue to go well with them. 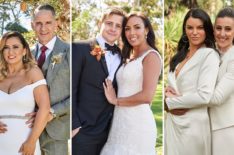 Get to Know the 'Married at First Sight: Australia' Cast (PHOTOS)

Lifetime's fan favorite is going Down Under. As they prepare for their honeymoon, the couples received packages with special gear and learned that the location of their getaway is the exotic Hotel Xcaret resort in Mexico. After meeting at the airport, the couples arrived at their destination and began settling in—a process that involved Christina and Henry drinking Mezcal and Amelia and Bennett jumping into the pool as soon as they unpacked.

What will this tropical adventure hold for them all? Don’t miss out on what comes next when Married at First Sight returns next week.