Worth Watching: How Women Got ‘The Vote,’ TCM’s Star of the Month (Tony Curtis), Guest Hosts for Kimmel

The Vote (9/8c, PBS, check local listings at pbs.org): On the 100th anniversary of the 19th Amendment, this eye-opening two-part American Experience special reminds us that women weren’t given the right to vote. “We took it,” says one of the spirited experts who recall the bruising battle that led to its passing. The Vote spotlights largely forgotten warriors like Carrie Chapman Catt (voiced by Laura Linney) and the militant Alice Paul (Mae Whitman) as they work within and often outside the political system to force change, often putting their lives at stake in pioneering acts of civil disobedience. 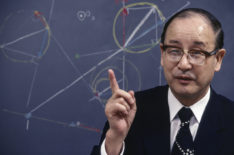 Tony Curtis: Star of the Month: Hard to believe this is the first time the handsome movie star (1925-2010) has been given this accolade, and the first of his weekly tributes (each Monday in July) includes a career high with his Oscar-nominated performance in 1958’s The Defiant Ones (10/9c) opposite Sidney Poitier. But first, 1956’s Trapeze (8/7c), a circus drama in which he and fellow aerialist Burt Lancaster compete for the affections of Gina Lollobrigida. Plus, he reveals what Jeff Winger would be doing in quarantine.

Celebrity Game Face (10/9c, E!): Kevin Hart hosts this frolicsome special with wife Eniko as they lead other celebrity couples through a game night of physical and mental challenges. Playing along: Terry and Rebecca King Crews, Modern Family‘s Sarah Hyland with fiancé Wells Adams, and Joel McHale (making his first appearance on E! since his tenure on The Soup) with wife Sarah. After sharing embarrassing teenage dance moves in a “tik talk” challenge, other stunts include feeding each partner a messy meal and trying to interpret what they’re saying with a full mouth. If that’s not hard enough to swallow, the grand prize (beyond playing for charity) is a “Hart of a Champion” trophy, a gold statue of baby Kevin. What, they were out of mirrorballs? 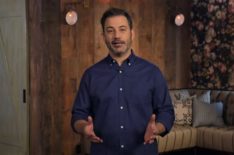 Jimmy Kimmel to Take Summer Off, Guest Hosts to Take Over 'Live!' Duties

Plus, see Matt Damon crash his announcement in a hilarious bit.

Jimmy Kimmel Live (11:35/10:35, ABC): With the host on hiatus for the rest of the summer, Anthony Anderson (black-ish) is the first guest host to sub for Jimmy, with co-star Tracee Ellis Ross as his guest, along with Muriel Bowser, the mayor of Washington, D.C. Later this week, Billy Eichner takes over for shows on Wednesday and Thursday.

In other late-night news, TBS’s Conan (11/10c) moves production from Conan O’Brien‘s home to the Largo at the Coronet theater in West Hollywood, with limited crew, no studio audience and guests continuing to appear via Zoom.

Inside Monday TV: Among the many tributes to the late, great Carl Reiner, AXS TV replays his 2019 appearance alongside famous son Rob Reiner on The Big Interview (9 am/8c) with Dan Rather… Also returning for a second look: Jeopardy!’s 2019 Tournament of Champions (syndicated, check local listings), with James Holzhauer as the marquee player… HGTV’s new Masters of Home (9/8c) enlists renovation experts Dave and Kortney Wilson (Masters of Flip) to help folks turn their fixer-uppers into dream homes, starting with a couple living in the husband’s way-outdated childhood house.