We all may be stuck at home, but Netflix is planning to send viewers into heat, via steamy North Carolina and Outer Banks, their new flesh-baring thriller that takes the trashiest-slash-best parts of Dawson’s Creek with the craftiest parts of Ozark (minus Ruthie’s over-the-top profanity). Or The Goonies meets VSCO, if you like.

Described as a coming of age story set in the beachy vacation spot, Outer Banks is flush with hot young friends (led by the genetically unfair Chase Stokes), who find themselves swept up in the mystery of one buddy’s missing father (Nashville‘s Charles Esten) and a whole bunch of cash. The 10-episode first season kicks off with a storm that knocks out power to the area, leaving these hormonal fitspirations free to strip down and let loose instead of working their summer gigs. Before you can say “I hope he uses SPF,” twists, turns and town secrets are bubbling up to the surface, sex is everywhere and oh yeah, there’s a bunch of rich vacationers who need to be punched in the throats. Toss in a treasure hunt and some stunning cinematography and yeah, we’re hooked.

Check out their just-released official trailer and tell us you’re not all-in, as well.

The soapy drama was created by Jonas Pate (Aquarius, Surface) and Shannon Burke, a TV first-timer who previously consulted on the feature Syriana and co-produced 2002’s Abandon, which ironically co-starred Katie Holmes… of Dawson’s Creek. Is it too early to start hoping for a Season 2 guest appearance?! 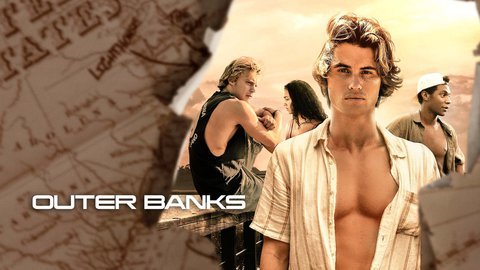