This Is Us is heading into its final episode of a Season 4 trilogy, but there’s more than just a special story when it comes to the installment — it’s also star Justin Hartley‘s first time directing for the series.

Helming the Kate-centric episode, Hartley, who delivered another stellar performance as Kevin Pearson in the previous episode “A Hell of a Week: Part Two,” approached the Dan Fogelman show from a new perspective. Not everything not as perfect for the teen lovebirds as it appears on the surface..

We caught up with Hartley ahead of the series’ return (after a one week hiatus due to the State of the Union), and he teased what’s next for Kevin, what to expect from Kate’s (Chrissy Metz) episode and what’s beyond for the Big 3. Plus, he shares what it was like to be in the director’s chair this time around.

The Big 3 have been through the wringer and are planning a Pearson family cabin trip. What should fans expect moving forward?

Justin Hartley: This episode sort of lays the groundwork for another sort of a question mark into who is this mystery woman? Who is [Kevin’s] baby mama? So you just keep adding new people to the fold. But, I think we’re going to find out a lot about Kevin. We’re going to see Kevin in the remainder of this year and maybe even next year as well take on things and do things that we couldn’t even imagine him doing before. But it all makes total sense. And you know, life is not perfect and you roll with it. And I think we’re going to see him in positions and circumstances that I think two years ago you would’ve been like, “This is a different show.” The guy, he’s going through some stuff, but it’s all good. I think he’s going to figure it out or he’s going to fall off the wagon and get hammered again. I don’t know. But I think he’ll be okay. I hope he’s okay.

We know Kevin’s going to be engaged with an expectant fiancée, but should we take stock in Madison (Caitlin Thompson) as the real deal? Will she be more than just Kate’s best friend and a casual hookup?

I don’t want to say either way, just because I don’t want to give anything away. If you’re watching a show and you see how his life is sort of unfolding and the choices that he’s making, and the people that he’s with and he’s surrounding himself with, and the things that he’s saying, I think you’ll find that everyone that he comes in contact with, he’s looking at them in a different light. Plus, he teases 'wild' things ahead for Kate, working with Justin Hartley on the role and more.

He’s interpreting and taking in all of these people that he comes in contact with in a much different way than he used to. And that goes for everyone that he knew before. His family members, his friends, and also brand new people that he might meet. And sometimes that’s a little bit dangerous. But that’s how he’s taking people in now. And that’s how he’s processing life and other humans. So I think we can assume that every single person that he meets could be someone. Right?

Definitely — he’s putting a little too much stock in the people he meets and encounters.

Well that’s the thing, right? He might be putting too much on the result as opposed to on the journey and the moment. His whole thing is like, “I’m going to get married and have a kid.” It’s like, dude, you’re so result oriented, just enjoy your life. But I also think it’s funny to see Kevin with a biological clock. Not many people are aware of the fact that Caitlin Thompson — the actress who plays Madison — is actually Dan Fogelman’s wife. What kind of conversation took place when this Kevin-Madison plot point was introduced?

Yeah we talked about it, we talk about everything. And I think Dan is one of those guys that in a million years you would never guess that he is who he is because he’s such a kind, generous, amazing human being. He’s one of the best we have on the planet and he just talks to you about everything. He wants to make sure that you’re comfortable and all that stuff. So he’s really great.

Dan aside, and wife aside, it doesn’t even matter. She really is a remarkable actor and so comedically gifted. The lines are, they’re funny, but they’re really difficult to make funny. And if the timing is off or the pace is off or the tone is off on her lines, her little zingers that she comes in with, it’s not funny. She has to nail every time and she’s super talented. Plus, a major cliffhanger changes the game.

While Randall’s episode dealt with anxiety, yours seemed to deal with letting go of old things and looking to the future – what can you say about Kate’s episode and what it will tackle?

It’s a lot about how relationships that you are in shape who you are and who you become, and how you can figure out a way to let go of that, or sort of learn from that. And also a reconnection between her and her mother. You know, this relationship has been sort of strained and that’s a tough relationship. You’ll see a different side of it in the episode I directed.

I say we directed because I feel like the actors directed it as well because we were all working as a team, I was just in the chair. But we really did something special. These people, Mandy [Moore], Chrissy, Milo [Ventimiglia], Chris Sullivan, all these people, they were incredible. But it’s an interesting thing to see it from a different perspective. To be behind the monitors and watch it from a little bit of a distance, instead of being in the scene, you actually get to watch these incredible performances and raw footage and it’s not scored yet, and it’s just them being real and honest and amazing. 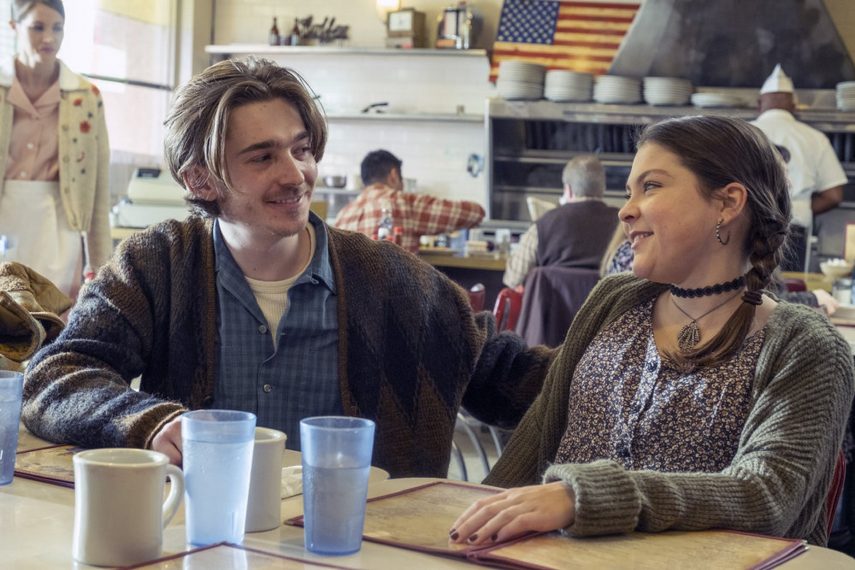 It’s like how did these relationships that you had shape who you are now and how does that inform and sort of lend itself to all the difficult things that you’re going through right now? And if you hadn’t met that person, maybe you wouldn’t have these hangups and these problems in your life. So it’s an interesting thing, these relationships. You’re like, “Wow, that’s all the bad stuff, but also this is all the good stuff.” It just gets you sort of thinking about life in a philosophical way. And then that’s what our episode did, I think. In [Episode] 13 you see the beginning of how Kate is the way she is. Also, you see darkness, but also we tell stories that are [sweet].

You mention this is a dark episode, but will there be any lighter moments?

One hundred million percent, yes. That was sort of the theme, when I was looking at [the episode] I was like, this is yin and yang, this is unbelievable.

Did you seek any advice when it came to directing? You did reunite with M. Night Shyamalan in a recent episode again.

He’s fantastic. He is hilarious. I mean, literally I broke like four times working with him. Who knew that M. Night Shyamalan was going to crack me up? It’s a riot. But I’ve always been — and I love M. Night, I think he’s a genius — fond of Robert Redford’s demeanor and also sort of Clint Eastwood, and their demeanor and the way they go about their work.

I got a chance to work with Ron Howard a couple of years ago and he’s just the nicest human being and super talented as well. He does everything. So I thought I would be remiss if I didn’t watch this masterclass. He does such a great job of explaining his philosophy on collaboration, and process, and detail, and how you get what you want, but also have to be open to other people’s ideas. And just listening to him talk about that and how humble he is, after everything he’s accomplished. [It’s] a really good thing that I watched this because it set the tone for how I was going to handle the set. Can you tease whether or not fans will get to see Kate react to Kevin’s hookup with Madison? Or will it remain a secret?

Kind of. We know that her and Kevin are still talking a year from now whereas they’re not talking to Randall.

Will Kate’s episode offer an insight as to the nature behind the Big 3’s estrangement in the future?

So that’s a really good question. A little bit of a tricky question. I don’t want to lie to you. So the answer is kind of, no. But then once you see the subsequent episodes after 13, then you’re going to go back and be like, “Oh, it kind of did.” What else should we anticipate for the rest of Season 4? Will any characters be returning?

We’re going to go shoot in New York for a little bit. That’ll be fun. And you’re going to find out the Kevin and Randall thing. It’s big and it’s two people both having an idea about how to handle something that’s very important to each one of them. And they’re just not, they’re not seeing eye to eye on it and it becomes a deal breaker. And they both take a hard line and it’s two stubborn grown men — not a good combination when they disagree. But we’re going to see [that] unfold here in the next few weeks as well.