[Warning: The below contains MAJOR spoilers for Season 6, Episode 9 of How to Get Away With Murder, “Are You the Mole?”]

How to Get Away With Murder just killed off a major character — and promptly brought another one back to life.

The fall finale revealed that Asher was the dead informant we’d been hearing about in the flashforwards before showing more of Annalise’s funeral from the end of the Season 6 premiere. And this time, “a special speaker who has known Annalise for a long time” was the first to share his thoughts, memories, and prayers for the dearly departed: Wes. Yes, the person who supposedly burned to a crispy death years ago.

How is that possible? We take a look at potential explanations for Alfred Enoch’s return. Season 6 kicked off with Annalise envisioning her own funeral as part of an exercise in rehab, and that included Christopher opening her casket and pulling a gun on her. Could it be that this is a similar scenario, one in which Annalise (or someone else) might envision her death came in a way and at a time that meant Wes lived? There could be something poetic about father and son being part of both. We did just see Annalise start over as “Justine.” Is it possible that we were duped into thinking the burned body that looked very much like Wes’ wasn’t in fact his? Could his death have been faked the same way that Annalise is about to start over?

This always has to be considered a possibility. Maybe the twin was the one who died (though we would have to get a lot of backstory to explain it). Maybe the twin tries to take over Wes’ life. 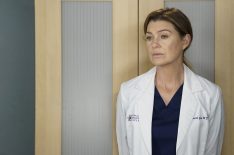 Anything is possible, and it’s going to be a long wait until April to get answers.