‘Outlander’ Season 5 at NYCC: ‘Revolution Is Over the Horizon’ & More Things We Learned

Outlander‘s fans were treated to plenty of goodies during the show’s New York Comic Con panel which took place at The Hulu Theater at Madison Square Garden on October 5.

While fans may have to wait for the show to return for Season 5 in February of 2020, the stars revealed a special sneak peek teaser trailer which finds the Frasers torn over time as Claire (Balfe) worries for her daughter in the 18th-century. But that’s just scratching the surface, below we’re breaking down all of the key moments from the event.

Things kicked off before the panel even began when fans playing a game on stage turned into a spontaneous marriage proposal. The romantic moment garnered cheers from the enthusiastic crowd before the real festivities started.

Stars Sophie Skelton and Richard Rankin also got in on the fun despite not being in New York as they answered fan questions via video message. They couldn’t make the event due to filming for Season 5 in Scotland, but they eased the blow of their absence by introducing the new teaser which received plenty of screams from excited fans.

As the conversation started, Zee picked the brains of executive producers Ronald D. Moore and Maril Davis about what viewers should expect from Brianna (Skelton) and Roger (Rankin) this season. According to Davis, fans will see that Brianna is “still dealing with the after effects of [Stephen] Bonnet,” who raped her in Season 4. Viewers will see her “dealing with the ramifications of the attack.”

Roger on the other hand is settling into life in the 18th-century and his extended family including Jamie (Heughan) and their “complicated relationship, that will continue,” Moore promised. “This season it expands,” Moore added, “you feel the world open up a little bit more.” And “Revolution is over the horizon.”

Specific detail about what Season 5 will include remained vague, but Gabaldon did share that in her favorite scene “the words ‘f***king bastard snake’ were spoken,” which fans were excited to hear. And expect some good things from Murtagh this season as Duncan Lacroix told attendees, “I think [it’s] the best work I’ve done on the show next season.”

Here are some of our favorites, in celebration of the actress' 40th birthday.

As for his seemingly series regular return, Davis said, “We love Duncan so much and we didn’t want to let him go.” That’s why Jamie’s curmudgeonly godfather is sticking around for now. The festivities continued and Zee interrupted, revealing that panelists were allowed to opt out of answering a question in exchange for taking a shot of whiskey.

Kennedy was all too keen to opt for the whiskey when it was her turn to answer questions about Jocasta’s story in Season 5. The actress joked that she’s bound to ruin any surprises and didn’t want to spoil fans. “You better just give me the whiskey,” Kennedy said. 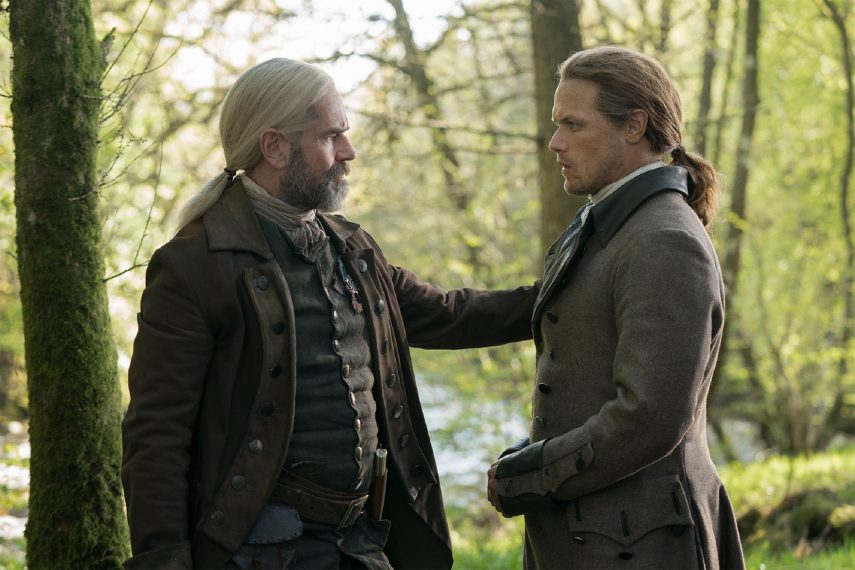 Zee noted that stars Balfe and Heughan are producers this upcoming season, and asked why that means for them. They joked that it means nothing if the show isn’t good, but if it is then they enjoyed seeing the processes for other areas of the show beyond filming.

And for viewers that are expecting more romance between Jamie and Claire, rest assured they’re still as enamored as ever. “It just keeps expanding,” Balfe assured viewers about the love between Claire and Jamie, “they’re there for each other no matter what.”

Heughan’s response got quite the reaction from audience members when he concurred with Balfe by saying, “We made love without making love.” As cheers and howls echoed through the theater, Balfe tried to help her costar saying, “We sort of have a second hand with each other.” But Heughan joked that “I’m just gonna go,” when he couldn’t find the right words.

Season 5 will see a lot of medical moments for Claire as Balfe shared, “I get to do lots of different operations this season.” As the session carried on, some other fun topics arose, such as how Jamie would carry on in life had he been able to time travel like Claire. Heughans joked that he would tell Jamie “don’t go near [Claire].” When Zee asked what their favorite words or phrases from the show were, the audience was pleased to learn Balfe’s was “Jesus H. Roosevelt Christ,” while Heughan’s was “Sassenach.” The segment lead into a hilarious sequence of the stars being asked to say some of their character’s own lines in a New York accent. And it was no competition – Caitriona Balfe is leaps and bounds better than the rest, despite strong efforts.

After some more merriment it was time for fan questions which included one woman gifting Balfe with a birthday treat and asking the audience and cast to join in in singing “Happy Birthday” to the actress. Another question asked about the possible appearance of Lallybroch in Season 5, which Balfe said “maybe” in a coy way before Davis interjected and said, “you’ll get to see Adso” who fans know as a cat from the books.

Author Gabaldon also sang the show’s praises. “They’ve done such a fabulous job and I’m so grateful to them,” she said of the Starz series. Don’t miss what’s to come when Outlander returns February 16.