One of the busiest nights for TV comedy ramps up with four new network sitcoms of varying appeal, and I’ll address them in order of preference, starting with my favorite new comedy of the fall season. While the title suggests a fantasy, what makes this comedy so special is how real and warm it feels. In the surprise casting of the year, Walton Goggins trades his usual extravagant villainy (The Shield, Justified) and broadly comic scene-stealing (currently in HBO’s The Righteous Gemstones) for an impressively unmannered and thoroughly endearing portrayal of Wade Felton, a great guy and loving dad who hasn’t been the same since his wife died a year ago. Still living off frozen meals donated by caring neighbors, letting their dogs run amok in the house, “It’s like the Disney Channel version of Grey Gardens,” declares one of Wade’s hilarious group of concerned adult friends, who are committed to pushing Wade back out into the world.

Wade, you see, is a unicorn — “that elusive creature that all single women are looking for,” explains Michelle (Maya Lynne Robinson), who’s married to Ben (Ballers‘ Omar Miller). They, along with snarkier couple Delia (Michaela Watkins) and Forest (Rob Corddry), can see what Wade can’t: that he’s a catch. Goggins plays this offbeat romantic hero with a likably sheepish veneer of earnest decency. He doesn’t want to use his widower status to score pity dates — which, Forest observes, makes him a “regular dumb horse” — and in future episodes, Wade tries in vain to bottle up his anger, then can’t figure out how to stop dating someone with whom he lacks chemistry. “He’s just too nice for this world,” Delia laments. 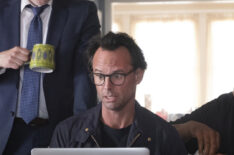 Find out what the new CBS comedy's widower is looking for in a match.

Here’s hoping nice guys finish first, because whether Goggins is playing off the grown-ups or his daughters (played without precocity by Ruby Jay and Makenzie Moss), or trying to read signals on a date after being out of practice so long, this unicorn is comedy magic. Even if this turns out not to be the mass-appeal hit the network needs on Thursdays to fill the void left by The Big Bang Theory, it sets a high new bar for CBS comedy. So many high concepts in one sitcom: a dash of Mr. Holland’s Opus, a sprinkle of Sister Act, overlaid by a heavy helping of Grinch-among-the-yokels. And yet with Bradley Whitford growling majestically as he whips a church choir of Kentucky misfits into shape, this whimsical slice of musical cornpone hits more right notes than you’d expect.

The pilot episode feels more like a 30-minute mini-movie, in which newly widowed — a theme? — Arthur Cochran (Whitford), a disgraced Princeton music professor, is saved from suicidal despair by the clamorous caterwauling of the choir from the Second First Church of the Cumberlands. Subtlety is not in Perfect Harmony‘s songbook, as curmudgeonly Arthur takes an instant disliking to a rival church’s pompous pastor (John Carroll Lynch) and decides to coach the underdog choir. “I’m doing it out of spite,” he grumbles, but this oddball crew only sees the good in Arthur. Until they don’t. Until they do again. Learn more about the show that Camp describes as 'Sister Act' meets 'The Office.'

The writing, though broad, is generally clever, with just the right amount of sass and schmaltz. Whitford is grand, and as his most ardent champion, Pitch Perfect‘s Anna Camp is, well, pitch perfect. The busy pilot ends with a rousing musical showdown, begging the question of whether the show can pull this sort of thing off on a weekly basis without turning into Glee in the boondocks. A shiny hospital and its eager interns provide the backdrop for Patricia Heaton‘s third act, and after spending nearly a decade each on beloved hits Everybody Loves Raymond and The Middle, she has earned enough goodwill to carry her fans past the rougher patches in a genial but otherwise ordinary workplace comedy.

Heaton is a consummate pro, and smartly moves past the naivety of over-eager and perpetually perky Carol Kenney, a retired high-school science teacher who decides to reinvent herself after a divorce and is now an intern on her way to becoming a doctor. The humor in Carol comes not from her pratfalls or her age or her incessant upbeat babbling, which aggravates the humorless chief resident (Ito Aghayere) and her nervously ambitious fellow interns, but in the fact that Heaton is still basically playing the mom role: dispensing advice, always carrying an extra pen and tissues, and proudly using life experience to her advantage. Heaton reveals what drew her to the CBS comedy, her favorite line from 'Everybody Loves Raymond,' and more.

Adding to the show’s appeal: an unexpectedly robust comic performance by Kyle MacLachlan as the hospital’s chipper senior attending, Dr. Frost. Instead of the usual officious hothead, Dr. Frost is friendly and funny, once again proving that laughter, however familiar, can be the best medicine. There’s no doubting the relevance of this comedy, in which Kal Penn plays a disgraced ex-councilman from the New York borough of Queens, hoping to redeem his reputation by coaching a gaggle of quirky immigrants in a citizenship study group. But timeliness doesn’t guarantee hilarity, and Penn’s bland characterization of this jerk isn’t helped by bouncing off the broad cultural stereotypes of his students. The worst is a pair of dimwitted crazy rich Asian siblings glued to their phones, though Diana Maria Riva has some fun moments as a hard-working Dominican whose many jobs in a gig green-card economy become a running gag. She’s the sunniest presence in a cloudy, crowded misfire. Watch My Show: Kal Penn on the 'Funny and Fresh' 'Sunnyside'

The star and executive producer reveals why Sunnyside, Queens is the ideal setting for the new NBC comedy. The Nature of Evil: There’s one new drama hoping to break through on this busy night, and it won’t be easy, especially because it’s a rare attempt by CBS to break out of its by-the-numbers crime-fighting formula, which for this network can be an uphill challenge. And Evil refuses to be pigeonholed. From Robert and Michelle King, the producing couple who triumphed with The Good Wife (and its CBS All Access offshoot The Good Fight) but failed with the cult horror comedy/political satire BrainDead (which I loved), this intensely offbeat hybrid of suspense, psychological mystery and supernatural storytelling is, to put it mildly, original. Which on CBS classifies as a risk. 'Evil' Creators Introduce Us to the CBS Thriller's Own Mulder & Scully

Sure, there’s an unmistakable X-Files vibe to the pairing of a science-minded skeptic — Katja Herbers as forensic psychologist Kristen Bouchard — with faith-based David Acosta (Luke Cage‘s Mike Colter, a Good Wife alum), a priest in training who works for the Catholic Church as an assessor of inexplicable phenomena. Their sidekick is pragmatic techie Ben Shakir (Aasif Mandvi), who lives to debunk. As they investigate the possible demonic possession of a serial killer the first week, then move on to the seemingly miraculous resurrection of a teenage soccer player after being declared dead for two hours, their debates between the logical and the mystical add provocative layers to the weekly procedural format.

So where does evil come in? Enter that terrific character actor Michael Emerson (Lost, Person of Interest) as the malevolent Leland Townsend, a manipulative misanthrope who delights in bedeviling Kristen in the courtroom and beyond. Stealing every scene with cackling menace and delight, Leland seems to know way too much about Kristen and her four rambunctious daughters, and even more about her terrifyingly vivid horror-movie-style night terrors, in which she’s taunted and molested by a monstrous but droll demon who calls himself George.

David has a theory about Leland, that this psychopath is an influencer (or “connector”) who may appear normal — which he doesn’t — but whose “real pursuit is evil, encouraging others to do evil, for the sheer pleasure of it.” He later accuses Leland of wanting to “kill hope.” What does this even mean? And what if anything does it have to do with the ghoul tormenting Kristen in her graphic waking nightmares? And why is her (unseen) husband off climbing mountains in Nepal while all this is going on, leaving her alone with four impressionable girls? These are mysteries likely to play out for as long as Evil exists.

I’m intrigued, if not entirely convinced, but mostly fascinated that CBS is even taking this bizarre swing at all. Good for them.