It’s a Saturday in early spring on the warehouse-like Chicago Fire set, and emergency vehicles are filling the bay of Firehouse 51. Along with the usual truck and ambulance, a police car straight from Chicago P.D. has arrived to join the fleet. On Wednesday, April 24, another act of terror takes over the hospital when an active shooter holds medical staff hostage.

Chicago Fire‘s Taylor Kinney, Chicago Med‘s Yaya DaCosta, and Chicago P.D.‘s Jason Beghe are particularly happy to share this experience. Their casts have gotten to know one another through the many intersecting storylines on the sister shows, especially since, as of this season, all three air on the same night.

“It works!” says Wolf of Wednesday’s #OneChicago consolidation. “From a writing standpoint, it’s great, and it makes the shows more seamless.” Even Beghe, who describes himself as “a solitary man, much like [my] character,” flawed Intelligence chief Hank Voight, finds the crossovers more “inclusion than intrusion. It’s realistic,” he says, noting, “The only territory is Chicago.”

The cast intermingling onscreen — there are 27 regular players among the three dramas — has also extended to a family feel offscreen. Female cast and crew have a book club, and when an ad hoc band from Fire recently performed at a local restaurant, talent from all three casts came in support.

This camaraderie is demonstrated during the photo shoot when Kinney is told to move closer to Beghe, and he playfully wraps his arms around the startled but amenable actor.

“Since I started in the 2012 pilot,” says Kinney, who plays fearless firefighter Lt. Kelly Severide, “I’ve wanted to help create an atmosphere that was welcoming. We want to entertain people and, while we do it, have a good time and all get along.”

Here, we highlight everything you need to know about Fire, Med, and P.D.‘s Windy City world. A Is for Ambo

Life can be tough for paramedics on the ambo — Chicago Fire Department slang for ambulance. Fire‘s Ambulance 61 pays tribute to paramedic Leslie Shay (Lauren German) on the driver’s front door, where her name, birthday, and death date (an on-the-job fatality at the end of Season 2) are inscribed.

B Is for Bad Bosses The most dangerous: P.D.’s inept, double-dealing police superintendent Brian Kelton (John C. McGinley), whose public boasting about a murder witness led the woman to flee town and resulted in the killer going free.

C Is for Crossovers

Interaction among the three dramas has become de rigueur, made even easier now that they occupy a three-hour block.

“It’s like your cousins come over for a holiday,” says Med‘s Nick Gehlfuss (Dr. Will Halstead). One city. One family. One night.

But even family members aren’t all the same. “Each show has a different tone,” adds Kinney. “P.D. has heavier content and it’s more subdued, while the Med set is all about medical exposition and jargon. They shoot inside a lot more than we do.”

D Is for Diversity

Each series embodies its host city’s blend of ethnicities, religions, and sexual orientations. DaCosta, who is of Brazilian and African-American descent, calls it “refreshing” to be part of a project that leans in to “the shift toward TV content that reflects society.” Much of Med‘s action takes place in the Emergency Department — and sometimes the D. itself turns into an E., as when a car smashed into the front bay, nearly killing a hospital worker.

Lots of Fire and P.D. folks pass through the E.D. doors, too, whether bringing in patients or needing care themselves.

F Is for Firehouse 51

The home of Engine 51, Truck 81, Rescue Squad 3, and Ambulance 61, the beloved house — with its broken sofa, old TV, bunk beds, and dog hair — is a sanctuary for the squabbling, teasing, raucous Chicago Fire crew. G Is for Good Bosses

Yep, #OneChicago has them as well.

Sharon Goodwin (S. Epatha Merkerson), Med‘s ethical chief of services, usually sides with her people rather than the hospital’s board. P.D.‘s Voight (Beghe) is rough around the edges but will do anything for his squad. And Kinney says he “loves the respect” between his Severide and Fire‘s incorruptible Chief Boden.

H Is for Heroes

“When I think of heroes, I think of our trade,” Kinney says. “These shows all feature high-stress, high-risk professions.” Fire and P.D. don’t shy away from on-the-job danger. Fire has lost five series regulars and P.D. one to debilitating injury or death.

I Is for Intelligence Unit

“They’re a group of super-elite crime-solvers, assigned to the toughest crimes out there,” says Beghe of the P.D. team, known for often having a loose interpretation of rules and regulations. The 'P.D.' newbie talks what's to come for Upton and Ruzek and off-camera pranks with co-star Patrick John Flueger.

J Is for Jargon

When it comes to tongue-twisting terms, nothing beats the medical profession. Pity the Med actor trying to speak the words “methylprednisolone” or “mass spectrometry” quickly and naturally in a sentence.

“There is inevitably a moment in each episode where someone has to say a new word, and they make a fool out of themselves,” says Gehlfuss. “We all love that.” K Is for Kitchen

Being a firefighter is not just about putting out flames and rescuing folks. It’s also about cooking up enough tasty grub to keep your shiftmates happy. Woe betide bad cooks — especially when bragging rights for the annual Firehouse 51 Chili Cook-Off are at stake.

L Is for Loyalty

Rule No. 1: Always protect your brothers and sisters on the job. (See P.D.‘s Voight, who has spurned regulations, lied, and taken the fall to protect one of his team.)

Rule No. 2: If one of your colleagues takes deliberate actions that could hurt the profession or the city, go ahead and ignore Rule No. 1. M Is for Molly’s

The bar co-owned by firefighters Christopher Herrmann (David Eigenberg) and Brian “Otis” Zvonecek (Yuri Sardarov) may have its occasional money problems, but the joint is a much-valued hangout on all three dramas.

N Is for Nurses

Med‘s angels of the E.D. get plenty of love and respect. “We really show the importance of nurses and how doctors rely on them,” says DaCosta. “Playing a nurse is rewarding because it shines a light on the amazing work that they do.” O Is for Office Romances

The dedicated and good-looking first responders can’t keep from falling for each other — or breaking up.

“Choi and April are still dancing,” DaCosta says. “It’s unclear whether they’ll get together or become friends.” Why Olinsky Was Killed off in the 'Chicago P.D.' Season 5 Finale

P Is for PTSD

Fire‘s Lieutenant Casey and Med‘s Dr. Halstead exhibited anger and anxiety after each was nearly shot in the head while on duty. P.D.‘s Det. Jay Halstead (Jesse Lee Soffer) suffered insomnia and nightmares from his time in Afghanistan.

Q Is for Questioning Authority

If you’re a Chicago character, odds are you’ve tangled with superiors. Among them: Med‘s Dr. Halstead, who has ignored protocols to save fatally ill patients, jeopardizing his license; Fire‘s Severide, who once lost his lieutenant stripes for butting heads with higher-ups; and, of course, P.D.‘s Voight, the “my way” cop who only cooperates with bosses if it will help his team.

R Is for Rescues

For nail-biting drama, call in the CFD. Whether it’s pulling passengers out of a chopper teetering over a roof ledge or saving a coworker trapped in a collapsed garage, Fire‘s rescue sequences are never less than heart-pounding. S Is for Surgeons

T Is for Truck and Squad

Two of the major units in the firehouse. Lieutenant Herrmann is in charge of the fire truck, while Lieutenant Severide heads up the squad specializing in rescue operations and scene clean-ups. 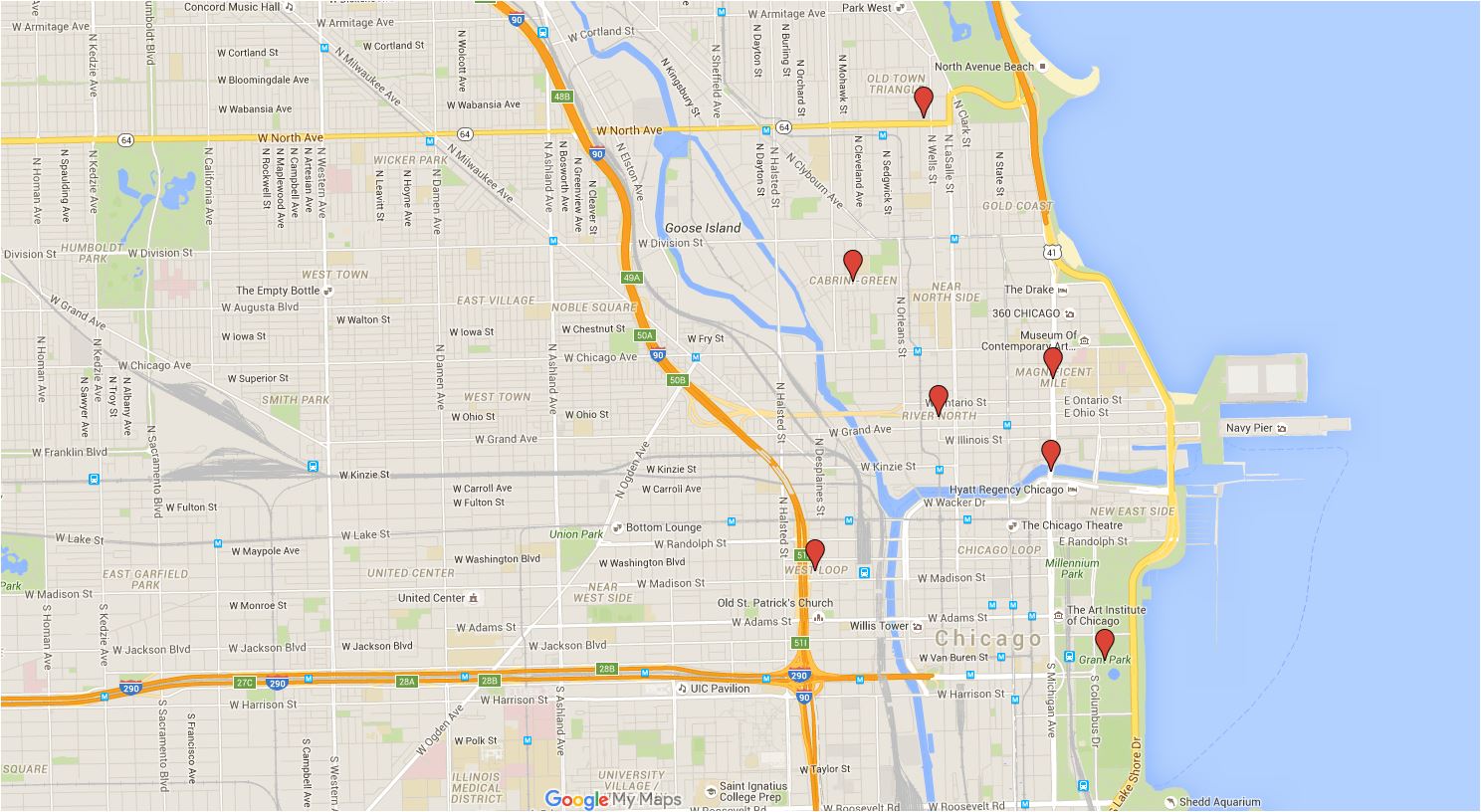 Here's where to find some of the Windy City's most iconic TV locales.

U Is for Undercover Ops

This season, P.D.‘s Intelligence detectives Upton and Burgess played bigtime illegal-gun buyers. Med‘s Dr. Halstead agreed to bug a mobster, who happened to be a patient, at the behest of his cop brother, Jay. And on Fire, Joe Cruz (Joe Minoso) reluctantly volunteered to snoop on one of his own accused of evidence theft.

V Is for Veterans

Semper Fi! As in real life, many first responders are veterans and reservists. Med‘s Dr. Choi was a Navy flight surgeon; P.D.’s Detective Halstead is a former Ranger; and Lt. Jeff Clarke (Jeff Hephner), who moved from Fire to Med, was an Iraq War vet. W Is for Wolf, Dick

The legendary producer (Law & Order, FBI) is the mastermind behind the franchise. When shooting the pilot for Chicago Fire in 2012, he says, “I looked at the beautiful city and realized that Fire could be the starting point for another brand of shows.”

X Is for X-Rated

Actually, despite all those office hookups, the love scenes are pretty tame. We wouldn’t mind a few more shirtless interludes!

Y Is for You’ve Got to Be Kidd-ing

Paramedic Dawson had a short stint as a firefighter, but Stella Kidd is Fire‘s only full-time female firefighter. She loves the work, no matter how tough or dirty, and was recognized for both her skills and her tenacity in a rescue. Z Is for Zumba

Some firefighters moonlight with security gigs, but not Squad’s Cruz. In his off hours, he runs the best Zumba class, according to Yelp!

This is adapted from TV Guide Magazine’s latest cover story. For more from our conversation with the showrunners and cast of One Chicago, pick up the issue, on newsstands now.