When Supernatural Season 12 ended, it seemed that the show’s resident angel, Castiel (Misha Collins), was killed off.

“We say when we write these things that you have to go where the story takes you,” executive producer Robert Singer said during the show’s Comic-Con panel. “We thought perhaps Castiel’s time had come.”

Collins then “crashed” the panel, and promised he would be back. “They had to take the story where it went; but I’m not going away,” Collins said. However, details of how he’ll return are still a secret. Fans were treated to the surprise prior to the show's Hall H panel.

Sam (Jared Padalecki) and Dean (Jensen Ackles) will have their hands full in the meantime dealing with Lucifer’s (Mark Pellegrino) son, Jack (Alexander Calvert). “This entity, in Dean’s mind, has to go,” Ackles said. “But because it’s technically half-human, the very optimistic Sam [wants to save him]…we have two very different ideas of how to handle it.”

Given Jack’s lineage, “I don’t know why anyone would want to see how this works out,” Ackles pointed out. “I have an idea: let’s shoot it in the face.”

“Sam’s like, that might piss it off,” Padalecki added. “We’ve danced around it a couple of times, but not to this degree; nature versus nurture.” 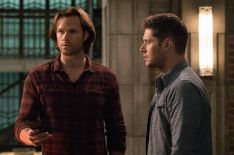 What on Earth (or in Hell?) could be in store for the Winchesters' next go-round?

The brothers will also differ on how to approach their M.I.A. mother Mary (Samantha Smith), who is trapped in an alternate universe with Lucifer.

“Dean is pretty sure that’s curtain for Mom,” Singer said. “Sam thinks she went through alive; he’s holding on hope…Sam’s mission in the beginning part of Season 13 is let’s find Mom.”

But don’t worry, per Singer: “Spoiler alert: Mom is not dead.”

And other familiar faces will return to the show in Season 13.

“I think we have some cool characters coming back both in our world and our apocalypse world,” executive producer Andrew Dabb teased. Among the early list? Missouri Mosley (Loretta Devine) will be back; plus Supernatural vets Jody Mills (Kim Rhodes), Sheriff Donna Hanscum (Briana Buckmaster), Claire Novak (Kathryn Newton), Alex Jones (Katherine Ramdeen), and newbie Patience Turner (Clark Backo) are officially part of the upcoming backdoor pilot of Wayward Sisters.