In the Alaskan Bush People episode “One Brown Down” (Feb. 1), the Browns cross open water and face insurmountable odds as they search for the final pieces to accomplish their off the grid dream. Noah misses his girl, while Bam surprises Billy and Ami with an announcement.

Good Lord, what a lousy episode. It’s like something that Kenny shoveled out of Sabrina’s pen. Let’s hold our noses, close our eyes and power through this.

Matt is making coffee on the Integrity, but the waves are knocking stuff all around in the kitchen. Matt’s solution is to take some rope and tie the pot to the stove. Now, I don’t get a good look at the rope’s material, but I do know that putting rope near the flame from a gas burner is not advised. Even if Matt could secure the pot well enough, he can’t stop boiling water from splashing all over the place. I hope they saved the severe scalding scene for the Lost Footage episode. I don’t know why Matt just didn’t stop at one of several Brownton Abbey-area Starbucks before they left.

Time for breakfast and gun maintenance. Every family should have a rule about no firearms at the breakfast table. You may recall the stupid scene from a past season in which Gabe is pouring chicken grease into his rifle to lubricate the parts. Now we have Bear pouring bacon grease into his pistol.

Matt likes dipping his chips into gravy or grease, something I’d love to try if my blood weren’t already 75 percent cholesterol. Birdy makes “dessert eggs” by pouring sugar on them.

Billy says that it’s time to stop all this lollygagging around with guns and sugar. Billy says that they can’t be late for the seaplane tow, because Seaplane Guy has only been waiting three days and can’t wait one more damn second or he’ll have to call someone from even farther away to tow his plane. But first, It’s time to get fuel, rustle up some meat and get some wind turbine parts. Then Billy starts spinning yarns about the half-century or so that the Browns spent at sea. “It sounds crazy to say this, but Ami went almost a year and a half without setting foot on shore.” Yes, that does sound crazy.

The Integrity stops at Whale Pass for fuel, and it’s Bam and Bear’s job to fetch gas while Matt and Birdy go on a deer hunt. The hunt is uneventful. Birdy gets a doe and a fawn in her sights, but they’re not going to kill them, because, according to Matt, “It had a baby, and nobody wants to kill Bambi’s mom.” Well, at least not on TV. They eventually find a buck, and after some heavily edited chaos, Matt blasts the buck. 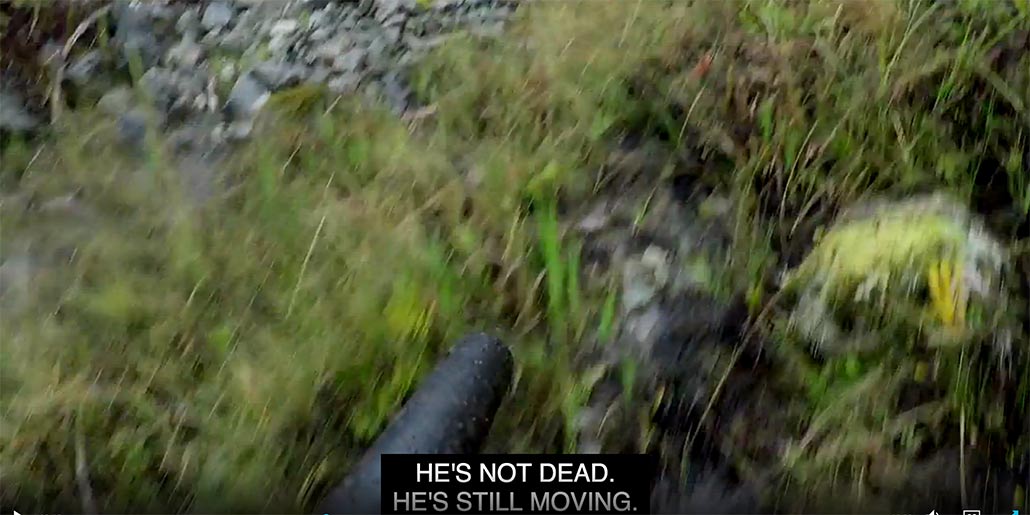 I love how they have this shotgun camera, but they never use it to show the deer kill, because this show is bad and fake. Matt pretends to blast the pre-killed deer as it lies on the ground, and he and Birdy start gutting the thing. It seems Matt finally learned what a deer liver looks like. Good on him.

Bam and Bear arrive at Last Chance Gas & Store, which has the weirdest business hours and the least informative signage.

Bam and Bear arrive during the off hours, but that’s not going to stop them from filling up. It’s apparently Bush Business practice to take whatever you want and leave a bunch of cash behind. “You leave the money, you get the gas. It’s a Bush town. Piece of cake,” Bear says. Leave the gun. Take the cannoli. But if the Browns are getting as much gas as the show leads us to believe, they should be dropping a few hundred dollars there. And what about diesel? Doesn’t the boat need diesel? I just wasted a good 30 minutes trying to locate a gas station in Whale Pass on a map. How’s your day going?

After the gas is gotten and the meat is rustled up, Billy corners Bam for an uncomfortable father-son chat. Billy says that Bam seems preoccupied, and Bam doesn’t give him a straight answer. Billy says he can see things that other family members can’t, mostly likely due to all the seizures. 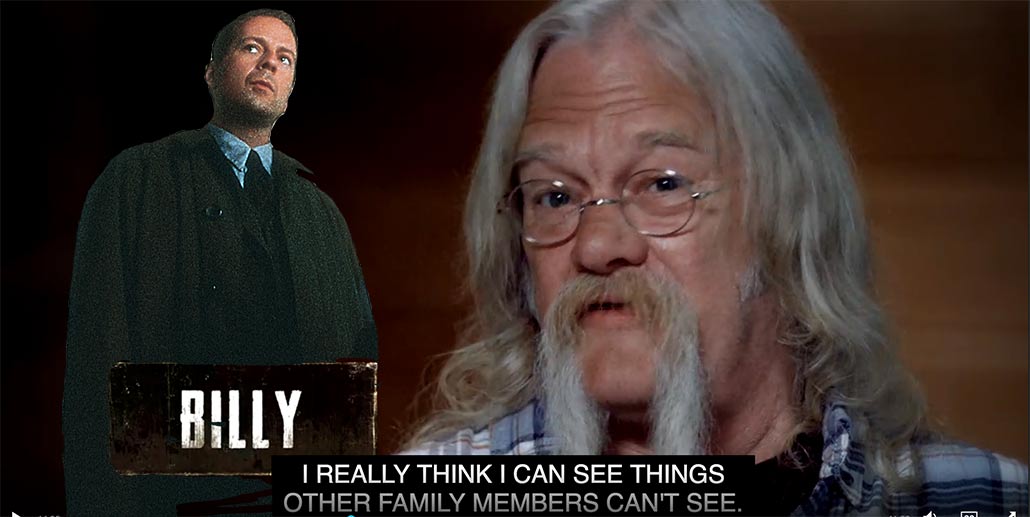 Now it’s time to follow the lead on some wind turbine parts that someone has just sitting around unused and is willing to give away. This is where we meet “Hat-Trick” Connie and her boyfriend Mike. “She has known my parents, like, forever,” Matt says of Connie. I bet Connie could tell some stories. I wonder how much money Billy owes her and if this appearance on TV is payback. Mike picks up Matt, Bam and Noah with his truck, and then starts going into his Naukati Chamber of Commerce spiel about the town being “Blueberry Central.”

Mike tells us that Connie has 60 gallons of blueberry wine underneath her bed. Sounds uncomfortable, but whatever. Mike tells the boys that he doesn’t want to mess with bears, because they’re like “the clowns of the woods, you know?”

You can go deep into the Alaskan Bush, you still can’t avoid the pain in the ass that is road construction. The road is closed (Wouldn’t Mike already know this?) and they have to wait for the pilot car to guide them through the construction mess.

They eventually arrive at Connie’s house. Connie is an affable lady who must dye her hair with that blueberry wine. She wastes no time in asking the boys why they all don’t have careers and aren’t married with six kids each. Well, in their defense, they have been on a national cable TV series for six-ish seasons. That should count for something. Connie says they need to find a woman who can cook, who can skin a deer, and… 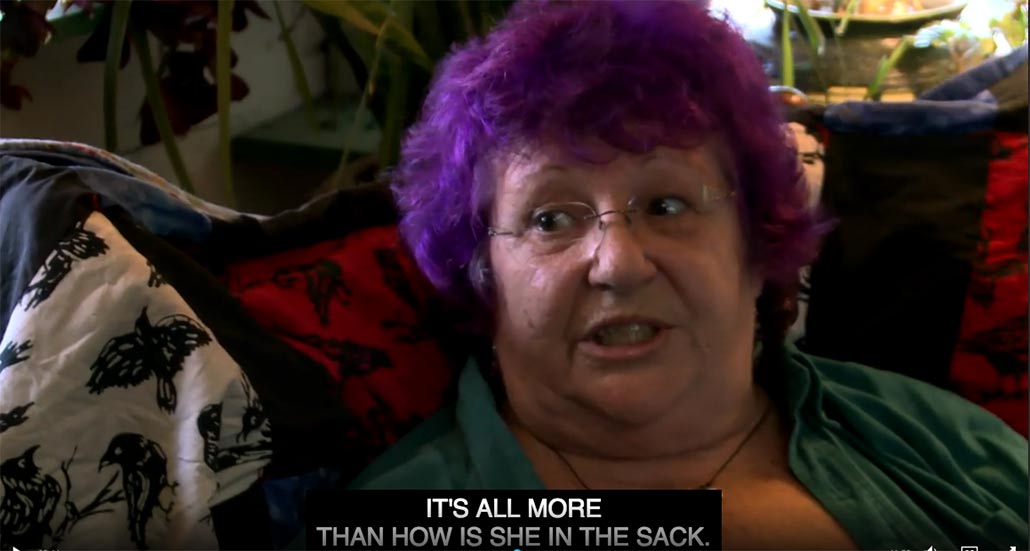 Oh, Connie, I bet you were a demon in the sack back in the day!

I love Connie’s dog and wish it got more screen time. 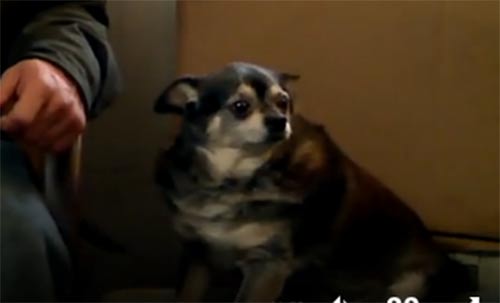 But time’s a wastin’ and the boys had better get down to business. Of course, Mike just happens to have an old but intact wind generator that he didn’t need and dismantled and stashed under a tree. I could see a whole special ABP episode devoted to “Things the Browns Improbably Got for Free.”

It’s time once again for sentimental journeys with Billy and Ami. This time, they go to Ami’s old favorite fishing spot, where she casts a line like she’s never picked up a rod and reel before. She snags some weeds. So it’s salad for dinner, then.

The Browns should maybe think of moseying along since Seaplane Guy is going to die soon and Paul is going to scuttle the Rental Skiff if they’re not there in time. The Browns have to get the plane in Thorne Bay and then tow it 45 miles across the strait to Ketchikan, also known as Alaska’s Smelly Armpit. What a hellhole, that Ketchikan. The Browns actually made the city more beautiful by trashing their apartment there.

They’re en route to Thorne Bay in the darkness when Billy loses all electrical power to the boat. Boat Malfunction! 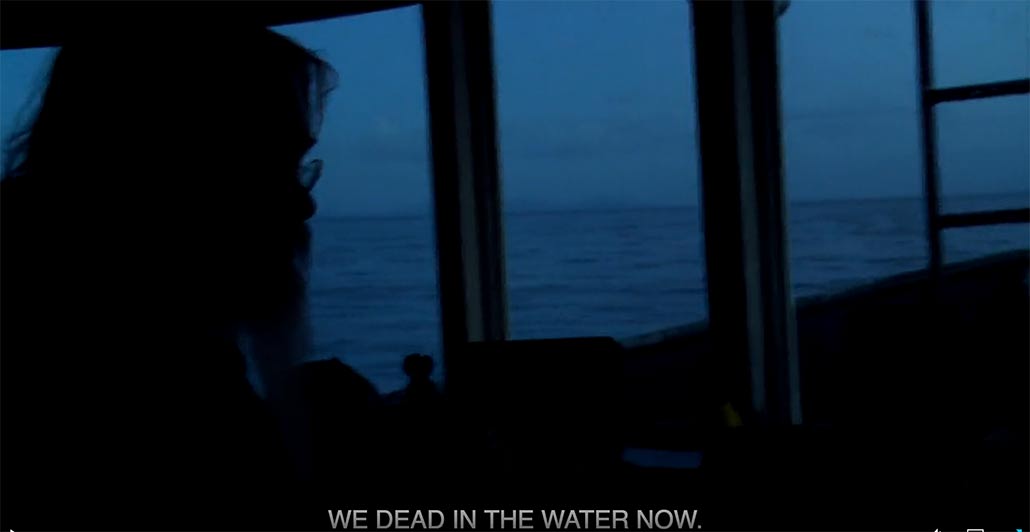 You know, “Dead in the Water” would make a great title for this episode! I wonder why they haven’t used it before. This is one of the more unnecessary cases of Unnecessary Drama in the entire series. The power outage has something to do with the battery terminals Noah futzed with in the last episode. He fixes it quickly, and I feel my soul trying to flee my body.

They finally get to Seaplane Guy, who we’re led to believe has been sitting in his plane for three days waiting for the Browns to arrive. We’re led to believe this, because the producers think we’re idiots. (They’re only half right.) Seaplane Guy could’ve paddled the thing to Ketchikan all by himself in the time it took the Browns to get there. The tow job is boring, and I feel let down more than usual. Screw this show. 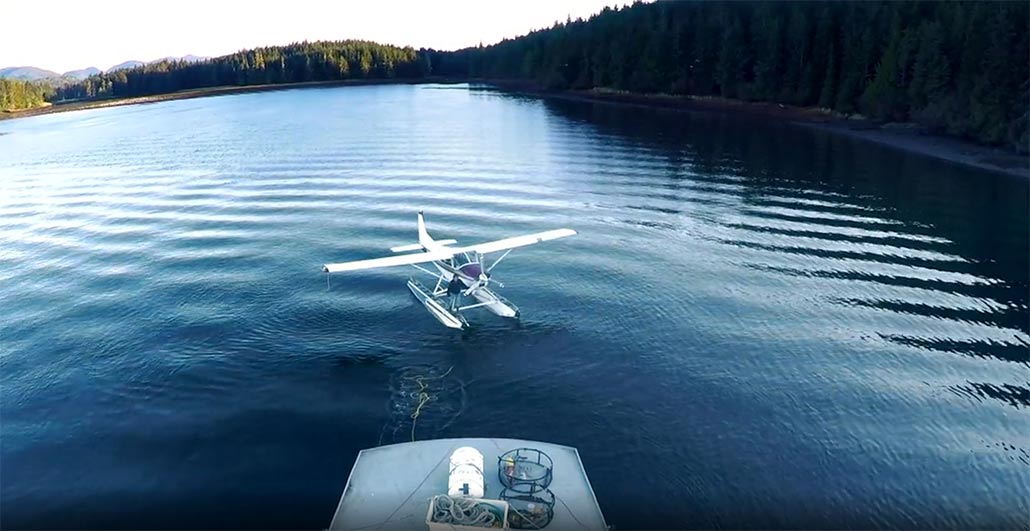 The Browns stop in Ketchikan, a place the Browns “hold close to their hearts” (HAHAHAHAHAHA!), to make repairs on the Integrity. They’re returning to the place they both literally and figuratively trashed, and where Billy sunk his boat the Opal. Here, let me show you this for the 34th time, because I will never get sick of reading it:

I love that story so much, I read it to my children every night at bedtime.

And now, the moment of truth for Bam. He comes to deliver the news to his folks that there’s something he’s gotta do, and he’s gotta go down to the Lower 48 to do it. And there goes Ami with the crying. Billy’s Seizure Power allows him to peer into the future, and he says that he saw this coming. 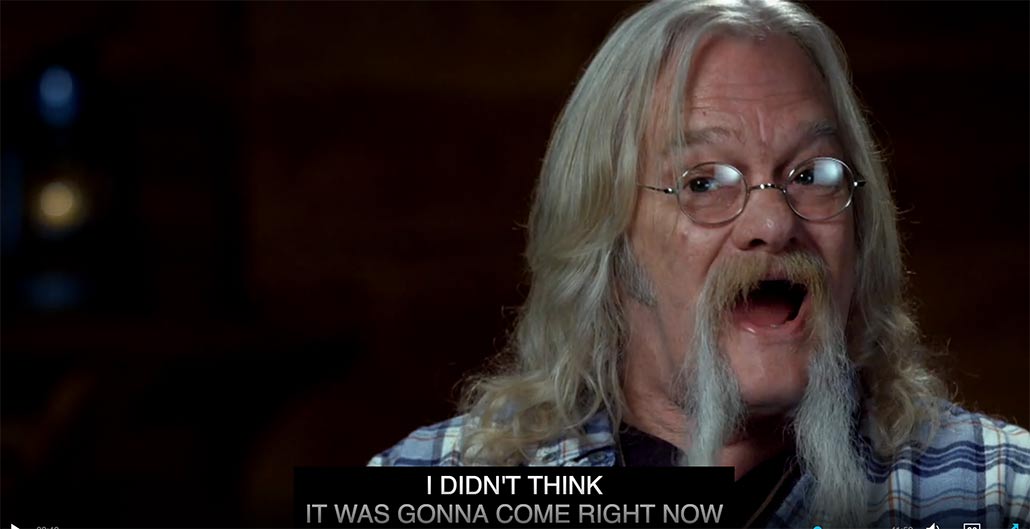 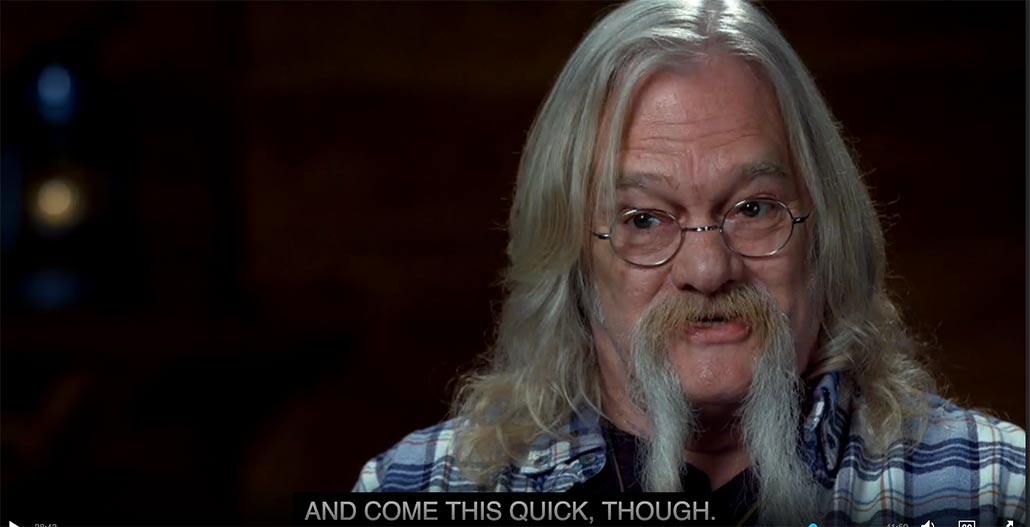 I will let you think what you will about that.

The interstitial gives us Bear, Rainy and Birdy roasting s’mores and reminiscing about those halcyon days when they they didn’t have the actual supplies and ingredients to make s’mores. Back then, they just dumped sugar on stuff, pretty much like they still do today.

Now it’s time for Bam to say goodbye and “more” and all that junk. It’s going to be hard on Bam, because: 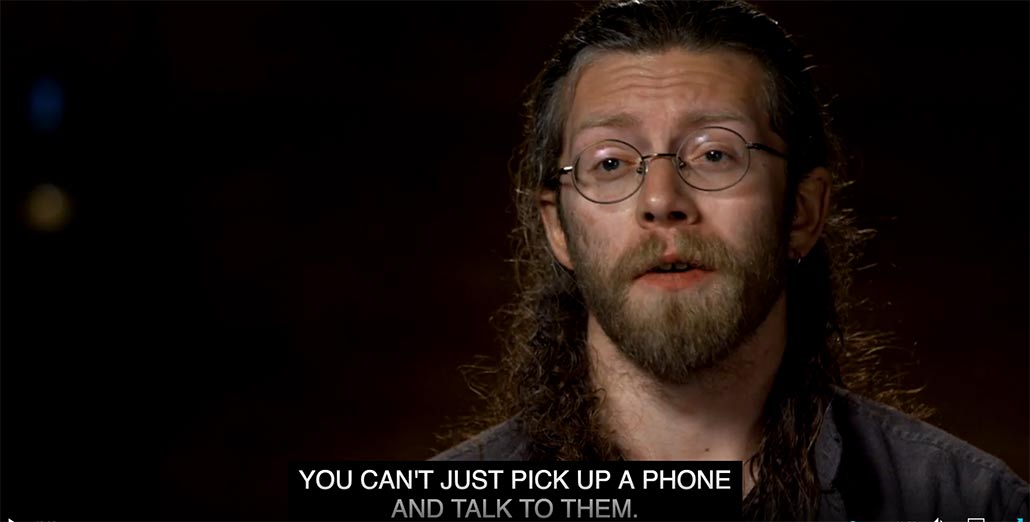 No, Bam doesn’t have a smart phone or a smart watch and neither do any other members of his family. iPhone? What is that? Something you talk into with your eyes? Sorcery!

This development is further proof that the producers of this show hate me, and rightfully so. They did away with the mighty and one true Skiff last season, and now they’re doing away with the only Brown family member I can tolerate. But they will soon learn that this weary Bush-bashing ol’ bastard still has a lot of fight left in him.

Peace out, Bam. You are in a better place. 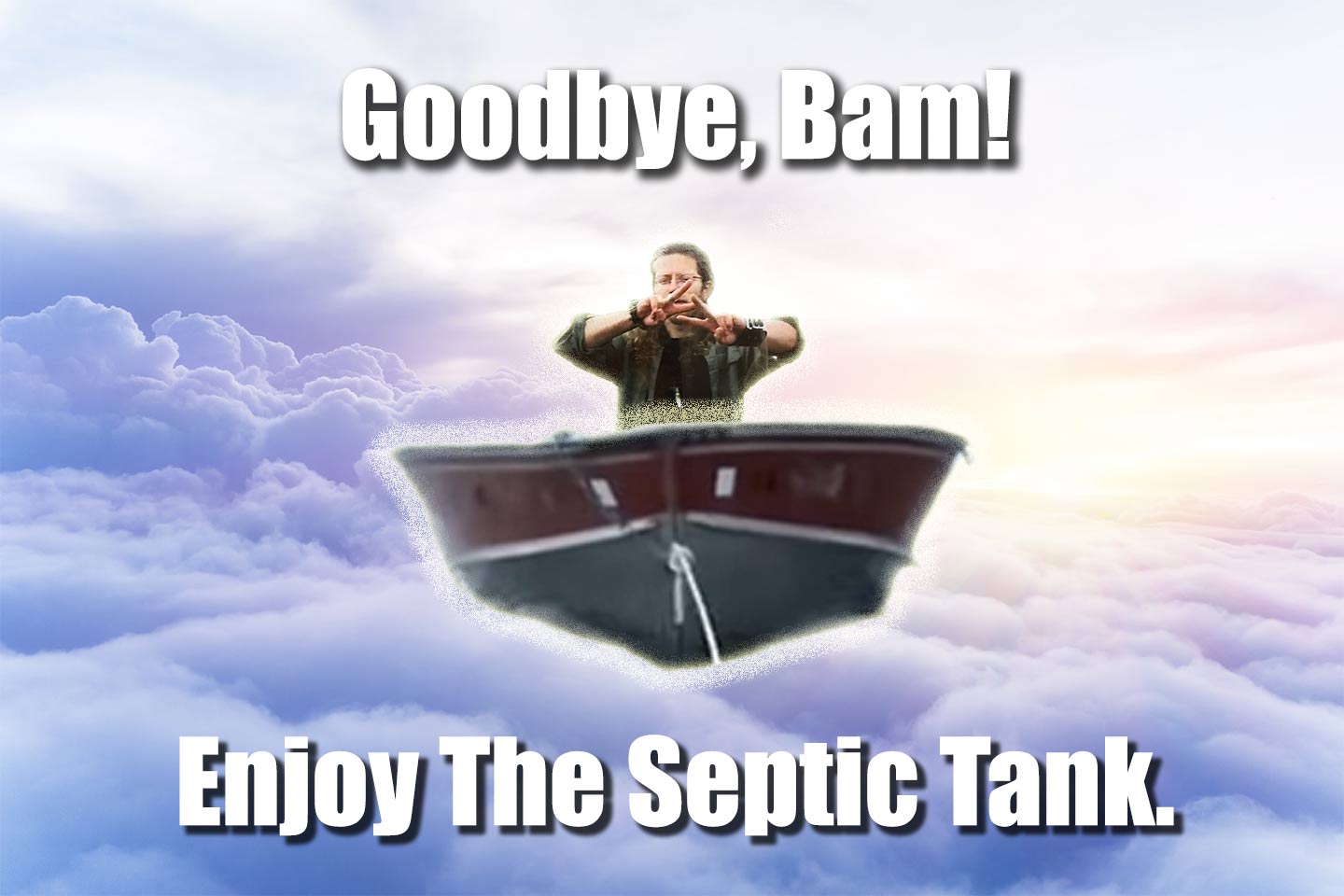