In Discovery Channel’s Alaskan Bush People episode “Dead in the Water” (Jan. 25), the Browns face turbulent weather as they try to accomplish a haul to Port Alexander at the very edge of Southeast Alaska and the open ocean. The Integrity shows its age as problems arise and the Browns are left stranded in the middle of the water.

We open with a pulse-pounding, jaw-dropping, high-octane scene of the Brown kids picking blueberries. And here is Gabe’s only contribution to this episode:

Hey, did you know Bear likes to punch stuff besides fish? It’s true! You cannot keep Bear from punching stuff! He’ll punch this wall, he’ll punch that wall. He’ll punch dirt, snow, water, ice, spoiled milk — any of that stuff. And if he’s not punching that stuff, you damn well know he’s thinking about punching it in the very near future. 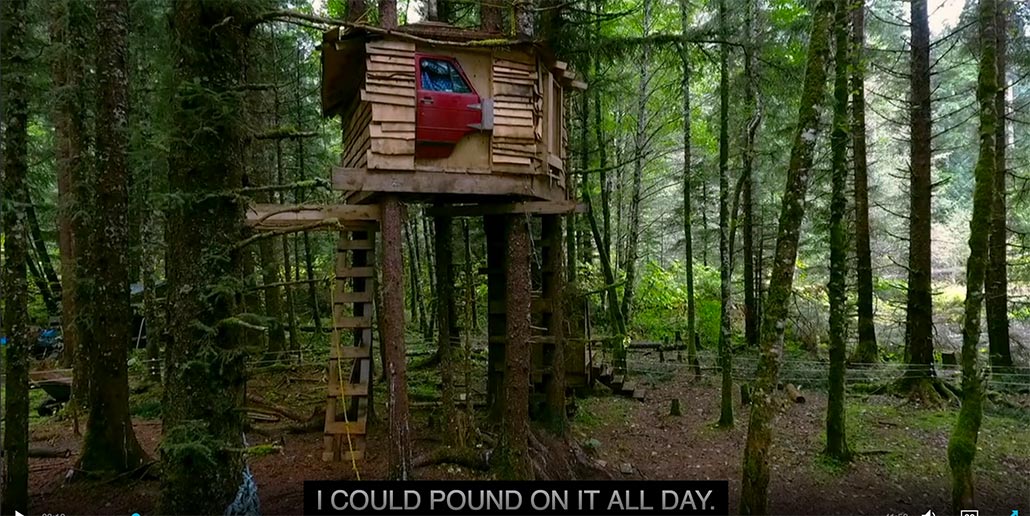 Somewhere on the outskirts of Brownton Abbey, Billy discovers Bam whacking away at the Bush. Bam explains to Billy that he wants to get away from them all and build his own place nearby, so he’s going to start by clearing some weeds and stuff. Bam has plans to build what sounds like a McMansion, and Billy is skeptical, mostly because there’s a big tree stump right in the middle of Bam’s plot, and Bear would have to do a lot of punching to sufficiently grind down that stump. (Building a house right into a tree didn’t stop the Browns last time.) Bam senses negativity, or maybe he finally realizes what it’s like to be told that your ideas are impossible and stupid. Bam is looking for an exit strategy. He desperately wants to be written out of this show. This is why I am Team Bam all the way.

Matt is busy butchering the deer that he didn’t really shoot, and he makes it evident that his next trip should be to the asylum. 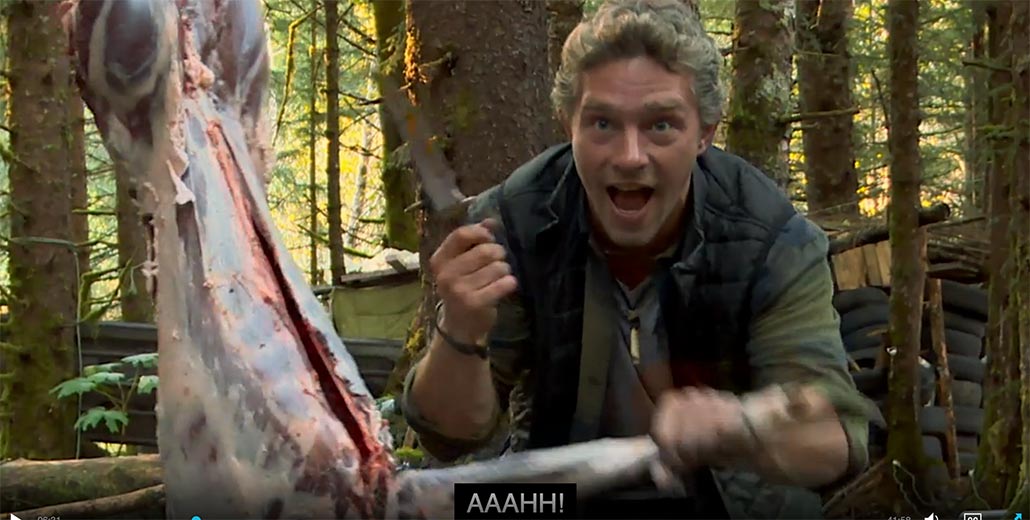 There’s a visitor approaching the shores of Brownton Abbey. It’s Paul “Haulin’ Paulie” Weltzin of Sea Level Transport, and he’s taken the six-hour round trip from Hoonah to visit Billy and offer him the opportunity to own the Rental Skiff. Paul has two jobs: deliver two septic tanks to Port Alexander and tow his friend’s broken down floatplane to a repair shop in Thorne Bay. If Billy can complete these fake jobs, he can keep that nice new Skiff that Paul bought but was never going to use but is vastly inferior to the previous Skiff that possessed godlike powers. Billy accepts this offer, because otherwise this episode would be over in 10 minutes. Yet again someone dumps a classic too-good-to-be-true deal in Billy’s lap.

I did some shopping around, but was unable to put a definite sticker price on a SeaArk skiff with two Mercury Marine FourStroke motors. (DIGRESSION! Fond du Lac sucks!) A commenter on Facebook put the whole Rental Skiff package at around $20,000 new. The SeaArk skiff hull alone runs about $3,000 on the low end. A new Mercury 50hp motor runs about $5,700. The smaller Mercury — let’s say 3.5hp — is about $950 new. So we’re talking about a $10,000 boat, conservatively estimated, and that doesn’t factor in the higher price of goods in Alaska. There’s no consistent logic of Bush Math or Bush Economics, so trying to figure out the Browns’ profit margins is a fool’s errand anyway. I’m just pissed they didn’t get Bear the SeaArk Extreme BXT220 instead.

This is going to be the Brown’s longest and most dangerous fake haul yet. I wonder if Billy confirmed that those were empty septic tanks, because that’s something I’d definitely want to know ahead of time.

And I’d also like to know why a guy with a bum floatplane in Thorne Bay would wait three days for a boat that’s 300 miles away when there are lots of boats already in Thorne Bay that could do this faster and easier. Hell, there’s even a seaplane base at the Port at Thorne Bay. Even though its website has been Coming Soon since 1997, it must have the ability to tow a floatplane around. 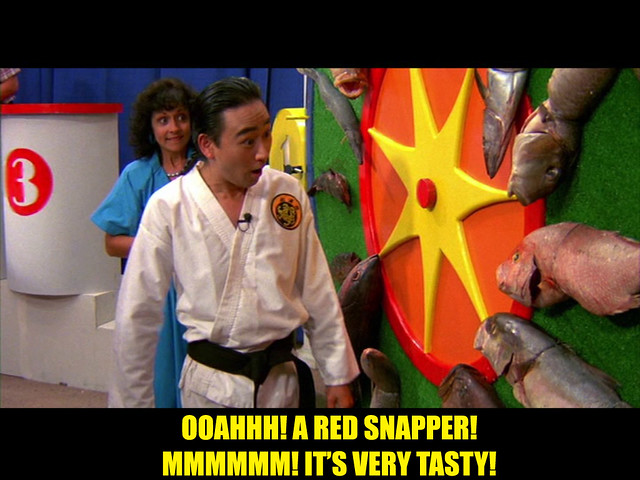 The Browns have so many good memories of P.O.W. (Their memories of M.I.A. aren’t quite as good.) Back in the day, Billy caught so many big fish in P.O.W. 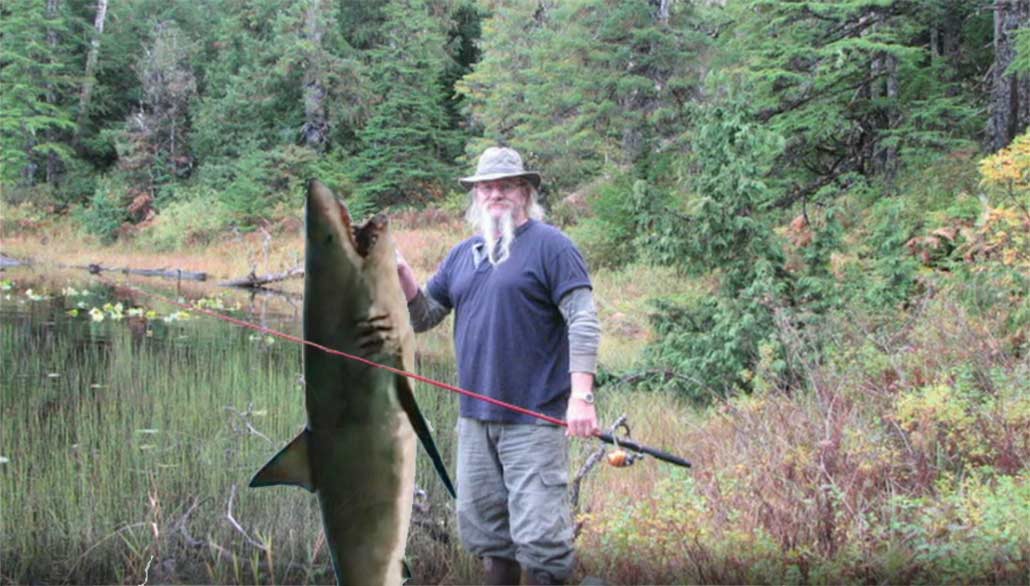 The journey will take a week to complete, so the Browns need a cow sitter. Obviously, this job requires the services of…freakin’ KENNY! 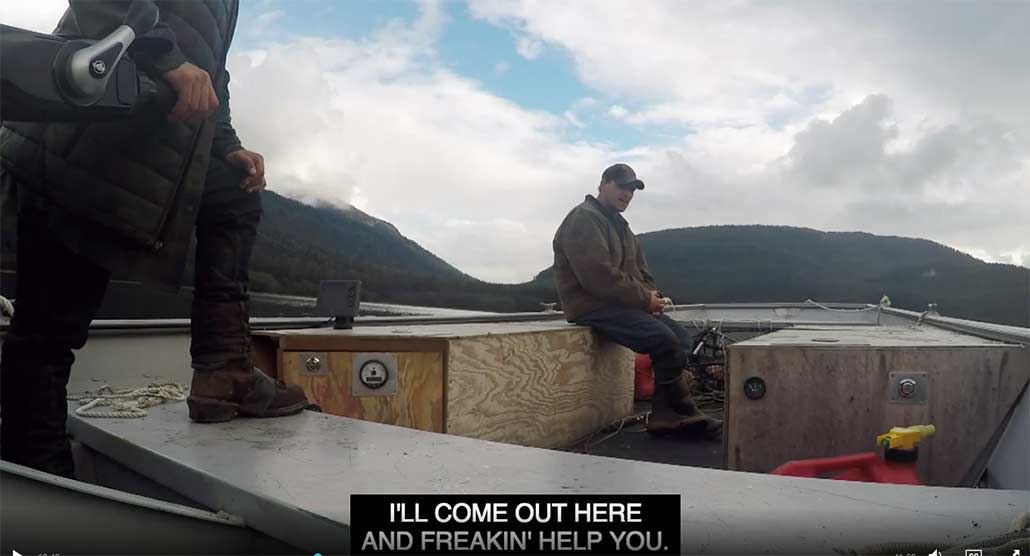 Kenny will be taking care of Sabrina while the entire Brown family goes off to die at sea. Birdy instructs Kenny on the milking process, which only takes 40 freakin’ minutes? Birdy is concerned that Kenny doesn’t understand the magnitude of the responsibility that he’s about to undertake. I’m just concerned that the show’s writers haven’t been introducing enough sexual innuendo into the scripts this season. 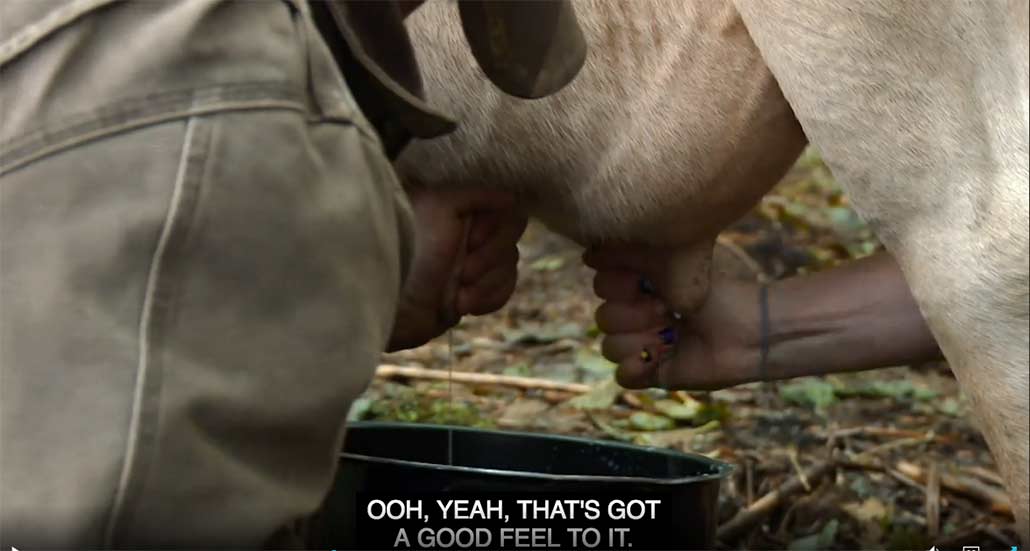 Why doesn’t Birdy just stay behind and milk the damn cow herself? There are more than enough Browns on the boat. Shouldn’t at least one remain at home to mourn for the others? And is Kenny going to stay at Brownton Abbey for an entire week, or is he going to make the six-hour round trip commute from Hoonah? And who’s going to watch the dump while Kenny’s gone? We need eight ABP spinoffs or two standalone movies to explain all of these backstories! 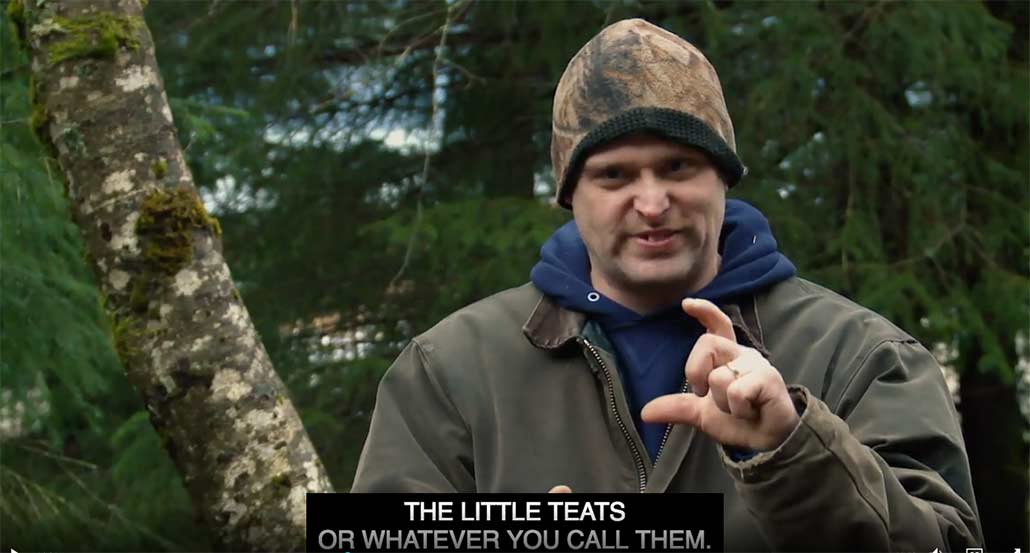 Billy is going to bring the whole family along to meet their doom, and he’s “really kind of tickled about that in itself.” The Integrity arrives in Hoonah to pick up the two 350-pound septic tanks. But there’s a BLOW coming! It’s decided that they’re going to leave the Rental Skiff docked safely in Hoonah, since they don’t want to destroy the very thing that they’re setting out to acquire in the first place. That would be ironic as hell. If there’s an emergency, they can use the canoe as a lifeboat. Remember: Women, children and Noah first.

Then Matt says his final farewell to Hoonah as the Integrity pushes off the dock.

It doesn’t take long before the Browns encounter a BOAT MALFUNCTION! Smoke is coming out of the bow. “Oh, dadgum!” says Billy. “Smoke on the boat is not a joke.” There are some frayed electrical wires that are smoldering, and the terminals on the battery are corroded or fried or something. Noah does some Noah stuff and reconnects the battery. They’re good to go, but Billy is still very apprehentious [sic] about this. I’m apprehentious about seeing Noah’s dragon-eating-a-phallus tattoo again. 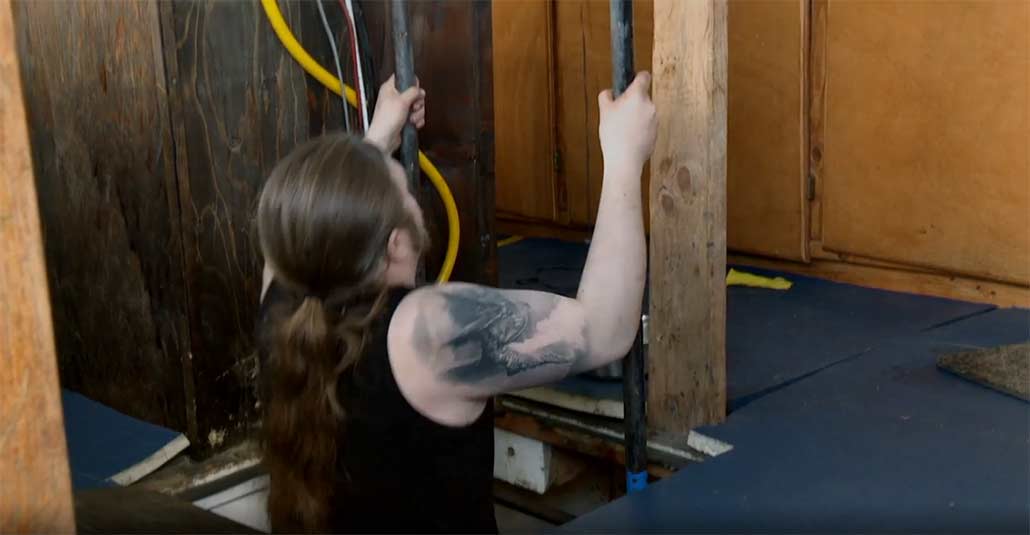 Back at Brownton Abbey, Kenny is shoveling manure in the most symbolic Alaskan Bush People scene ever. 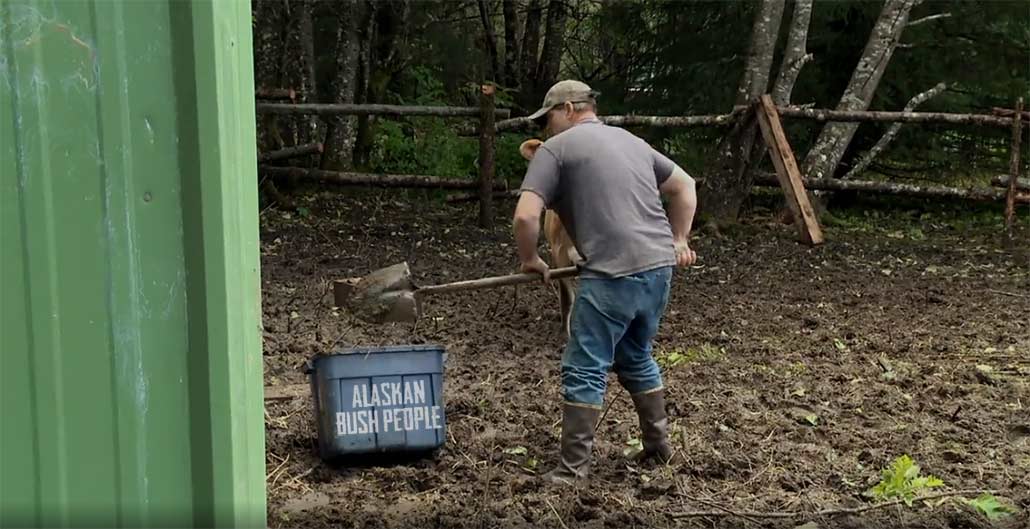 When Kenny’s done piling crap into that plastic tub, it’s going back above Noah’s Bush Shower where it belongs.

It’s dark and visibility is poor at sea. “I can’t see anything out there,” Billy says. “I couldn’t see a log right now to save my life, so we’d just bash into it.” HA! Billy knows all about that.

The next morning, the Integrity arrives at Port Alexander, and not a second too soon for Ryan Mulligan. 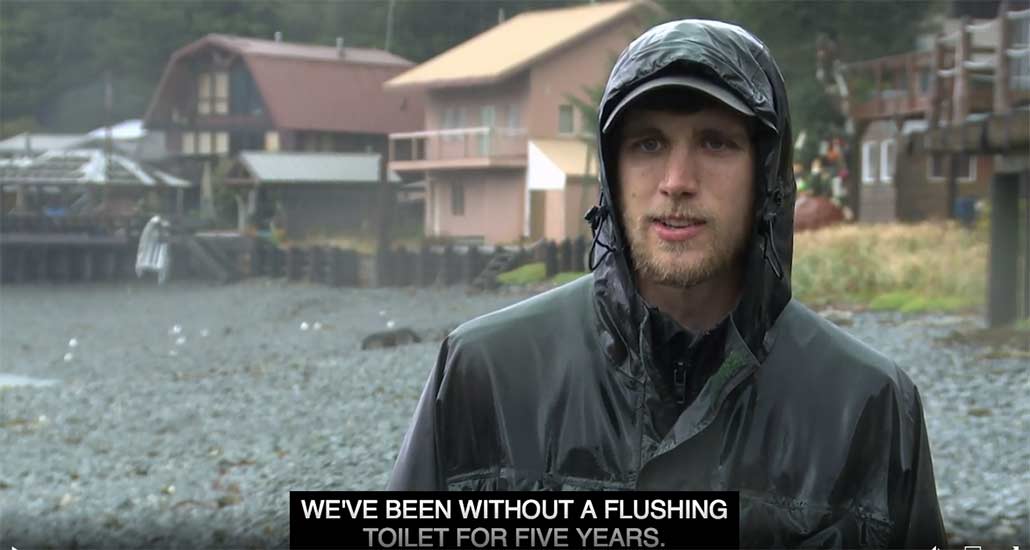 The second septic tank is going to a nice young lady’s home. The Browns almost drop the tank on Rainy, but it’s all good. The lady is pleased with her new septic tank. I almost expect her to ask the Browns to dig the hole for it, too. But the Browns wave goodbye and bid Port Alexander adieu with “Enjoy the septic tank!” Yes, I’ll be using that.

It’s such a perfect day to be out on the water. “The Good Lord’s right there today for sure,” Billy says, almost guaranteeing that the Good Lord will smite them soon. 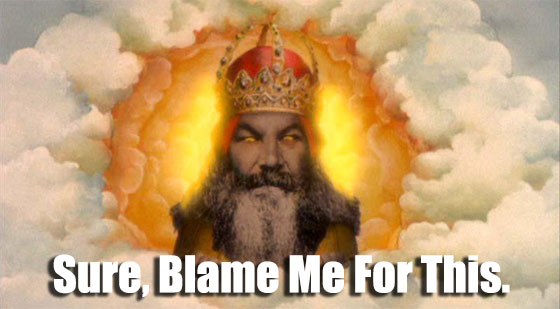 Blah. More Noah. Poor Noah is lovesick over Rhain. He says that he’s always thinking of eight things at a single time — five, at the very least — “but now it’s like all five of them are her.” Noah makes her a bracelet out of those fishing line swivel hook clip thingies. At least he’s not singing or writing high-school sophomore poetry.

Then the Browns hear a distress call over the radio from a fishing boat called the Ostrich. Billy’s not sure if he’s going to respond, but then he thinks of all the times other boat captains helped him out in times of fake crisis, so Billy answers the call for help. The Integrity backtracks to assist the Ostrich, captained by J.J. from Ketchikan. Onboard are J.J.’s ladyfriend and three kids: one disinterested preteen and two cute but camera-shy 4-year-olds wearing footy pajamas. Billy and Ami get sentimental thinking about what life was like on their boat when their kids were young. J.J. is thinking about how to get back at the Browns for trashing Ketchikan.

After that detour, the Browns dock the Integrity in Port Alexander to figure out their next move. Helping the Ostrich threw the Browns off schedule, and now there is bad weather along their originally planned route. Billy says that their best option for avoiding the storm is to take the boat out on open water, even though that has its own separate set of perils. Of course, Bear wants to take the most EXXXXTREME route available. Billy chastises Bear for being too excited about Billy’s foolhardy plan. 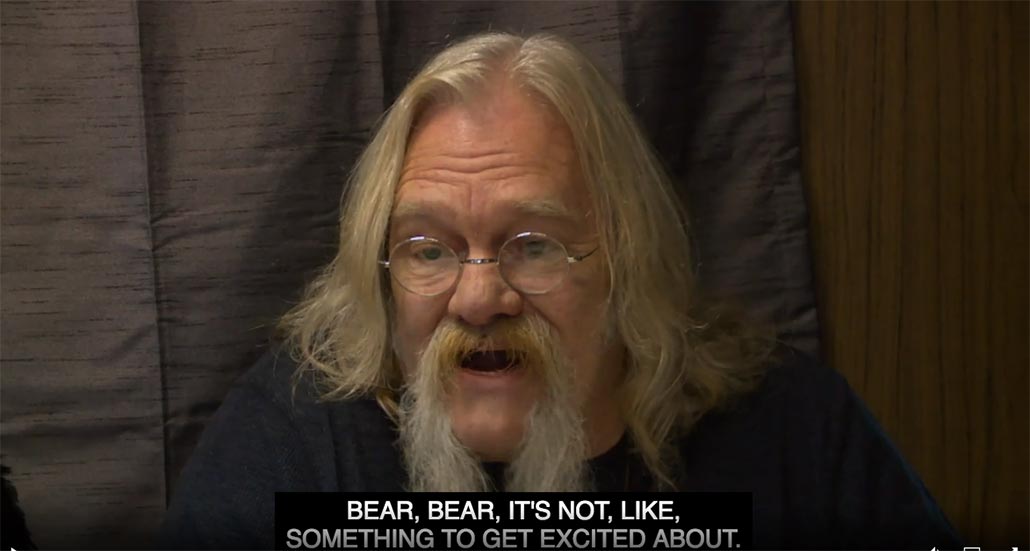 Fortunately, the Browns’ plans — especially the stupid ones like this — rarely go as planned. Bam knows this, and he takes what I interpret to be a subtle but deep dig at the show’s absurdity. 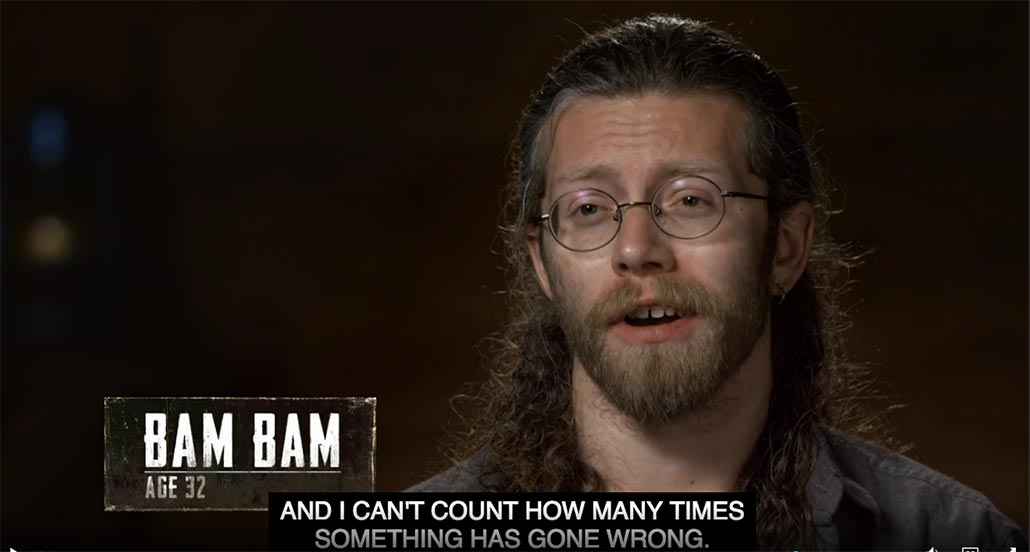 The interstitial segment gives us more Bush Cosmetology tips, like they’re trying to make enough of them to fill an entire special episode about Bush Fashion. Bear discusses his method of keeping his hair looking good, even when gale-force winds and rough seas are about to kill him: He faces into the wind. “Part of being EXXXXTREME is to always look as EXXXXTREMELY good as I can,” Bear says. I wish he’d punch himself. 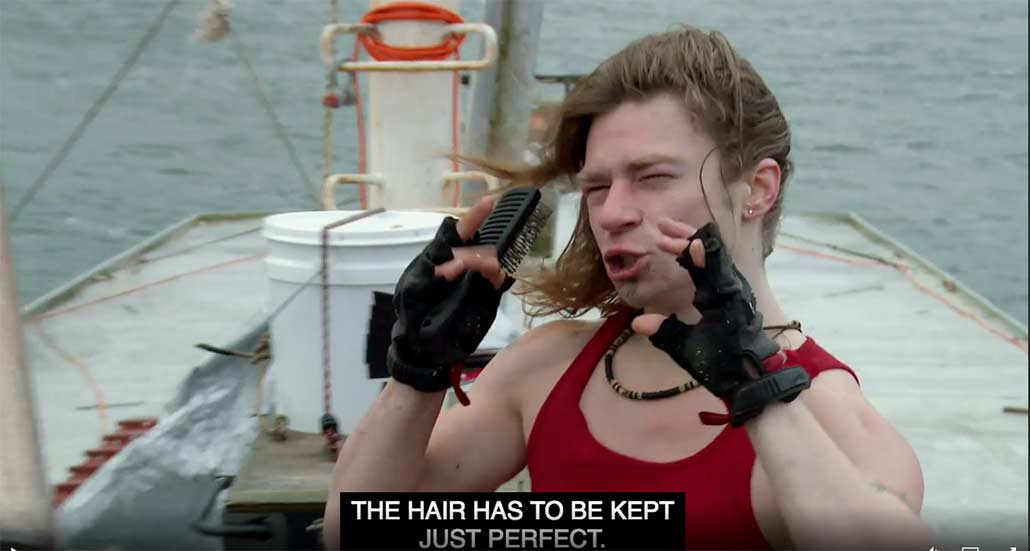 The Browns set sail on the Final Voyage of the Integrity. The sea was angry that day, my friends. Billy’s tired old boat can’t outrun the storm. “It’s literally nipping at our heels right now,” Billy says, abusing the word “literally.” Billy spots a real freighter for a real transport company shipping things for real people, and he thinks it might be wise to stick close to it. That’s Billy for you. Always with the mooching.

It’s time for BARF-O-RAMA! Everybody’s getting seasick. Is there an etiquette to barfing over the side of a boat? Billy tells Rainy to go over to the other side of the boat, as if there are strict rules about port vs. starboard hurling. 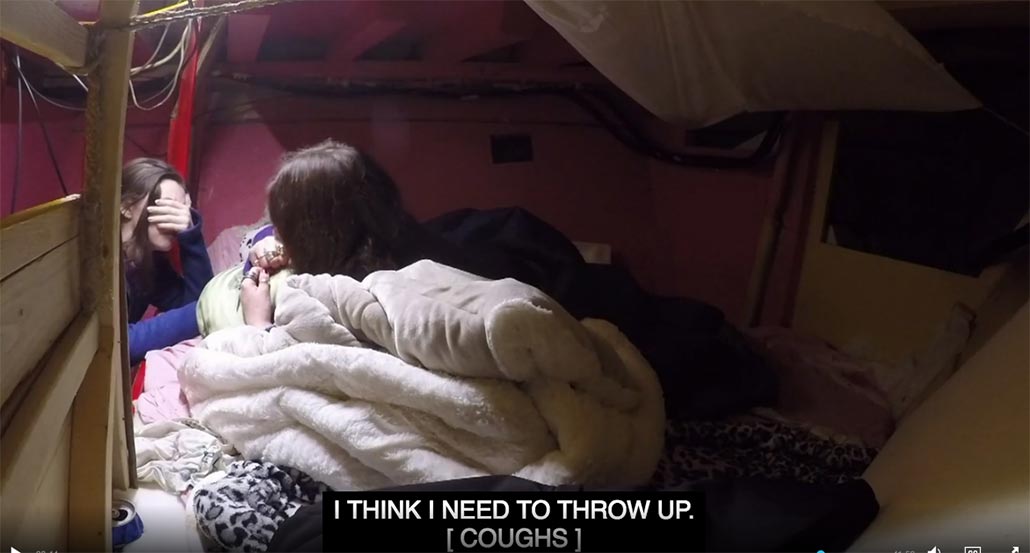 Then it dawns on Billy: “I just put my crew, my family, my boat in a position that I know better and should not have put them in.” Just like when he signed the papers to be on a Discovery Channel reality show.

Next week on Alaskan Bush People: “Dead in the Water III: Bam’s Finally Had It With This Crap.” 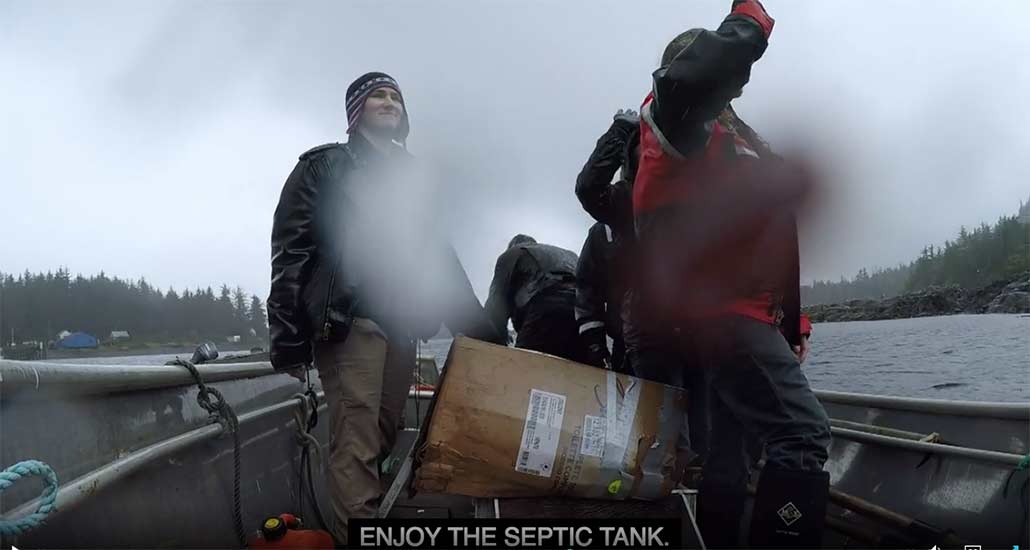