Ask Matt: What’s So Funny About ‘The White Lotus’? 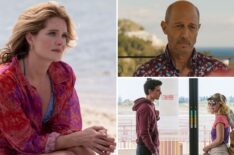 Question: Does HBO really regard The White Lotus as a comedy? I never watched Weeds or Nurse Jackie, but I do, however, remember viewers asking why Showtime insisted on classifying both as comedies. I have now seen both seasons of The White Lotus. The only time I really found it amusing from start to finish was the pilot. Would you call this the latest example of questionable branding? — Paul D

Matt Roush: I may have missed something — I don’t really pay much attention to marketing, and until the last two episodes, I had watched the second season of White Lotus on advance screeners — but I’m not aware that anyone truly regards this series as a comedy in the classic laugh-out-loud sense of how we typically view the genre. The press releases I get from HBO refer to the show as a “social satire,” and I do sense that writer/director Mike White is greatly amused by the foibles of the fascinating characters he creates. And while there are amusing moments throughout, and a sense that what we’re watching play out at times is a very human comedy of errors, I believe the show is being categorized as a drama when it comes to awards recognition now that it’s no longer officially a limited series. That’s the case, anyway, with the Critics Choice Awards, for whom I served on several nominating panels. However you brand The White Lotus, and I’m not sure that’s necessary, it’s a critical favorite.

Regarding your Showtime examples, I always found Weeds comedic even after it got intense and violent, and I understood the debate better when it came to Nurse Jackie — and this year, The Bear — which are very serious in nature but are regarded as comedies because of their half-hour length. (Same applies to HBO’s Barry this season, officially a comedy but it rarely felt that way this year.) Comment: I just want to cast my vote for Alaska Daily as the best new show of the season. I like dramas about spies, cops, courtrooms, and now, investigative reporters. I don’t typically care for programs where the message is the medium, but this one spreads awareness about a real problem while still being entertaining. I’m just sorry I have to wait until Feb. 23 of 2023 for the next episode. — Hal H, Rosenberg, Texas

Matt Roush: I’m rooting for Alaska Daily as well. Being a product of daily local journalism at the start of my career, and a fan of newspapers in general, I appreciate what this series represents in its depiction of a struggling enterprise working diligently to report a story that not everyone wants to hear. I worry for any show that tries to break the mold of doctor-lawyer-police procedural, and while Alaska doesn’t entire avoid newsroom clichés, its heart is in the right place.

By the way, I got some pretty heated feedback from readers who felt a recent question about Hilary Swank’s character (and my response) was sexist. I certainly didn’t intend that, seeing it more as an opportunity to discuss the potential pitfalls when a lead character, male or female, is seen (not always fairly) as arrogant, unpleasant, and unfriendly. Question: I just finished the first season of the South African series Recipes for Love and Murder and truly enjoyed it. Quite a different role for Maria Doyle Kennedy than her The Wheel of Time character, and she was great as Tannie Maria (nice that they used her real first name). She so caringly wove her recipes into helping those who wrote to her, and I loved that the ongoing murder investigations were complicated and many-layered. I’ve heard rumors that this series has been canceled! Please say it isn’t true!!! Not when she just found true romance after so many years of being alone after many years with an abusive husband. Please tell me there will be a Season 2!!! — Rhonda

Matt Roush: Wish I could, but as far as I can tell, there has been no decision made yet, positively or negatively. (Not sure where this rumor came from, though when a show isn’t instantly renewed upon completion, anxiety often quickly sets in.) I found Recipes to be a cut above many of the recent Acorn mysteries and would be happy to see it return. But that will depend on the South African producers and distributors, and I can’t pretend to know how things work in that industry.

Savoring Sugar to the End

Comment: I don’t know whether or not you have been following Queen Sugar through its seven seasons. I really recommend this show. What a wonderful ride it was to follow the Bordelon family members through their challenging yet uplifting lives! Ava DuVernay did a fantastic job in developing a compelling story with interesting characters. The writing, cinematography, direction and acting all contributed to this show’s success for me. Special kudos to Tina Lifford as Aunt Li. Also, I applaud an all-female list of directors throughout the entire season. What an opportunity for them! That certainly could open doors for more projects in the future for these talented female directors. The finale was satisfying and left a feeling of resolution to this family’s journey! It’s a shame it will not get any Emmy recognition, but that’s OK. I’ve had a great journey. — Allen F Matt Roush: This sort of affirmation is always good to hear. (I’m trying to accentuate the positive in my year-end column.) I didn’t follow Queen Sugar closely — no reflection on the show’s quality, more about the overcrowded nature of the business these days — but whenever I sampled it, I was impressed by its quiet dignity and the glimpse into a world too rarely seen on TV. And, as Allen noted, the significance of an all-female directing crew. The good news is that the series should be available to be streamed for a long to come, currently on Hulu.

This Sitcom Is Unreal

Matt Roush: Can’t comment on legalities (not my department), but what seems to be happening here is that ABC has added this disclaimer to the end of The Goldbergs after the departure several years ago of series creator and former showrunner Adam F. Goldberg, who’s no longer involved with the series. Since the show at its inception was so closely associated with Adam’s own upbringing in the 1980s, this is likely an effort to separate what’s happening now on a show that’s obviously way long in the tooth from the earlier seasons. As for Abbott Elementary, though filmed as a mock documentary, it has never pretended to be anything but fictional. Question: Will The Old Man with Jeff Bridges ever return? I am so glad he overcame all of his health obstacles, and I really loved that show. — Fran R

Matt Roush: Happy to say that FX renewed the show while the first season was still underway. I imagine the network’s enthusiasm has only grown since Jeff Bridges, and his co-star John Lithgow, have received nominations from the Critics Choice Awards, the Golden Globes, and the Satellite Awards. And we’re just beginning.

Comment from Matt: The recent question about The Conners casting Jane Curtin as Katey Sagal’s mother, despite there being only a seven-year difference in their age, prompted an outpouring of other examples from avid readers. David F pointed out that Len Cariou, who plays Tom Selleck’s father on Blue Bloods, is only six years older. BJ went back to the archives to recall that Denver Pyle played the father of Doris Day on The Doris Day Show despite being only two years older. And Paul T reminds us that Estelle Getty, who played the eldest of The Golden Girls as Sophia, was actually younger than both Betty White and her TV daughter, Bea Arthur. 'Abbott Elementary': Will Janine & Gregory (Finally) Get Together?

With that, I wish you all a happy holiday and a wonderful 2023. The column will return early in the new year, and remember that we can’t do this without your participation, so please keep sending questions and comments about TV to [email protected] or shoot me a line on Twitter @TVGMMattRoush. (Please include a first name with your question.)

Recipes for Love and Murder where to stream

Recipes for Love and Murder