[Warning: The below contains MAJOR spoilers for The White Lotus Season 2, Episode 7, “Arrivederci.”]

The second season of HBO‘s The White Lotus aired its finale on Sunday, December 11, wrapping up the whodunit mystery in the episode’s final minutes. Now, the show’s creator, writer, and director, Mike White, is opening up about the show and what fans can expect next.

While the season saw its fair share of murders, the most shocking death was left until last, as Jennifer Coolidge‘s Tanya met her demise. The only character to return from Season 1, Tanya’s unfortunate fate was teased throughout the season, particularly when she watched the tragic Madama Butterfly opera. But according to White, the foreshadowing of Tanya’s death goes even further back, to the Season 1 finale.

“In the end of last season, Tanya is sitting with Greg in the last episode, and he’s talking about his health issues, and she says, ‘I’ve had every kind of treatment over the years; death is the last immersive experience I haven’t tried,’ and I was thinking, it’d be so fun to bring Tanya back because she’s such a great character, but maybe that’s the journey for her, the journey to death,” White explained in an HBO Max featurette (via Deadline).

He continued, “Not that I really wanted to kill Tanya because I love her as a character and obviously love Jennifer. But we’re going to Italy; she’s such a diva, a larger-than-life female archetype, it felt maybe we could devise our own operatic conclusion to her life and story.”

Tanya gave a good fight in the finale, taking down the season’s villains in a violent shoot-out before tragically (and hilariously) jumping into the ocean and hitting her head on a metal bar, resulting in her death. 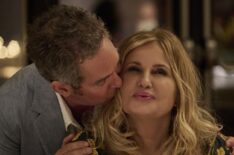 'The White Lotus': What Is Greg's Plan for Tanya?

“I just think her dying at the hands of someone else felt too tragic,” White said about Tanya’s death. “It felt like she needed to give her best fight back and that she, in a way, had some kind of victory over whoever was conspiring to get rid of her. It just made me laugh to think like she would like take out this cabal of killers and after she successfully does that and she just dies this derpy death and that’s so Tanya.”

While Tanya’s story might be over, The White Lotus is set to re-open for a third season, and White all but confirmed the speculation that the next installment will be headed to Asia.

“The first season we highlighted money, and then the second season is sex, and I think the third season, it would be maybe a kind of satirical and funny look at death in Eastern religion and spirituality,” he shared. “It feels like it could be a rich tapestry to do another round at White Lotus.”