'Schmigadoon!' Creator Reveals the Musicals That Inspired the Songs

The Schmigadoon! Audience Clamoring for More

Question: Hearts and a standing ovation for Schmigadoon! Any word on a second season? I think it is PERFECT and there are so many musicals yet to be “referenced.” — Sharon R

Matt Roush: No update yet as I’m answering this question, but this musical-theater buff — starved by the shutdown of most live theater since March 2020 — also would love to see a second round of this delightful spoof-ical. The show’s creator and songwriter, Cinco Paul, has said he has an idea for a continuation, that would also include Melissa (Cecily Strong) and Josh (Keegan-Michael Key) — who we didn’t exactly see leave the magical land of Schmigadoon, though they were taking that step as the season ended. Few shows this year have brought me this much pleasure, and a desire to rewatch, so I’ll stay hopeful that Paul will get another crack at tackling and sending up the great American and Broadway songbooks. Question: CNN’s History of the Sitcom documentary series, though sometimes interesting, might have been wise to remember that the reason the genre has survived so long has at least something to do with people simply wanting to laugh, moments and notions of which have been few and far between in the series which has played out a little TOO much like a stuffy “Dissertation on the Cultural and Economic Realities of America in the post-War Era as Portrayed in the Non-Dramatic Genre Presented in a Televised Format.” (I mean, when the classic The Honeymooners golf segment is chopped up and referred to as simply being “about Ralph Kramden trying to ascend his social class position” then something is a bit off, I think.)

And yet current events in Afghanistan are presenting Chuck Lorre with an opportunity on the upcoming season of The United States of Al to at least follow in a few of the footsteps left by the Norman Lear sitcom model from the 1970s. Lorre has shown a fearlessness in the past to face off with serious issues, such as the perils of addiction on Mom), and on Al’s first season touched upon the plight of people left behind by the U.S. (via the show’s Afghani interpreter lead character) and the difficult psychological issues faced by returning soldiers. With recent events in that nation, do you think he’ll dive back into such issues regarding the U.S. involvement there in an even more necessarily uncomfortable way in a fashion on a network sitcom that we maybe haven’t seen since All in the Family? — Todd S

Matt Roush: I can’t see how the show could avoid addressing the current state of affairs in its second season (due in October and just starting production this month). The situation in Afghanistan has obviously changed so dramatically and tragically and there’s no way to ignore that, not that the show’s writer/producers would want to. (The series’ creators are David Goetsch and Maria Ferrari, not Lorre.) I’m not aware that the producers have addressed how they’re handling this yet, with the situation still ongoing. But I would expect at some point they’ll go public with how they’re taking on this opportunity, and responsibility, for the series to get serious within its topical and timely human comedy.

Say It Ain’t So, Arthur!

Comment: PBS is canceling Arthur? I guess it is true, then, the world is ending and they have lost their minds. — Wendy W, Gig Harbor, WA

Matt Roush: It sure seems that way, doesn’t it? If I truly believed Arthur was disappearing from public TV, I’d be more upset. But with 25 years of episodes, numbering over 240, new generations will be able to watch this wonderful children’s series as if it were new. And when this news was confirmed, the show’s executive producer noted that they’ll continue to develop new Arthur content for PBS Kids and other platforms, so all is not lost. But yes, to hear the word “canceled” in association with a show like Arthur would be like learning they’re turning the lights off on Sesame Street. 3 Essential 'All in the Family' Episodes to Stream Right Now

A Case of Dance Fever

Question: Will So You Think You Can Dance ever come back? It was an awesome dance show and would be really great now, since Dancing with the Stars sucks now! — Carol

Matt Roush: The pandemic obviously made it impossible to produce the show for the last two summers, but Fox hasn’t ruled out future seasons, although the longer So You Think You Can Dance remains a fond memory the harder it may be to get it up and running again. So I’ll stay cautiously optimistic that we’ll see it again, because at its best it was my favorite dance competition even before ABC started screwing with Dancing with the Stars. 'Arthur': Should PBS Have Kept the Animated Series Going? (POLL)

Comment: A few years ago I wrote to the producers of The Good Fight to tell them how disappointing that season was. I knew the Kings could and would surely do better going forward. Now Thursday is the highlight of the week when a new episode drops on Paramount+. Kudos to the great ensemble cast who had to be delighted with the scripts this season — especially Mandy Patinkin, born to inhabit Judge Wackner. — Ann, Lebanon, OH

Matt Roush: I’m curious what got you so riled in the past. (The only time I was disenchanted with the series was in Season 3, when Michael Sheen’s avaricious character of Roland Blum went too far over the top too often. His psycho act worked much better on Prodigal Son, RIP.) No argument that this season has been a treat, and while I sometimes roll my eyes at Judge Wackner’s antics — such as the litigants’ animal suits, which do at least make me laugh — it’s a great role for the great Mandy Patinkin, and this alt-court does score points about the state of the legal system and our culture, which has always been among The Good Fight’s greatest satirical strengths. Comment: I’m a big fan of Animal Kingdom, having watched since it first aired. I was a little concerned about the loss of Ellen Barkin affecting the show, but it is better than ever. I do not understand why this show is overlooked for any Emmy nominations — the writing and the acting are so good, especially Shawn Hatosy, who also appeared in another John Wells-produced show, Southland. Just wish this show would get some recognition. — Bobbie

Matt Roush: These days, making it to a sixth season is achievement enough for most shows, and as we’ve explained exhaustively in the past, breaking into these cluttered categories is harder than ever, with the glut of production, especially in streaming. (Past seasons of Animal Kingdom are available on Amazon Prime Video for those, like me, who’ve fallen behind.) Glad to hear Animal Kingdom hasn’t lost its oomph even without its leading lady. 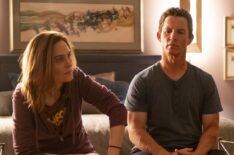 Why Was [Spoiler] Was Killed Off on 'Animal Kingdom'?

Question: Forget about the Lord of the Rings series, I want to know if Amazon Prime Video is going to have a second season of Carnival Row? — Gary T

Matt Roush: Yes, that’s the plan. (And don’t let Amazon hear you dismissing their expensive Tolkien project!) Production of this, like so many others, was disrupted by the pandemic, and there have been reports that the second season could be split into two parts to allow the already-produced episodes to air with the remainder to drop later, but none of that is official yet. Amazon's 'The Lord of the Rings' Series Shifts Production to the U.K. for Season 2