The Reagans aren’t going to have it easy (but when do they ever?) in the next Blue Bloods (airing February 5).

In “The New Normal,” Frank (Tom Selleck) deals with a police captain who’s losing his grip over his precinct. What might his inner circle — Baker (Abigail Hawk), Garrett (Gregory Jbara) and Gormley (Robert Clohessy) — have to say? One of the photos for the episode shows him sitting down with them.

Elsewhere, a social worker joins Jamie (Will Estes) and Eddie (Vanessa Ray) for a ride-a-long and shows them the ropes of field crisis management. Is that the top of conversation in some of the images (including above) of the couple at home? 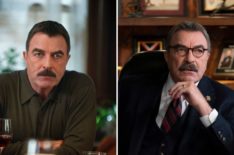 Plus, Danny (Donnie Wahlberg) faces backlash from Baez (Marisa Ramirez) and Internal Affairs about a tough call he makes in the field, and Erin (Bridget Moynahan) weighs the consequences of the release of a dangerous criminal under new bail laws.

Scroll down for a sneak peek at “The New Normal.”