Olivia Colman is trading in her crown for some intergalactic action as the Oscar-winning actress is set to reportedly join Disney+’s forthcoming Marvel series Secret Invasion.

The previously announced project sees the return of Samuel L. Jackson in his beloved Marvel Cinematic Universe role as Nick Fury. The British actress is said to be in the negotiation stage of the process, fresh off her run in the film The Father. 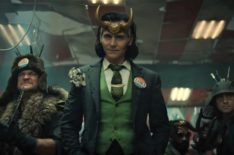 According to The Hollywood Reporter, Colman’s character hasn’t been unveiled, but she’d join both Jackson and Ben Mendelsohn who would reprise his Captain Marvel role as shape-shifting Skrull, Talos. Secret Invasion will use the events of Marvel’s feature film Captain Marvel as a jumping-off point for this latest project.

While no exact storyline is available quite yet, an infiltration of Skrulls on Earth will be part of the series. Another piece of casting reportedly includes Kingsley Ben-Adir as a possible villain, but nothing has been confirmed. Secret Invasion is just one of many Marvel series on Disney+’s upcoming slate which also includes the highly-anticipated Loki, She-Hulk, Hawkeye, Ms. Marvel, and Moon Knight among others. If the streamer’s first two Marvel shows, WandaVision and The Falcon and the Winter Soldier, are any indication, Secret Invasion is likely to be another hit.

Along with Landscapers, this would be one of Colman’s first major TV roles since her departure from The Crown following its fourth season on Netflix. Imelda Staunton will step into the role Colman previously inhabited as Queen Elizabeth II for Seasons 5 and 6 at Netflix.

Stay tuned for any updates or confirmation regarding Colman’s possible casting in Secret Invasion.