Worth Watching: The Real Laura Ingalls Wilder, ‘Streets of Dreams,’ ABC Looks Back at 2020, ‘Teacher’ Finale

Laura Ingalls Wilder: Prairie to Page (8/7c, PBS; check local listings at pbs.org): For those who love Little House on the Prairie — and who doesn’t — but always wanted to know more about Laura Ingalls Wilder, American Masters delves into the history of the beloved Prairie author in a revealing documentary. Victor Garber narrates the special, featuring interviews with Melissa Gilbert (TV’s Laura), Dean Butler and Alison Arngrim from the 1970s classic. Tess Harper and Amy Brenneman read letters from Laura and her daughter, Rose, which underscore the role Rose played in her mother’s late-in-life literary success. 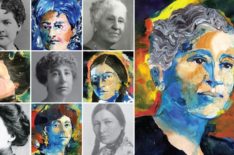 The Year: 2020 (9/8c, ABC): For the 10th year, ABC News offers a retrospective of the last 12 months, in this case a period most of us would just as soon forget but which we’re likely to remember forever. Robin Roberts anchors, with reports by George Stephanopoulos, Michael Strahan, David Muir, Juju Chang, and others on the news team. There’s a lot to cover in the two hours: the devastating global pandemic, the Black Lives Matter movement, the presidential election and its bizarre aftermath, a record number of ruinous storms and fires, curiosities like Tiger King and notable passings including Ruth Bader Ginsberg, civil-rights pioneer John Lewis and Jeopardy! host Alex Trebek. The saga of the zoo owner turned convicted felon has all the hallmarks of a cringe-worthy binge.

For a different sort of retrospective, The CW presents Popstar’s Best of 2020 (8/7c), based on polls from the magazine’s readers, with host Elizabeth Stanton (World’s Funniest Animals) taking us through the trends, moments and obsessions that made 2020 bearable. Streets of Dreams with Marcus Lemonis (10/9c, CNBC): The host of The Profit hits the road to traverse iconic streets throughout the country that epitomize an industry or business, exploring the entrepreneurs and enterprises that put these places on the map. His first stop: New York City’s Diamond District, on 47th Street in Midtown Manhattan, where he meets jewelry dealers and craftsmen and gets pointers on how to get the best deal on a diamond on the street. Future stops include Nashville’s Music Row, San Diego’s Harbor Drive, Denver’s Green (as in marijuana) Mile and Little Havana’s Calle Ocho in Miami. The teaser was unveiled at New York Comic Con.

A Teacher (streaming on FX on Hulu): The final chapter of the disturbing drama jumps forward 10 years, when Eric (Nick Robinson) returns home for a high-school reunion and sees his former teacher, and lover, Claire (Kate Mara) for the first time in years. Both have tried to move on, but a reckoning is in order for them to assess the true impact of their ill-advised affair.

Get ready '90 Day' junkies & DIY'ers — a new streamer with your favorites is just around the corner.

Inside Tuesday TV: TLC’s 7 Little Johnsons (8/7c) is back for a new season, with dad Trent and mom Amber feeling the crowded-house syndrome with their five kids as they ride out stay-at-home orders during the pandemic… Tell Me a Story, the thriller built around modernized and fractured fairy tales, ends again, with the series finale on The CW (9/8c) after having aired for two seasons on CBS All Access… Knowing we could all use a good drink right about now, Discovery serves up a second season of Master Distiller (9/8c), which pits three of the country’s premiere booze makers each week to come up with a concoction that will best quench the judges’ thirst… As if ABC’s Supermarket Sweep reboot wasn’t enough, Food Network’s Supermarket Stakeout (10/9c) returns for a third season with Chopped judge Alex Guarnaschelli challenging four foodies to make something magical out of exiting grocery customers’ carts.

Streets of Dreams With Marcus Lemonis