A West Wing Special to Benefit When We All Vote (streaming on HBO Max): Some TV reunions can feel routine, but this one stands out: a gathering of the brilliant cast from Aaron Sorkin's legendary political drama The West Wing. Martin Sheen, as noble fictional president Jed Bartlet, leads an ensemble including Allison Janney, Rob Lowe, Richard Schiff, Bradley Whitford, Dulé Hill, Janel Moloney and special guest Sterling K. Brown in a theatrical staged reading of the 2002 episode "Hartsfield's Landing." The benefit, raising awareness for the nonpartisan When We All Vote organization, features composer W.G. Snuffy Walden providing a guitar cover of his stirring theme song, with folk-rock band The Avett Brothers closing out the special. 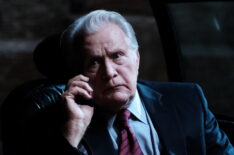 See the cast back in character in the trailer for the theatrical presentation of the Season 3 episode, 'Hartsfield's Landing.'

Dueling Town Halls: While The West Wing is revered as an idealized look at how politics might operate in a more hopeful and civil time, rival head-to-head town halls for the current presidential candidates — replacing the joint debate originally scheduled — symbolizes how dysfunctional and divisive this year's campaign has become. Each candidate participates in a forum on a network where his rival appeared earlier. ABC News' The Vice President and the People: A Live Edition of 20/20 (8/7c) features Joe Biden in a 90-minute town hall, moderated by George Stephanopoulos from Philadelphia's National Constitution Center, followed by a 30-minute post-show. NBC News' hourlong Decision 2020: Trump Town Hall (8/7c), with Savannah Guthrie moderating from Miami's Pérez Art Museum, follows the format of the network's previous session with Biden. What are the odds anyone will be listening outside of their respective echo chamber? 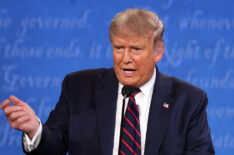 Star Trek: Discovery (streaming on CBS All Access): The Trek spinoff boldly reinvents itself in the third season, as Commander Michael Burnham (Sonequa Martin-Green) leaps 930 years into the future in her tricked-out spacesuit, and where she'll land, nobody knows. The premiere episode focuses on her bumpy arrival, when Burnham collides with the ship of space pirate Cleveland "Book" Booker (a jaunty David Ajala). Stranded together, this could be the start of a fun, if rocky, relationship. (Where and when the U.S.S. Discovery lands is dealt with next week.)

What could develop between Burnham and Book? And what's the Burn?

Des (streaming on Sundance Now): Reminiscent of Mindhunter in its grim power, this riveting three-part British docudrama stars a chilling David Tennant as seemingly mousy public servant Dennis ("Call me Des") Nilsen, who calmly claims he murdered 15 men in his London flat in the late 1970s and early '80s. His deeds are discovered only after human remains are found in a clogged drain, and when confronted, Des confesses with no sign of emotion or remorse beyond a slight, shrugging regret that he can't be more help in identifying his victims to the police. Leading the investigation — not so much a whodunit but who-was-it-done-to — is dogged DCI Peter Jay (Daniel Mays), who's understandably unnerved by the killer's implacable nonchalance. Des also tracks the relationship between Nilsen and his opportunistic biographer, Brian Masters (The Crown's Jason Watkins), a posh writer who, shades of Truman Capote and In Cold Blood, insists he merely wants to "comprehend" this man's vile actions by trying to learn what makes him tick. 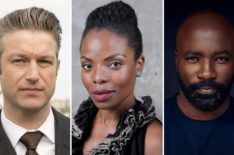 Social Distance (streaming on Netflix): From producers of Orange Is the New Black, this eight-episode anthology of blissfully brief (under 30 minutes) vignettes — some funny, most poignant — about the challenges of life during the pandemic is better than most at finding offbeat takes on the now-familiar multi-screen format. Among the more successful short stories: Orange's Danielle Brooks as a single mom whose job, caretaking for an immobile client, is complicated by keeping an eye, via phone, on her young daughter left at home alone; and Evil's Mike Colter as a recovering alcoholic in isolation whose Zoom AA meetings are his lifeline to the world outside his apartment. Inside Thursday TV: Also new on Netflix: A Babysitter's Guide to Monster Hunting, about (what else) a secret society of babysitters who protect their charges from evil ghouls. Calling all Buffys!… The Power of We: A Sesame Street Special (PBS, check local listings at pbs.org; streaming on PBS KIDS and HBO Max) addresses racism and how to stand up to it, with Elmo, Abby Cadabby, 6-year-old Muppet Gabrielle and her 8-year-old cousin Tamir, learning life lessons about tolerance from Sesame Street's adults and celebrity guests including Yara Shahidi, Christopher Jackson and Andra Day… Matt Cohen (aka young John Winchester) directs an episode of The CW's Supernatural (8/7c) in which the brothers (Jared Padalecki and Jensen Ackles) head off to find Amara (Emily Swallow)… HGTV's hit Flip or Flop (9/8c) returns, with Tarek El Moussa and Christina Anstead upgrading a two-bedroom home for sale in the L.A. market… Streaming service Topic premieres the nine-part Israeli dramedy Nehama, about a widower (Reshef Levi) and father of five who risks it all to pursue his dream of stand-up comedy… Also on Topic: One Story Up, a monthly anthology of short films by up-and-coming directors, curated by Oscar-winning Black filmmaker Roger Ross Williams. First up: the impressionistic Cherish: A Visual Poem from Terrance Daye.