[Warning: The below contains MAJOR spoilers for Season 5, Episode 8 of Lucifer, “Spoiler Alert.”]

If you thought the cliffhanger of Episode 7 was something, it has nothing on the ending to the first part of Lucifer‘s fifth season. (How long do we have to wait for that to play out?)

The Netflix drama packs a lot into just over one hour: the hunt for a serial killer by Lucifer (Tom Ellis), using what he’d picked up in his time with Detective Chloe Decker (Lauren German), a kidnapping, an epic showdown between brothers, and one heaven(?) of an ending. Plus, forensics specialist Ella Lopez (Aimee Garcia) takes a big step — and wonders if they’re moving too fast — in her new relationship with reporter Pete (Alex Koch) when he gives her a key to his place. She decides they have a good thing going, but is she right?

Meanwhile, Amenadiel (DB Woodside) worries about his half-angel, half-human baby when Charlie runs a fever, but is there more to it than that? Plus, who’s hiding a wicked side?

Focused on the Wrong Thing

Picking up where “Our Mojo” left off, Chloe hurries to Lucifer’s side after her ex-husband, Detective Dan Espinoza (Kevin Alejandro) shot him, his reaction to the confirmation the LAPD’s consultant is actually the devil and a conversation with the archangel Michael (Ellis). But surprise! Lucifer’s fine! He’s no longer vulnerable around Chloe, as he has been in the past. (He even proves it by shooting himself again.) Chloe tries to reason with Dan that Lucifer’s a good person, but her ex hurries off. 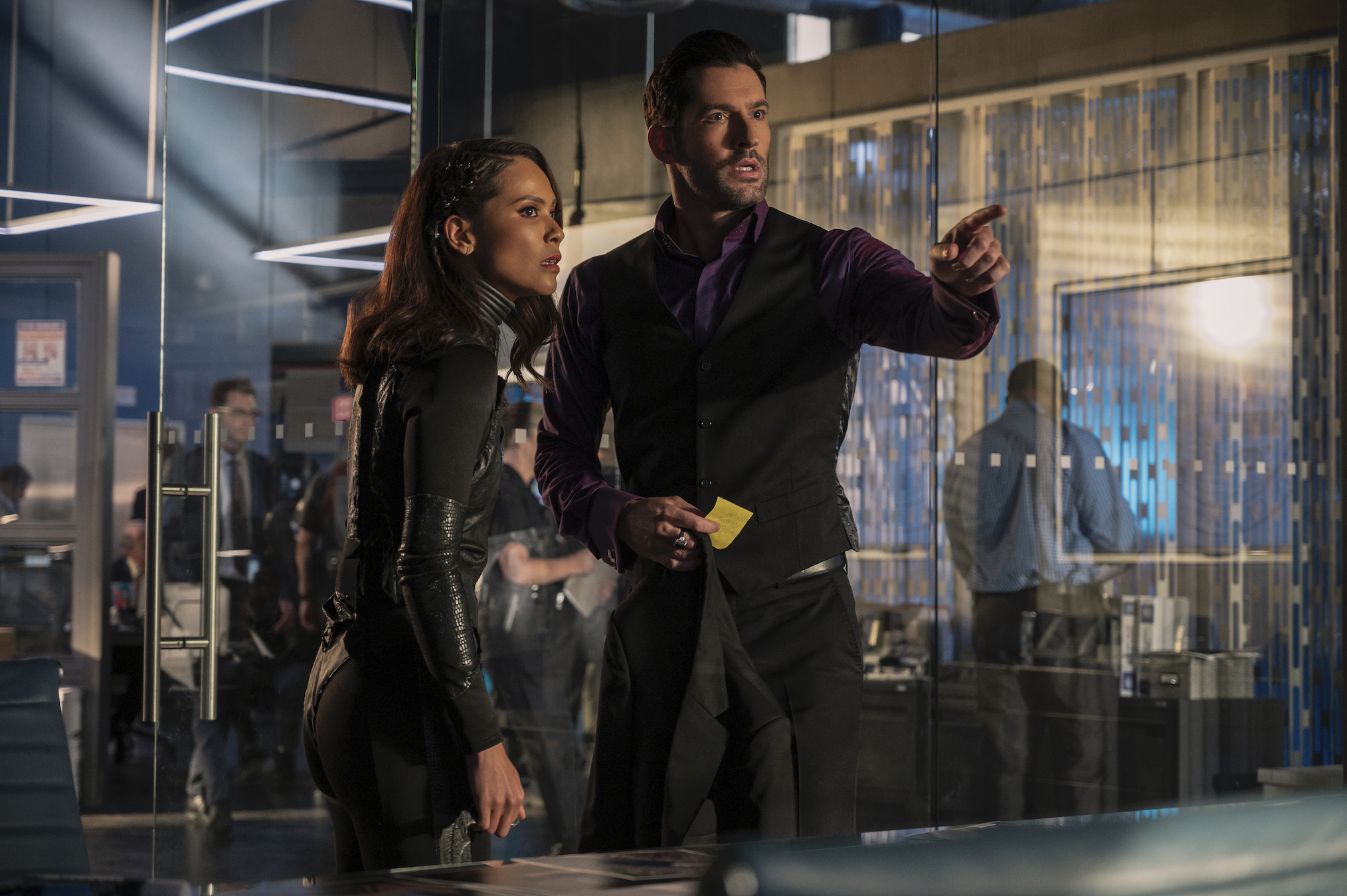 The next day, she has to stop Lucifer from putting a snake in Dan’s desk, but he remains focused on plotting his revenge somehow, even as she questions the results of the Whisper Killer case. Serial killers often have a connection to the first victim, then move on to strangers; Les Clumsky only knew the last one. Lucifer even asks the killer for advice for his revenge plan when they visit him in prison. Chloe’s more focused on getting Les to trip up when it comes to details about the victims she suspects he didn’t kill. She’s right that there’s more to the case: he’s a copycat. The Whisper Killer is still out there.

While Lucifer works on Operation Payback Dan, Chloe digs in the case and just as she leaves her partner a voicemail about a lead … she’s grabbed from behind!

As soon as Lucifer hears the message, he flies over to her place, but it’s too late. She’s gone, and her place is trashed. They assume the original killer got to her to cover his tracks. Without his usual partner, he brings Ella with him to follow up on Chloe’s lead: Scotty Thomas, whose apartment looks like that of a killer’s, but that’s only because it’s research for a game he’s creating. He connected with Les on a dark web site for serial killers, and Les referenced another user, LilyMan85, whose posts are first-hand accounts of the Whisper Killer’s murders, with details that haven’t been made public. LilyMan is the original killer.

Though Ella calls in backup, Lucifer rushes into the house they trace LilyMan’s posts to, only to find a blonde woman dead in a back room. Fortunately, it’s not Chloe, but where is she? Lucifer hopes his brother can help, but Amenadiel reminds him he can no longer slow down time. Do some “good ol’ fashioned detective work” and use what he’s learned from Chloe, the angel recommends (just like the devil did in the season premiere).

Maze (Lesley-Ann Brandt) may be upset with Lucifer for not telling her about his past with her mother, but when he tells the demon Chloe’s missing, she immediately helps by doing what she does best. A conversation with Les in his cell (with five broken ribs, a torn rotator cuff, and “It’s a Small World” on repeat, obviously the worst of the three) gives Maze the information that LilyMan looked for women who talked a lot in restaurants. Combining that with Lucifer’s investigation leads the two of them to the only restaurant on the victims’ credit card statements with CCTV while Ella heads to Pete’s to check out the files he’s gathered on the Whisper Killer for his articles.

Lucifer’s too worried about Chloe to do anything but to essentially laugh off Maze’s questions about a demon getting a soul, especially once they see who approaches a victim on the security footage. “Oh my Dad,” Lucifer says.

Meanwhile, Ella uses her key to enter Pete’s house and … you know where this is going. (Poor Ella. He really was just too nice.) She finds a room filled with lilies hidden behind a wall and exits it just as her boyfriend arrives home. And as soon as he notices the fake outlet hanging off his wall indicating what she’d discovered, he attacks her. But Ella fights back, eventually knocking him out using one of his own syringes.

While Lucifer and Maze are debating who should question Pete, Ella enters the interrogation room and demands to know where Chloe is. She thought she found a good guy, she laments. He is a good guy, he insists, and as for the killing people, well, “everyone has flaws.” His mother screamed at him all day, every day and only loved her lily garden, he reveals, admitting he started seeing Ella to stay ahead of the investigation. She realizes he was going to kill her because she fits the profile (a talker). True, he agrees, even though he did try to feel something, anything, with her. But alas, the “only time I feel anything is when I’m hearing them choke on their own blood, unable to talk,” he says. However, he thinks they have a lot in common: “There is darkness in you, Ella, I recognized it the very first moment we met.”

As for Chloe, he swears he didn’t do anything to her, and Ella knows he’s telling the truth. “Just to be clear, this is you breaking up with me, right?” Pete checks as she walks out of the room. “You’re going to burn in hell,” she says as parting words. But if he didn’t take Chloe, who did?

When the Kids Are Bad…

Just as Maze realizes this may be about hurting Lucifer, not Chloe, we see where the detective is: in a cell, being held by … Michael. (No surprise there. He was being too quiet.)

There’s not much Chloe can do in her cell, but at least she made him waste $7 on a latte by knocking the offering out of his hand. Michael assures her that her accommodations are just temporary and this is all part of his bigger, “epic” plan. He knows all about the changes Lucifer’s been going through and her questioning what they mean, and while she thinks he’s just trying to make her afraid of their relationship, Michael reminds her he can’t create fears, just expose what’s already there. Angels self-actualize, he continues, meaning Lucifer choosing to be vulnerable around her meant something … as does his new development. He also gets her thinking about the fact that Lucifer hasn’t actually said the words “I love you” quite yet.

In other Michael news, Maze drags Dan out of a bar, where he’s been dealing with his recent discovery, to Lucifer to answer questions about the night he saw the devil’s true face and his interactions with Michael. The archangel took the detective to a cave to chat after finding him in the cemetery, but he has no idea where it is because he passed out on the flights there and back. Fortunately, his description of the area is enough for Lucifer.

Thinking he’s Michael returning, Chloe knocks him over the head with a bar when he enters the cell. When she sees Maze and Dan following him, she realizes her mistake and kisses him. Their reunion allows Dan to see that Lucifer really does care about her. “Freakin’ soulmates,” Maze says.

But where’s Michael? Soon after Amenadiel and Linda (Rachael Harris) get good news that Charlie only has a cold, Lucifer’s twin approaches his brother to “support” him. He’s so sorry about the baby’s cold because they know what that means…

Michael then returns to the cave, only to find Maze waiting, blades out, which isn’t as much a surprise as she thought it would be. He promises he was never going to hurt Chloe and reminds her that he’s the only one who’s been honest with her. When he gets what he wants, so can she, he sweet-talks her.

Back at the police station, Chloe and Lucifer duck into a closet to catch up, and he can tell something’s bothering her. She wonders if he’s no longer vulnerable around her because he’s not letting her in and admits part of her fears he doesn’t feel the same way about her as she does about him. He realizes this is about him not saying “I love you” and explains it’s complicated, but of course he feels that way. But after he purposefully calls her “Chloe” instead of “Detective,” she suddenly freezes. And Lucifer finds that everyone’s frozen except Amenadiel, who’s pacing, worried about Charlie. (Maybe he should have taken a moment to speak with his brother rather than brush him off to talk to Chloe.) Michael was right, Amenadiel explains. Charlie is mortal. He’d assumed his son was like them, but he’s like every other ordinary human child. He’ll get sick again, feel pain, grow old, and suffer. But he doesn’t know how he stopped time. Just stop being afraid, since it was obviously triggered by his fears, Lucifer suggests.

That’s when Michael walks in, congratulating Amenadiel on being an “overachiever” by stopping time. (Anyone else not impressed by Michael or all his talk about his “plan”?) Then we get the twins as the angel and devil on Amenadiel’s shoulders, with Lucifer trying to assure him Charlie won’t die anytime soon and Michael saying he’s destined to die a horrible human death. Amenadiel attacks Michael but is surprised when Maze intervenes to defend the archangel. Michael promised her a soul, she explains, and when Lucifer tells her that’s impossible, she kicks him through a glass wall, which really looks cool since time is frozen. Lucifer and Amenadiel face off against Michael and Maze, but after the devil knocks down Maze and the three angels face off, wings out — “That’s enough,” a voice declares. And out of the bright light steps… “Dad,” Lucifer says. “Children. You know I hate it when you fight,” God (Dennis Haysbert) tells them. That introduction was certainly worth waiting for. What better way to end a (midseason) finale?!