‘Wynonna Earp’ Gets a Major Blast From the Past (RECAP)

[Warning: The below contains MAJOR spoilers for Season 4, Episode 4 of Wynonna Earp, “Afraid.”]

The gang’s (almost) all back together!

The new normal of Purgatory includes a very familiar “ally,” as demon hunter Wynonna Earp (Melanie Scrofano) finds herself facing her past once again. And as much as she, sister Waverly (Dominique Provost-Chalkley), vampire Doc Holliday (Tim Rozon), former sheriff Nicole Haught (Katherine Barrell), and Jeremy Chetri (Varun Saranga) may hate it, they’re going to need all the help they can get. Because by the end of the episode, Wynonna and Waverly have really gotten a blast from their family’s past, one that means trouble for everyone on the homestead, including teen (and newest member of the group) Rachel Valdez (Martina Ortiz-Luis).

Meanwhile, Doc continues to hang out at the demon bar, with its proprietor Amon (Noam Jenkins), who may have taken a liking to the vampire but makes it clear that he’ll turn on him if he doesn’t deliver his supplies. And it’s during one of their conversations that we get a callback to Season 1, Episode 9. “Everybody knows you’re Wynonna Earp’s man, or is Wynonna Earp your woman?” Amon questions. “Wynonna is no one’s but her own,” Doc corrects him.

Unsurprisingly, Wynonna had that black bag thrown over her head at the end of Episode 3 to bring her in to Black Badge. Yes, that government division is back, with a new deputy assistant director, Naomi, whose previous position was with the Department of Fisheries. (BBD was desperate for volunteers, clearly.) They need every employee, no matter how minor, she explains to Wynonna, whose folder is quite thin. The demon hunter immediately hugs Jeremy when she sees him, but he treats her like simply a former colleague, confirming that she, too, hates demons like the rest of BBD, but she’s never killed one. Wynonna goes along with it. Elsewhere, an unknown person slices their hand open over a photo of Wynonna before something chained up forces its way free.

Back at the Earp homestead, Waverly’s disappointed that no one’s come to her presentation going over what they do and don’t know about what’s happening—she had a PowerPoint! and notebooks!—but she and Nicole do take advantage of the empty house.

Naomi explains to Wynonna they’re supposed to observe humans and demons coexisting and keep the demons from leaving. As Jeremy leads Wynonna off on a private tour, she finds a rock in her pocket and tosses it to a guard since she assumes it’s BBD’s attempt to spy on her. But after that guard throws away the rock in the next scene, he’s beheaded by something offscreen, so she’s clearly wrong.

Jeremy takes Wynonna to the only blind spot in the building so they can finally talk and explains that the new Black Badge isn’t evil. It’s just filled with people in over their heads. But hey, at least they have cool weapons, like the jumpsuit and the “masterpiece” he designed that essentially turns things “into guacamole.” (It’s not until later he finds out Wynonna doesn’t have that magic gun of hers that would be so helpful in a fight against demons.)

Still, her first mission is pretty lame: riding in the passenger seat of the truck delivering supplies to Purgatory. Wynonna’s (understandably) offended. “You don’t ask Cate Blanchett to be a background extra. You make her Carol. Forget the cover,” she says. “I am a demon hunter, man. I am Carol.” Jeremy agrees (“I’m a scientist with an empathetic crotch”), but BBD doesn’t like anything supernatural. Don’t push the red button on his gun “unless it’s apocalypse now time,” he warns her (and wishes he’d never included it with her fooling around). Before heading off, she finds another rock in her pocket, and Jeremy confirms it’s not BBD tech. So what is it?

Meanwhile, Rachel meets up with her friend Billy (Billy Bryk) to exchange stuff they find lying around (including a pocket knife and hubcap) and dodges his attempt to kiss her. But she does try to invite herself over, only for him to awkwardly dodge that. His place is “sad,” he claims, and he’s not in a situation where friends can visit.

So Rachel takes matters into her own hands and, after finding Waverly and Nicole wrapped in a sheet on the kitchen floor (and interrupting Waverly’s attempt to talk about her pre-Garden proposal), suggests they look for Wynonna’s missing gun at his family’s junkyard. Once there, a woman pulls Waverly and Nicole away from car parts … and the creature that was chained up earlier and they can’t see. They’re looking for “vintage cutlery,” bigger than a knife, they claim, for a Halloween costume. But once Waverly steps aside to take a call from Wynonna, the woman, Margo, tells Nicole it’s good to see her again and “it’s time for you to deliver.” 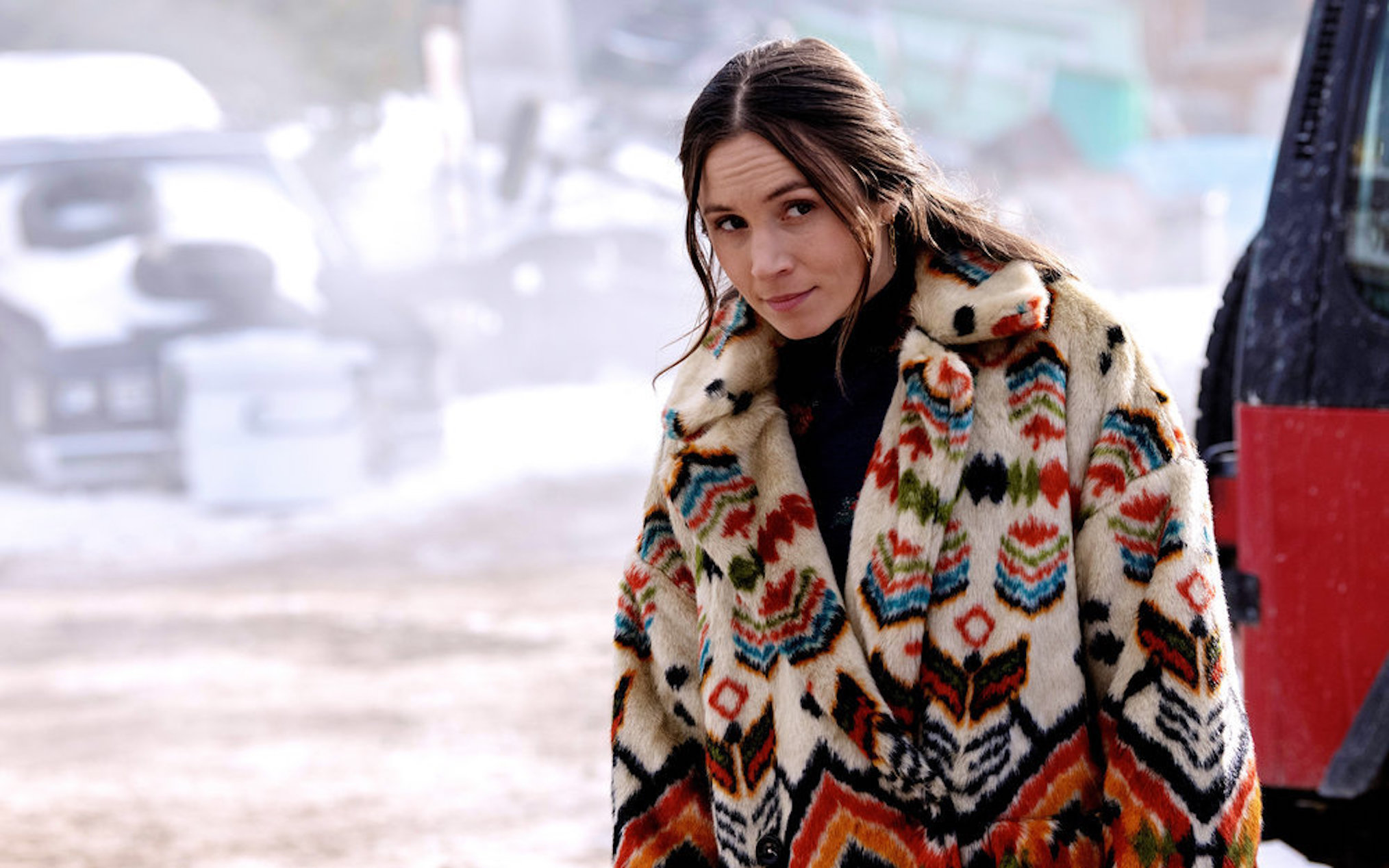 Wynonna asks her sister to look into the symbol on the latest rock she found, but Waverly doesn’t recognize it. But if she turned around, she would have seen it on a piece of wood in the junkyard…

Fresh off Billy insisting she has to leave, Rachel is eager to go, and she, Waverly, and Nicole leave empty-handed. After they do, Margo remarks that she expected Billy to have better taste. An “Earp lover” is apparently just as bad as an Earp in her mind, and it’s up to him to make it right. If he doesn’t, she warns, she found a photo of him and Rachel, which will come in handy. “Don’t make me reap that girl,” she says.

Wynonna’s (previously) lame mission of the day takes a turn when someone takes out the tires on the truck, and the driver refuses to stick around to see who’s responsible. (“Who cares about these townies?” he asks before running off.) To her surprise, she finds Doc trying to rob the supplies (for Amon).

Doc’s offended that she didn’t tell him immediately about seeing Jeremy. (Who doesn’t love that friendship?) He also can’t believe she’s working for Black Badge after they experimented on the late Xavier Dolls (Shamier Anderson). Her solution to keep him from stealing the supply of whiskey is to handcuff herself to the crate (before realizing she doesn’t have the key), and after a bit of flirting, he goes off to get this tools from the car.

It’s unclear exactly how far away he parked his car considering when we next check on Wynonna, still cuffed to the crate, it’s the dead of night … and she’s found another rock. “You are definitely evil and creepy as hell, and I respect you,” she says. “Let’s just go our separate ways.” When the creature from earlier climbs into the truck, she yells for Doc. It does do one good thing—free Wynonna from the cuffs—but it slices not only through that chain but also clean through Jeremy’s gun. Unarmed, Wynonna runs off into the woods… and right into an area marked by piles of stones.

An Enemy Full of Hate

Wynonna’s not the only one finding rocks in her pockets. Rachel, wearing the demon hunter’s jacket, does, too, soon after Billy joins her in the barn at the Earp homestead. “You’ve been marked,” he says, shocked. “I said I was going to make it right. I want to make it right!” Inside the house, Waverly’s looking up the symbol and confirms a suspicion that it’s a cattle brand. It belongs to the family on the opposing side of the Earps during the shootout at the O.K. Corral back in 1881. “The Clantons are in Purgatory,” she realizes before she hears a scream.

She and Nicole hurry out to the barn. “If it’s coming for you, you can see it,” Billy warns Rachel, and it won’t stop until it shreds her.

That Reaper is what’s approaching Wynonna, where she’s trapped, but as Doc joins her, he can’t see it. Wynonna may not have her gun, but “you have me and mine,” he says, passing her one of his. She directs him, and they both shoot. The Reaper goes down … but gets back up. Doc kicks over one of the stone towers, and they run.

Waverly figures out Billy’s a Clanton. He promises he won’t hurt Rachel and even uses the pocket-knife she gave him earlier to extract a tooth from his mouth? “A soul for a soul. My soul for her soul,” he declares, his veins turning black. “We are rooted together, enemies and kin, but I sever that root and offer myself.” He collapses.

And the creature retreats. Wynonna’s safe … for now?

Billy reveals the new sheriff, Holt, and magistrate, Cleo, are his siblings. The Clantons will never stop coming for them, he warns Waverly before leaving. Wynonna, Waverly, Doc, Nicole, and Rachel regroup in the house. “I always knew they were a plague for which there is no cure,” Doc says of the Earps’ greatest enemy. That explains why the Reaper “hated [Wynonna] a lot.” Rachel is determined to save Billy, and Nicole promises they will, but they need a plan. First, however, they need to get the rest of their team back, starting with Jeremy.

And so Wynonna returns to Black Badge and tells Naomi she’s the best demon hunter the division has ever seen. She’s facing something extremely scary, and she needs her people back. Jeremy’s in, but he insists they keep his boyfriend, Robin (Justin Kelly), who’s “safe,” out of it. Before they leave, Naomi cautions her that while demons may be scary, “just wait until you meet upper management.”

As for the Clantons, well, now Margo has Billy chained up as he pleads with her to let the old ways die. “If we do not honor our past, we lose our future,” she says. But don’t worry. She won’t kill Rachel because he will. The Reaper approaches him, and Holt and Cleo can hear his screams from inside the home.

Billy’s siblings weakly try to come to his defense, but even they seem to know it won’t do any good. And we learn that Cleo’s the one who sent the Reaper after Wynonna as Margo presses down on the wound on her hand, causing it to bleed. Reapers aren’t attack dogs, they’re their ancestors, Margo reminds her. (And this Reaper was their uncle.) Margo is the Clanton heir, so she’ll dictate when they unleash hell on the Earps, especially with their plan already in motion.

“We thank our kin for this feast and for the sin that roots us,” the three say, holding hands. “The power of vengeance will damn our enemies. In the name of Clanton, we vow to never forsaken, never forget, and never forgive.”

Then, in the final scene, Nicole returns to Margo with a jar of something (possibly with her hair in it?). Doc and Waverly got themselves out of the Garden, she insists. “It’s over.” But Margo corrects her: “It’s just beginning.” And she lets something out of the jar that flies into Nicole. Uh-oh.

What did Nicole do to try to get Waverly back? And how excited are you to see the Clantons as the Earps’ enemy in the present?