Michael Keaton to Star in & Executive Produce ‘Dopesick’ for Hulu

Hulu has given a straight-to-series order to Dopesick, a limited series from Emmy-winning writer Danny Strong.

The 8-episode series will star Oscar and Golden Globe winner Michael Keaton, who will also serve as an executive producer on the project directed by Barry Levinson (Rain Man). Dopesick is based on the bestselling book of the same name by Beth Macy. 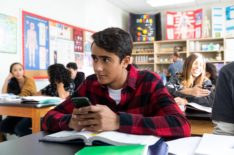 The series tackles America’s struggle with opioid addiction and explores the issue from various points of view ranging from a mining community in Virginia and the hallways of the DEA to Big Pharma in Manhattan. Dopesick puts a spotlight on the intersecting stories that reflect the battle going on during the worst drug epidemic in American history.

Keaton stars as Samuel Finnix, a doctor who has a kind and compassionate approach at his practice but finds himself entangled in Big Pharma’s deadly secret. This will be the actor’s first TV series regular role in 13 years — he last appeared in 2007’s The Company. “I’m so thrilled to tell this story with a company as bold and as daring as Hulu,” said Danny Strong in a statement. “The opioid crisis is one of the most important stories of our time and I’m honored to not only pay tribute to its victims but to shine a light on the heroes that fought back. Laws were broken and many lies were told. The system failed us and Dopesick is going to show everyone how it all happened.”