'The Bachelor: Listen to Your Heart' Episode 2: Trevor Is Accused Of Cheating (RECAP)

The Bachelor Presents: Listen to Your Heart is back for its second episode, which means we’re in store for more drama surrounding Jamie and Trevor, and new arrivals are sure to shake things up inside the mansion.

Following last week’s premiere episode, some couples have already started to form — a la Chris and Bri — while others are crashing and burning (sorry, Ryan and Jamie). Now with another week of dates ahead, and the guy’s handing out the roses, it’s safe to say it’s going to get chaotic.

Read on for a recap of tonight’s emotional episode.

Jamie And Trevor’s 1-on-1 Date

After going on a date with Ryan last week, Jamie decides to put her new romance with Trevor to the test and asks him to join her on a 1-on-1. In classic “struggling musician fashion,” the pair go busking in Venice, California. They decide to do a cover of Little Big Town’s “Girl Crush,” and needless to say, Jamie can’t help but swoon.

Things seem to be going well for Jamie and Trevor, that is until Natascha arrives at the mansion. Not only is she a new contestant in the mix, she already knows Trevor because she’s friends with his ex-girlfriend. Dun, dun, dun!

According to Natascha, Trevor and his ex called it quits because he cheated. “I wouldn’t want to see someone who does that to my girlfriend do it to other girlfriends. I feel like we’ve all been there, we’ve all been there to the point where we’ve been lied to, or been deceived, or been betrayed,” Natascha says.

While all this is being revealed at the mansion, Jamie and Trevor are still on their date in Venice. Trevor brings up his past relationship, but he doesn’t mention anything about cheating. Shady!

Natascha confronts Trevor when the pair return from the date and immediately asks him about cheating on her friend. Meanwhile, the other girls in the house fill Jamie in on what’s been going on while she’s been out.

“I never physically cheated on her, just so you know,” Trevor reveals to Natascha. “I ended up emotionally cheating on her.” Jamie is clearly upset, especially considering the fact she was open with Trevor about her past experiences being cheated on. “I finally had this feeling like everything I’d been going through was worth something and that it was amounting to something,” Jamie cries. 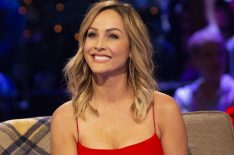 When Will Clare Crawley's Season of the 'Bachelorette' Resume Filming?

Chris Harrison opened up about resuming production on Clare's season.

After being confronted by Natascha, Trevor decides he needs to be honest with Jamie about what happened in his past relationship. He reveals he emotionally cheated and that his ex found some text messages he had sent to another woman. “I feel like we’re just scratching the surface, and I would hate for that to come to an end over something that happened a year and a half ago,” Trevor says. Despite being scared of being cheated on, Jamie forgives Trevor and decides to move forward with him.

Bri gets the next date card and asks Chris to go with her to Guitar Center. Because the date takes place at night (and the store is closed to the public) the pair gets to explore all the instruments by themselves.

Chris and Bri both try to tell each other how they feel through lyrics, which is equal parts cute and cringy.  “I’ve never had a connection with anyone like this ever before. I don’t know if she has either. There’s still so much that I want to know and slowly but surely layers are falling back. It’s incredible,” Chris says.

Bri then reveals she was engaged a year and a half ago, but her fiancé ended up calling it off. Despite the heartbreak, Bri says she already might be falling in love with Chris, and Chris says he’s falling too!

Sheridan gets the third date of the episode and decides to ask Julia. While Sheridan and Julia initially had a connection, she’s also expressed an interest in Brandon. “If it doesn’t go well though, I think that’s also going to give her more doubt and make her want to pursue Brandon and that connection a little bit more. So at the end of this date, we’re either going to be a couple or not,” Sheridan reveals. The pair go to a radio station where they end up as guests on Valentine in the Morning, a local radio show in Los Angeles. Not only do they talk about their feelings, but they also get the opportunity to perform “The Bones” by Maren Morris.

Savannah and Brandon’s 1-on-1

Savannah gets the last date card, and she asks Brandon to go with her. They go to a jazz club, where they open up, enjoy the music, and of course, go on stage to perform.

“Singing with Savannah is magical, I don’t know how else to describe it. I’ve never performed with anyone I’ve been dating, but the moment she started singing and I started singing with her, there was definitely some electricity that wasn’t there before,” he says. Two other new women arrive at the mansion, Mariana and Ruby, and they’re both ready to shake things up. Julia tells Sheridan she’s still interested in Brandon, despite the fact she likes him too. Brandon is clearly the hot commodity, as Mel, Savannah, and Julia are all after his rose.

Rudi kisses Ryan, but realizes she still has strong feelings for Matt. She tells Matt how she feels — and even slaps him? — but it looks like they might be back on.

Now it’s time for the roses. Chris gives his rose to Bri, Trevor to Jamie, Matt to Rudi, Ryan to Natascha, Danny to Bekah, Brandon to Savannah, Gabe to Ruby, and Sheridan to Julia. The three women sent home are Mel, Cheyenne, and Mariana.

From devastating breakups to finding true love, these memoirs from 'Bachelor' franchise favorites cover it all.

Next week, not only are the couples solidifying, but we’re going to get our first performances in front of an audience, famous musicians, and Bachelor Nation stars!