[Warning: The below contains MAJOR spoilers for the Season 1 finale of Nancy Drew, “The Clue in the Captain’s Painting.” If you haven’t seen it yet, head over to The Claw for some hangtime with Ace and come back when it’s safe… if there is anywhere safe about Horseshoe Bay.]

The sea may be calling out for justice on Nancy Drew, but as the iconic gumshoe (Kennedy McMann) wrapped her first season this evening, it was a very land-based baddie who faced the music for the murder of Owen Marvin (Miles Gaston Villanueva): Joshua Dodd, the half-brother of Dead Lucy, who we now know to be Nancy’s real mom with Ryan Hudson (Riley Smith).

What that means for Nancy and Carson Drew (Scott Wolf), the man who raised her after Lucy fell to her death 19 years ago, remains to be seen, since the season ended production earlier than planned due to the Coronavirus. And that is not the only mystery we’re left hanging with. The sea-spirit known as the Algeaca is still wreaking havoc, Bess (Maddison Jaizoni) is only just learning about the secrets of her ancestors and Ryan’s family has yet to learn that Nancy is a Hudson. Juicy! 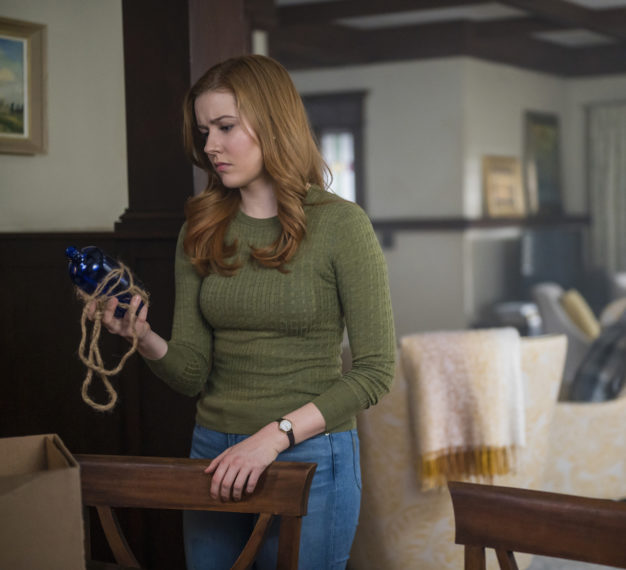 So in honor of the fantastic first season, with its scares, surprises and immensely likable ensemble, we chatted up star Kennedy McMann about life as the legendary literary detective and why it’s no mystery that fans have fallen so hard for this freshman hit.

Hey there, how are you?

Kennedy McMann: I’m great. I’m so happy to be talking to you!

I know. This is great. You survived your first season!

I know. It is, technically I guess, the whole thing, but you know…

Yeah, it’s a little different than the normal first season, but you got through it and you guys did great.

Thank you so much. It was such a blast. I really miss it already. I was so tired at the end, but now I’m like, “Can I get back to work?”

I’m sure. This whole season gave you so much great stuff to do, all of you, but you got a ton of great emotional stuff, especially near the end.

Oh my God, yeah. Which is just the biggest treat for an actor. I mean, that’s sort of why I do what I do…I just feel fascinated with human emotions and playing with them. So, it was the greatest gift ever to be given scenes like that. Yeah, it was a great challenge. And that scene between you and Scott.

I know! It was the worst to have to shoot that kind of stuff with Scott because I just love him so much. We have such a great relationship so that was devastating and so sad to look at him like that.

I spoke with Riley Smith last week and he said that he’d known all along about Ryan being Nancy’s father. Did you know going in?

I knew. I had figured out during the pilot about Lucy [being the mom]. I didn’t know for sure about Ryan, but as their romance sort of unfolded and as we kind of learned more about Lucy and Ryan’s relationship, then I put the pieces together.

Since the season is abbreviated, we don’t get to see any sort of closure or reconnection between Nancy and Carson, but this episode still works great as a season finale.

Yeah, I thought so too. That’s the nice thing about a lot of our episodes, most of them can kind of play like a season finale. But this one in particular I think sets it up really nicely for the rest of the Agleaca storyline and by kind of having all of the loose ends meet…

And reminding us that Nancy has more family than just the Hudsons. Once you brought Josh back in, I was like, “Oh God, that’s right. She comes from really twisted families.”

[Laughs] Oh, yeah. Totally. That’s a whole other can of worms. And they’ve kept it really hush-hush, but I’m incredibly fascinated by it because obviously they have the Sables, so Lucy’s mom and I guess the dad? Definitely Lucy’s mom and Joshua. And then the whole Hudson family. It’s going to be very interesting thing once they—or if they do—find out about Nancy. I’m really interested to see where they’re going to go with that. And the scenes you have with Martin Donovan are so funny because Everett is so dismissive of her. Wait ’til he finds out that she’s his granddaughter.

Yeah, those are always really fun because I feel like there’s something there. Obviously he’s so terribly evil, right? Just kind of point blank. But then, I think there’s something that he sees in Nancy, like, “You know what? Damn, that girl is good.” And I think that could come into play in a really interesting way if you were to find out.

Riley wants to see you two team up against him.

Oh, that would be great. I think that’d be great way for Ryan’s storyline to go. Because that character is so incredibly dynamic, too. He has so many places to go, both progressing and regressing in character growth. That could be very cool. Daddy Dearest? 'Well, he's been implicated in every murder on the show in some way, shape or form,' laughs the actor.

And now Owen (Miles Gaston Villanueva)… it’s a CW life-lesson: Never get too attached to anyone because they’re always really good looking and they’ll probably end up dead.

[Laughs] You just never know! I think his death is the perfect triple whammy for Nancy because she’s an escaper. When she has these sort of incredible emotional experiences or trauma, she runs from them or escapes them in whatever that may be. And that’s what Owen was for her, somebody separate from the group. Somebody she didn’t know all the details about and didn’t have to. And she could just run there and shut her brain off and feel good for a little bit.

So I think that being removed from her, him being gone now, that kind of escape room’s gone. It kind of forces her to deal with things. But it also sets it up nicely for her to remember just how much her very closest friends care about her and are willing to support her no matter what. And that is also a really wonderful journey for all of them. You really see her friends kind of stepping up for the rescue. And then you saw that Ace (Alex Saxon)…

Oh my god, we love Ace. And how honest she was about her habit of avoid things. That’s a level of self awareness that people need to have sometimes.

Yeah. For real. And she’s really developed that level of trust with Ace, which is kind of more trust than she has with anybody else in the friend group. Because he’s just been so consistently there for her and has given her a chance, too. That’s just a great part of Ace’s character, I think, that he’s a listener and I think that’s what she needs. She’ll open up on her own time instead of people poking and prodding and saying, “Tell me, tell me, tell me, tell me, tell me.” That’s not really the way to get to Nancy, I think.

Your executive producers Noga Landau and Melinda Hsu Taylor spoke with us about the fact that George (Leah Lewis) is now with Nick (Tunji Kasim), but they don’t have any intention of playing this like a girl-fight. They want it to be a look at two very modern women dealing with that on a level of where this is happening, but they’re not enemies.

I was so happy about that. When that whole storyline came up, I was so worried—not that I have any reasons to not trust our writers—that it would become this big thing where it’s like, “You stole my boyfriend.” I would hate that! It would make me so sad to have to play out that storyline. And so, when we got the scripts, it was so nice to see these young women just be like, “You know what? That’s great. That was something that didn’t work out for me for now, it’s working out for you, and you both are so happy.” And that’s what I care about because it’s about friendship first and valuing other people’s happiness. And it’s just so beautiful and so refreshing. Thank God. Had you seen any other advance scripts before production shut down? Did you guys know how the season was originally supposed to end?

Actually no. That was the last one, we didn’t get the next script. So who knows?

It’s kind of perfect because usually shows following that pattern of “This will be our mystery for this season and then we’re going to end it in the finale.” But the Lucy mystery ended a few weeks ago and then they led right into another one.

Yeah, it’s so funny. I remember reading probably the interview you did with Melinda and Noga about how they’re sort of subverting expectations when it comes to storytelling and when to expect certain things to happen. So it’s funny that this has happened this way, that we have this sort of early ending because of exactly that. It’s like, you just never know when these things are going to come to pass and it keeps everybody on their toes. It’s really fun that there’s such freedom to the mysteries that are in our world and that there’s always more and more coming. Nothing will ever be the same after tonight's bombshell.

Did you realize it was going to be this scary?

Yeah. I had no idea that it would get to what’s happening lately with all of the Agleaca stuff. Frankly, I never thought it would be this disturbing. This is really, my God, I think it’s awesome. I never expected that, and it’s really fun to dive into that as an actor. I wish I could watch the show without knowing exactly what happens. I’ve never been scared by the show because I know everything about it. [Laughs]

I mean, some of these things…when you coughed up the teeth, and then the wreath? That was horrifying to me because it wouldn’t stop!

[Laughs] I know! When I read that in the script, I was like, “That is so awesome!” It was probably the most intimate thing I’ve ever done in a room full of people. I think even I said to the crew when we finished, “And that is the most intimate I’ve ever been with you all.”

It is such a hoot to watch the show on Twitter because everyone was so into it. And the writers have really serviced all of you in the cast with great storylines. And so much comedy!

Yes. Yes. It’s such a unique balance. There’s a buoyancy. I mean, if you’d describe an episode to somebody, they will be like, “Whoa, that’s really heavy.” But you watch it and there’s just a bounciness to it. There’s a lightness to it. Everybody on the show is so funny and that humor is the key to the success of our show, in my opinion, because it just keeps so refreshing to watch.

Nancy Drew where to stream