No one could ever accuse Stassi Schroeder of being idle. The Vanderpump Rules star and Next Level Basic author is juggling quite a bit right now — she and fiancé Beau Clark just bought a house, which they’re renovating while out on the road on their podcast tour, Straight Up With Stassi LIVE.

Schroeder doesn’t seem too concerned about work-life balance, though. “There’s someone up there, some guardian angel, fitting my life into the perfect place,” she says. So it comes as no surprise that she’s added one more thing to her plate, figuratively and literally: a partnership with Real California Milk, serving up cheese at the opening of the world’s first “California-Based Dairy (CBD) Dispensary.” Get an exclusive first look at the two-night Season 24 finale, which sees the Bachelor torn between Madison and Hannah Ann.

Schroeder took a couple minutes off from her packed tour schedule to chat with TV Insider about wedding planning, home ownership, and the future of Vanderpump Rules.

Congrats on buying your new house! You’re all moved in now, right?

Stassi Schroeder: We are! Going on the tour, this worked out perfectly. I’ve moved into this house, then we left to go on tour for a month straight. And while we’re gone, I have my stepdad who’s the contractor there, I have painters there. I’m getting so many things done while I’m gone. If I had been there, oh my God. I would have had to check into a hotel. There’s no way I would have been able to handle living in a house while I’m renovating it. So it’s been working out very well.

Do you feel different now, being a homeowner? That’s a big life step.

I feel more stressed! No one really warns you about the process of buying a home, and how much stuff you learn. The cost of things to repair and renovate. If something breaks, it’s up to me and Beau to figure it out. I don’t have a landlord to call. But even being in the house for those few days before I left to go on tour was the three best days of my life. It just felt so good.

What are you most looking forward to with the house and your renovations?

I’m most excited about it being done! And being able to say, “I’m not leaving my house. I’m not going anywhere. I don’t care about your birthday party. You can come to me.” That’ll be pretty fun.

What made you decide to do your podcast tour again?

I’ve always been so scared, doing something like this, because I’ve loved to go to comedy shows and I love watching standup comedy. People who can get up there and try and make people laugh have to be some of the ballsiest people in the world! It’s terrifying.

At the 2019 Glamour Women of the Year Summit, the Bravo star talked her evolution and 'Vanderpump Rules' Season 8.

Then once I started doing the live podcast, I’m not doing stand-up comedy, but I am standing up there and interacting with the audience and seeing their reactions. It’s just such a different platform that it was just so much fun. So as long as people are still willing to buy tickets and come out, I’m going to keep doing this. Because normally I do a podcast and you just send it out there, and you don’t know how people are reacting to it. You’re not watching them listen to it. So it’s just been really, really cool.

You’re so busy with your podcast tour, your new house, your wedding planning. Why was now the right time to partner with Real California Milk?

Honestly, it came at the perfect time, right before I left for tour. I feel like I spent all of my years on Vanderpump Rules and on my podcast talking about how if I had to just pick one food group for the rest of my life, it would be dairy. So when Real California Milk started talking to me about this, I was like, “Yes, sign me up!” Because I could live off of cheese all day for the rest of my life. Beau and I have even had discussions — because I’m not a sweets person, I’m like, I don’t even need a wedding cake. If I just had a cake that was made with blocks of cheese, that’s something I would totally do. Speaking of wedding planning, what have you been learning about that process? Do you have any advice that you can share with other brides-to-be?

Right when I first got engaged and Beau and I started planning the wedding, we thought we were going to be really extra-involved. Then as the process went on, we both realized we don’t have the time to devote to being that involved. So we picked our venue, our location, our hotel. We both made our own Pinterest boards of inspiration and handed that off to our wedding planners. And we’re letting [them] just take it from there.

Oh, yeah! He has a lot of opinions. Is the plan still to get married in Rome?

That is the plan. Obviously with coronavirus and everything that’s happening, we’re taking it very seriously. We’ve had a lot of discussions with [each other], with our wedding planners, with family and friends. The only thing we can do right now is take it day by day and see how things develop.

Life happens, so we’ve mentally and emotionally prepared ourselves to cancel the wedding if it needs to happen, and we get married, I don’t know, in a frickin’ courthouse in L.A., then it is what it is. Right now all we can do is keep planning for the wedding we hope we’re going to have.

Yours is the fourth wedding to appear on the show. Have you learned anything from those past weddings? Anything you’re going to keep off-limits to the cameras?

I didn’t go to Scheana’s wedding, but I was in Katie and Tom’s, and I was in Brittany and Jax’s. I saw that the cameras really do leave you alone for the most part on your wedding day. They are just flies on the wall. Everyone had the best experiences in terms of filming the show with their wedding that I feel totally comfortable and fine with it. Where do you see the future of Vanderpump Rules going, now that you and most of the OG Crew are not at SUR anymore, and there’s all these new people? How do you see it all coming together in future seasons?

This season feels very different: Vanderpump Rules started because it was about Lisa [Vanderpump] and her restaurant, the staff and group of friends who worked [there]. So what happens when that original group of friends starts growing up, and they’re not working there anymore? What does that mean for the show? Because the show is about SUR and Lisa.

If it were up to me, I would be like, why don’t we just split off into two shows? You could do Vanderpump Rules, with the new people that are now working there, and follow the original cast members, because they’re my actual friends. In a dream world, that would be amazing. I have no idea what the future looks like for that, but I think we’re all a little confused. Everything We Learned From the 'Love Is Blind' Reunion (VIDEO)

Find out who's still together, who's giving it another shot, and who's single.

Do you have advice for the new SUR employees? Do you feel a little bit maternal, even, or see your younger self in them?

I wish I could say that I feel maternal, but I don’t! It’s kind of a rite of passage to have to go through that s**t. We all had to do it. We all had to suffer through Season 1 and not know what we were doing. We were all completely broke and confused and scared. We did it, so you guys now have to do it! 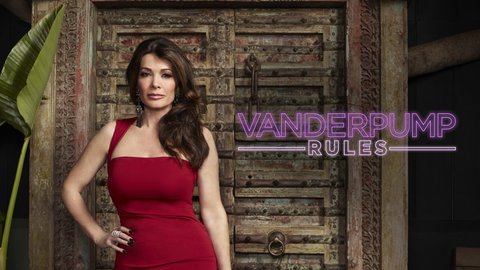