Hetty Returns to ‘NCIS: LA’ With New Tricks to Help Callen Face His Past

The past returns with a vengeance Sunday for Special Agent G. Callen (Chris O’Donnell). Luckily, he has boss Hetty Lange (Linda Hunt) on his side, and she’s committed to keeping him safe.

“She’s been a part of his life since he was 5 years old, when his mother was killed,” says NCIS: Los Angeles writer and supervising producer Andrew Bartels. “She’s become that mother to him.”

The episode’s title, “The Circle,” “refers to the circle of revenge — specifically the blood feud between the Callens and the Comescus,” Bartels says. That would be the organized crime family once hunted by Callen’s grandfather George, a U.S. intelligence agent with the OSS. These violent Romanians would go on to murder George and his daughter, Clara — Callen’s mom — who worked for the CIA.

Now a new Comescu poses a potential threat to Callen and his loved ones, and Hetty, who was the CIA handler for his mother back in the ’70s, “has to be involved because she’s so intertwined with Callen’s family history,” Bartels explains. “Hetty needs to be there for him.” So it may be a good thing “she’ll be up to her usual tricks, but also she’s got some new tricks up her sleeve.” This is Hunt’s first appearance since December 1 (the actress has scaled back on work since a 2018 car accident), and fans always welcome her presence — and her talent. “She can give you so much with so few words,” Bartels says. “Just with a little twitch of her eye, you can see the guilt her character feels for what happened with Callen and his mother.” 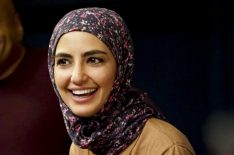 Hetty’s investment extends to all aspects of Callen’s life, including his romantic relationships, and the episode also brings back Anna Kolcheck (Bar Paly), the Russian-American ex-girlfriend he left behind in Cuba last season. “He’s been thinking about opportunities he’s let pass by, and one of those regrets is Anna Kolcheck,” Bartels previews. “He’s been looking for her, hoping maybe he can fix that.”

That’s easier said than done, given the complicated nature of their relationship. “They’re both these special agents with crazy lives and their missions are going to come between them,” he says. “They’re going to try to support each other as much as they can but the nature of their job, they have to keep secrets from each other. It’s very difficult to keep a romance and a relationship in that way, but they keep trying.” But when the reunion happens, it’s not what Callen was hoping for — experienced government agent Anna is all business. Notes Bartels: “She’s not here for romance at first.” We’re going to pin our hopes on those last two words.