‘Shameless’: Ian & Mickey Have the Talk, Liam Finds a Role Model & More From ‘Which America?’ (RECAP)

[Warning: The below contains MAJOR spoilers for Season 10, Episode 3 of Shameless, “Which America?”]

Another entry of Shameless means more Gallagher family drama, which is especially apparent in the most recent episode, “Which America?”

Things pick up where they left off as the family tries to access funds Debbie (Emma Kenney) funneled into debit cards for them, but when the transactions don’t go smoothly, the predicaments get even more out of control. Below, we’re breaking down all of the major moments straight from the South Side. Frank (William H. Macy) is the first Gallagher who tries to use his card, stocking up on liquor and snacks, but the card is declined after he just activated it. Confused, Frank and Mikey (Luis Guzman) try to figure out why they’re booze-less and still broke. The answer? Debbie used Frank’s social security number to open the card, rendering its fund useless to him with all of his outstanding debts.

In an effort to obtain some cash, Mikey leads Frank to Debbie’s secret storage unit he discovered in the previous episode and the Gallagher patriarch is impressed with Debbie’s scheming. It doesn’t stop him from taking some of the goods and heading off to the Alibi, asking Kev (Steve Howey) and V (Shanola Hampton) if they can sell the items in exchange for cash he can spend at the bar. Of course, his outstanding debts there lead to no money in his pocket, and when Mikey experiences medical distress — painful urination and yellowing of the skin — Frank’s plans veer off course as he accompanies his friend to the veterinarian. There, Frank learns Mikey has advanced kidney disease and goes through dialysis at the vet. As the medical professional begins his work, they discover Mikey’s port is majorly infected (it will make you want to hurl). In order to proceed, the vet requests money, and so the men venture to Debbie’s storage unit for more raiding.

After they manage to clean her out and gather some dough, they fix Mikey’s mixed-up state. They end the episode by throwing a rager at the Gallagher home, and we can think of a few people who aren’t pleased by this. 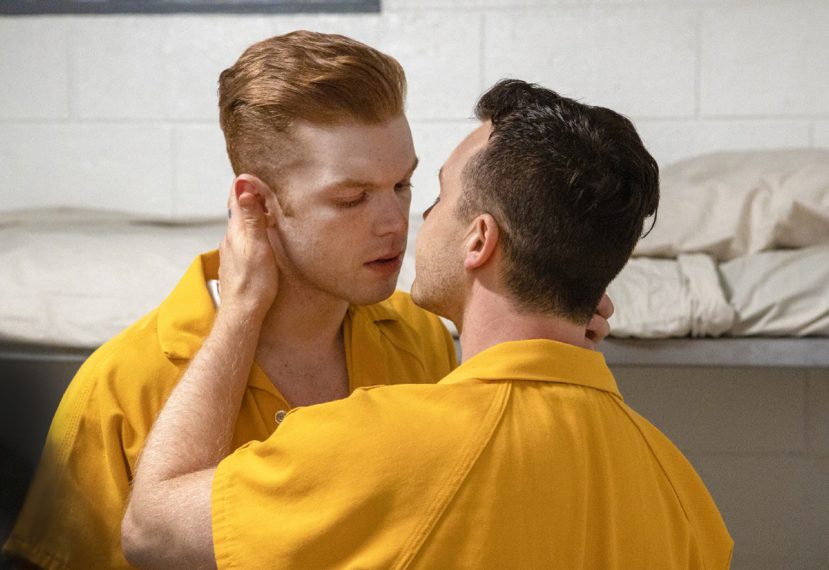 The bickering between Ian (Cameron Monaghan) and Mickey (Noel Fisher) continued as they stayed on opposite sides of their cell. When Ian receives a letter stating he has an upcoming parole hearing, he’s hopeful he may get out of the joint soon, but then Mickey’s quiet reaction leads Ian to confide in some fellow inmates. They tell Ian about “the talk,” which means discussing what his plan is with Mickey if one of them is on the inside while the other is released.

When Ian tries to bring it up, Mickey gets upset and implies he’d like Ian to do something so he’d have his parole taken away. When Ian asks if that’s what Mickey wants, Mickey says he threw his life away to be in there with Ian and wanted a similar gesture from him but didn’t want to ask. Later on, when Ian learns about Lip’s (Jeremy Allen White) new baby and Tami (Kate Miner) being in the hospital, Mickey begins to have a change of heart. We see Mickey go to some of the prison’s older inmates — friends of his ex-convict father. When he reveals the predicament, they tell Mickey that he shouldn’t keep Ian from being released if he has the chance. That decides it for him, and so when Ian attempts to stab an inmate to ruin his chances of release, Mickey and some other guys drag him away.

Mickey says he shouldn’t have asked Ian to stay, and as a means of making up for his poor request, Mickey manages to snag a smart phone with a bribe allowing Ian to Facetime with Lip and baby Fred in a scene that’s sure to conjure up a few tears. After fans were briefly introduced to Liam’s (Christian Isaiah) family down the block, we see him return to the volatile house where he meets Mavar (Anthony Alabi). At first the man tells Liam to leave considering his Gallagher connection, but Liam argues that he doesn’t have anyone to help guide him in his journey as a black man in America. “A black man in need is a black man in need,” Mavar agrees, and so he takes the youngest Gallagher sibling under his wing.

Along the way they discuss the challenges of what it means to be black in various aspects of American society. We learn that Mavar sells used cars and supports the LGBTQ+ community through activism. He takes Liam to a White Sox and Cubs game in which V tags along.

When they return to the Gallagher house at the end of the night, the rager Frank is throwing leads Mavar to invite Liam home with him. It sounds like Liam will be living a luxurious life with his newfound family, but that remains to be seen. Like Frank, Lip runs into some issues when his social security number is used for the debit card as he has outstanding student loans from when he was in college. When he goes to the garage in order to ask for an advance in his check, Cami (Melissa Paladino) informs him that the IRS called and his check is going to be garnished by half, leaving him with a fraction of the pay.

Later on he takes Fred to visit Tami, who is sitting up but not in the best spirits when she learns Lip brought the baby. She claims she’s a mess meeting him, but also says that the boy is the most beautiful being she’s ever seen. Yet when Lip tries to hand Fred over, she claims it hurts and passes him back — could it be postpartum depression?

During their chat, Lip wonders aloud if Tami will be back at work soon, but the nurse nods “no” over her shoulder, giving Lip a presumably sinking feeling. When he arrives home to Frank’s party, he opts for Kev and V’s Alibi overnight where he talks to Ian on the phone.

The Rest of the Gang As for Debbie, she discovers the function of unions when arriving to work one day, and after her quick dive into the benefits she could gain, she becomes the unofficial leader. Later on, when she shows up to work and finds her coworkers picketing, she learns that no-pay from strikes could last for months — in other words, she’s not so much for unions after that. But she has bigger problems when she discovers Frank and Mikey stole her stock from the storage unit — will she get find the justice she’s seeking? Carl (Ethan Cutkosky) continues to work at the Shrimp Shack, and while business is booming for him and Anne (Chelsea Rendon), Lori (Sarah Colonna) makes things awkward when she comes onto Carl. Anne bursts into the door when Carl tries to back away from his employer, claiming he loves his girlfriend Kelly (Jess Gabor). Later on though, he reveals he really likes Anne and offers to help her family make tamales for their food business in order to spend more time with her. He fails but wins Anne over in a way. Will it turn into anything more? Finally, Kevin holds a Bachelor-esque type competition in which he attempts to find a new best friend for V when he learns she’ll be spending the day with Mavar. He finds his candidates through Tinder, and while the plan falls apart miserably, one straggler does connect with V, making his efforts worth it.

Don’t miss what the Gallaghers are up to next when Shameless returns next Sunday on Showtime.